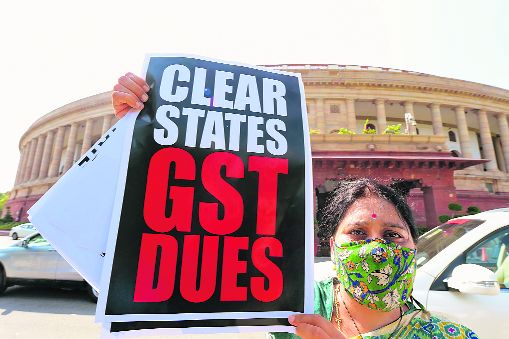 Dodgy: The Centre has played fast and loose with its commitments on GST compensation to states. PTI

Haryana has a new law. If there are four private sector jobs available that pay up to Rs 50,000 a month, three of those will have to go to ‘locals’. Much punditry has been expended on it, mostly against the decision. What interests me is the inherent revolt by the BJP-led government of Haryana against the Modi government at the Centre.

Modi was the first Prime Minister in three decades to get an absolute majority. He was the first one to repeat the feat since Indira Gandhi in 1971. All other governments have depended on regional parties to stay in power. This has ensured that India’s inherent federal structure has remained intact. Indeed, in the coalition years between 1996 and 2009, when no party crossed 200 Lok Sabha seats, state governments acquired significant heft in deciding Central policies.

Since 2014, a single-party majority, along with BJP governments in most states, allowed PM Modi to increasingly concentrate power at the Centre and weaken federalism. GST was a prime example, where a supposed ‘one nation, one tax’ took away the rights of state governments to decide their own tax policies. The new farm laws are another example of this push towards centralisation of governmental authority. They give the Centre the powers to override any laws passed by state legislatures.

The Modi government’s ‘electoral economics’ has also come at the cost of states. A chunk of its additional revenues come in the form of cesses and surcharges which do not need to be shared with state governments. It has played fast and loose with its commitments on GST compensation to states. Its policies of targeting handouts and benefits to the poorest under various schemes — PM Awaas Yojana, PM Kisan, PM Ujjwala Yojana, PM Fasal Bima Yojana, PM Jan Dhan Yojana, PM Matri Vandana Yojana — might have been routed through states, but in the minds of the voter they are identified with Modi.

At the same time, various failures on the economic front have landed on the door of state leaders. So, we have seen BJP failing to form governments in various states which had overwhelmingly voted for Modi. Unemployment appears to be one such issue, where voters hold state governments responsible. Opinion polls during the 2019 Lok Sabha elections suggested that the lack of jobs was the biggest electoral issue. Yet, an overwhelming majority of those surveyed believed that the PM was not to blame for job losses.

This has caused a series of tensions between the Centre and states, including those ruled by the NDA. States have virtually no autonomy when it comes to economic policy, yet they face the blame for a bad economy. We saw some state governments flexing their muscles during the Covid lockdown months, stopping migrants at their borders, limiting who can enter, even talking about restricting medical help to locals. In effect, they were saying, our job is to look after our own people, not those who come from outside.

The ‘outsider’ metaphor has always been an emotive political issue across India, whether it is Maharashtra, Karnataka, Assam or, now, West Bengal. It should be seen as an aspect of the perpetual tension between the Indian nation-state’s tendency to centralise and the various linguistic sub-nationalities to exert their autonomy. Local citizens believe that they should have the first right over jobs and resources in their ‘own’ land, and they get frustrated when the jobs go to migrants from ‘outside’ who are willing to work for less pay. Sub-nationalisms, therefore, often express themselves in the arena of jobs and education, which disappear as issues when the same ‘citizen’ deals with the Central government.

So, despite all the talk about ‘one nation, one market’ by the Modi sarkar, governments in BJP-ruled states have to cater to job-seekers in their own states. After all, when it comes to voting for Assembly elections, migrant workers will take leave and go back to vote in their home-states. Unemployed locals, in turn, will vote with their feet.

Haryana’s case is especially precarious when it comes to unemployment. Take the data collected by the Centre for Monitoring Indian Economy during September-December 2019, to avoid any distortions caused by the Covid-induced recession. Unemployment level amongst people in the state, who were willing to work, was 24%. The situation was even more stark when one looks at those between the age of 20-24 who are willing to work. The unemployment rate for such young people in Haryana was an incredible 70%.

One way to solve this problem would have been to create more government jobs and fill vacant posts in government and semi-government organisations. However, since state governments have no money and Central disbursements are contingent on how well they control their fiscal deficits, more government jobs are out of the question. In such a situation, the BJP-JJP alliance in the state has no option but to play on regional sentiments. What use are the shining buildings of Gurugram and the offices and factories in the state, if the people of Haryana don’t get jobs?

Industry bodies and commentators will criticise this move to reserve jobs for locals. There are many provisions in the new law, which smack of a return to inspector raj. The cost of doing business will go up because of the massive compliance requirements the law introduces. There is a genuine danger that some companies might choose to quit Haryana. Some say this will destroy Haryana’s impressive growth story. But politicians know that when it comes to state elections, you can’t sell growth that provides no livelihood.