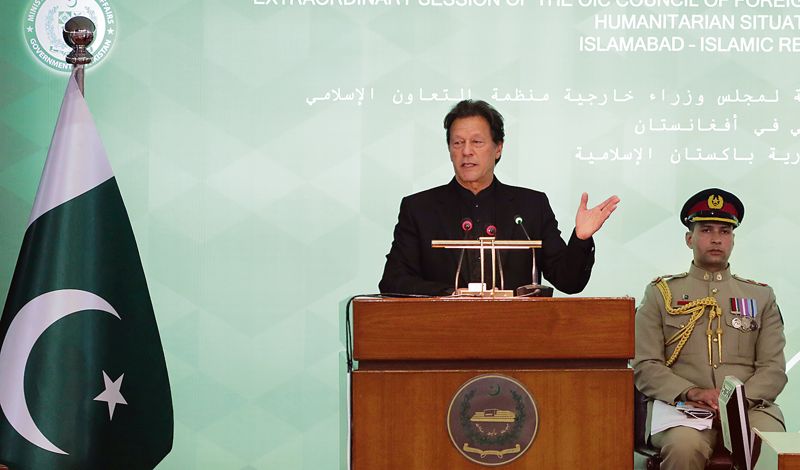 Unacceptable: Imran Khan’s statements backing Taliban’s practices will not be welcomed by the US, its European allies, and even many Islamic countries. AP

I mran khan has the dubious distinction of being Pakistan’s first PM to create rifts between army chief General Bajwa and an ambitious ex-chief of the ISI, Lt Gen Faiz Hameed, who is hoping to succeed General Bajwa on November 1, 2022. Hameed had earned international notoriety by using coercive powers of ISI proteges in Afghanistan, the notorious Haqqani network, for driving out Mullah Abdul Ghani Baradar from Kabul to Kandahar. Baradar was set to be appointed as the new PM. What followed was the installation of a new Afghanistan cabinet in the presence and involvement of Hameed. While Imran Khan backed this arrangement, it could well herald new problems for him. There is no way that Hameed’s successor, Lt Gen Nadeem Ahmed Anjum, would play to Imran Khan’s tunes.

Pakistan has used every conceivable move to benefit from global concerns arising out of Taliban rule.

All this is happening as Bangladesh is marking the 50th anniversary of its liberation from Pakistani occupation. Bangladesh has done far better than Pakistan in most economic indicators. It has also done well in maintaining good relations with its neighbours in South and Southeast Asia. This is different from Pakistan, with its pretences of being a leading champion of radical Islamist organisations worldwide.

Not surprisingly, the foreign ministers of Afghanistan’s five Central Asian neighbours — Kazakhstan, Tajikistan, Turkmenistan, Kyrgyzstan and Uzbekistan — prematurely left the Islamabad ministerial-level conference of Islamic countries to attend a foreign ministers’ meeting in Delhi to discuss regional cooperation and problems arising from Taliban rule in Afghanistan. Other invitees included middle-level representatives from the US and its allies. The Islamabad conference was inaugurated by Imran Khan. Not much aid can, however, be expected from most of those who participated, apart from an initial contribution by Saudi Arabia, as a founder of the OIC.

Pakistan has used every conceivable move to benefit economically from global concerns arising out of Taliban rule by taking centre stage diplomatically. There are, however, serious challenges Imran Khan faces because of his own domestic problems. His statements backing Taliban’s practices, like denying employment opportunities and education to women, will not be welcomed by the US, or its European allies, or even by many Islamic countries. Talks are underway for providing international economic assistance to Afghanistan. India, Iran and their Central Asian partners should devise measures for increasing the use of Chabahar Port in Iran, as a transportation corridor for relief supplies to Afghanistan.

The next two years are going to be crucial for Imran Khan, as he prepares for the 2023 general election. Even prior to that, a decision has to be taken on who is to be Pakistan’s next army chief. It is no secret that there is no love lost between Imran Khan and the present army chief. The differences were out in the open recently, when Imran Khan had to eat a humble pie and implement the army chief’s decision to transfer his favourite, the former DG ISI, as a Corps Commander, while accepting the army chief’s nominee, Lt Gen Nadeem Ahmed Anjum, as the new ISI chief. Despite Pakistan’s claims about its role in the US ‘war on terror’, it has been accused of aiding the Taliban. Imran Khan regretted Pakistan’s decision to join the ‘war on terror’, describing it as a ‘self-inflicted wound’. Interestingly, after milking the US for economic and military aid for over two decades, Pakistan is now feeling disappointed with Washington.

India did well to avoid getting involved militarily in the ‘war on terror’ in Afghanistan, though it did provide defence and economic assistance to elected Afghan governments. However, US President Biden retains warm feelings for Pakistan. This was evident when he invited Pakistan to his much-touted ‘Summit of Democracies’, while ignoring the fact that the army remains the lead player in Pakistan. While doing so, Biden chose not to invite established democracies in South Asia, like Sri Lanka and Bangladesh. Obviously under pressure from China, Imran Khan turned down the invitation. These are developments that India has taken note of. The recent visit of Russian President Putin to India made it clear that India intends to safeguard its strategic autonomy. New Delhi cannot be coerced by Biden on who its friends and strategic partners should be.

Interestingly, Taliban soldiers recently disrupted an attempt by their Pakistani counterparts to fence the Pakistan-Afghanistan border along the disputed Durand Line. This is a border imposed on Afghanistan by the British. Afghan defence ministry spokesman Enayatullah Khwarizmi described the Pakistani border fence as ‘illegal’. The entire incident was videotaped by the Afghans. One wonders how Pakistan and its Taliban protege Sirajuddin Haqqani will react in future to such incidents across the disputed 2,600-km border.