How Punjab’s farmers rose to the challenge

Punjab’s farmers were not intimidated by the virus. They proved that they are critical to sustainable national food security. They need to be stimulated to improve productivity as relevance of agriculture as an employer has been reasserted. 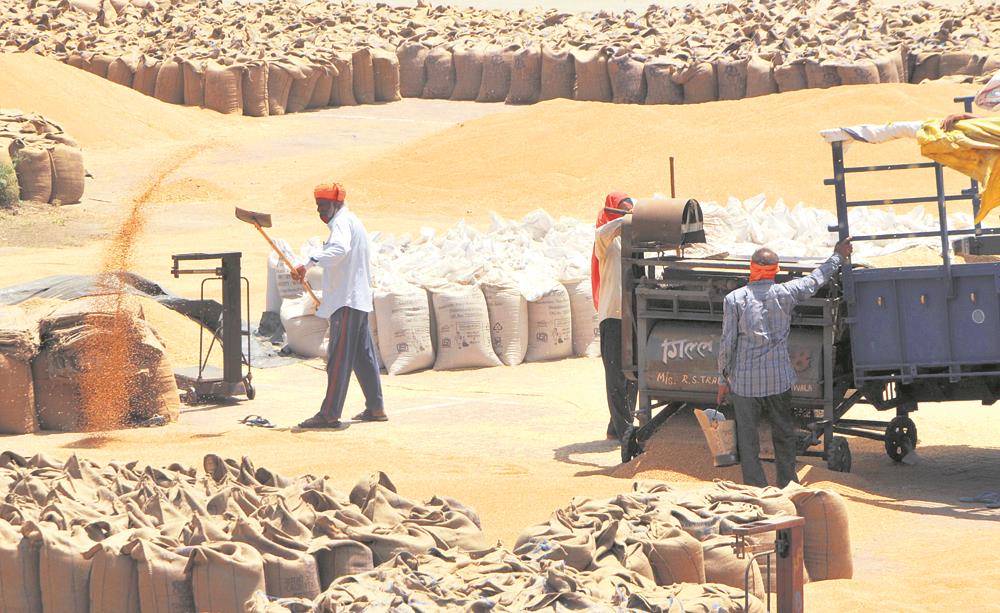 Tough task: Wheat was lifted without causing spread of Covid-19.

Two major challenges encountered in Punjab during the current pandemic were wheat harvesting and migration of workers. The security of life and the livelihood of millions of people dependent on agriculture were threatened. But, Punjab’s indefatigable farmers have defeated the nasty coronavirus, sustaining the state’s rural economy. “Coronavirus is the creation of riches,” believed many of the farmers who remained steadfast in mandis. No case was reported in any of the 4,000 purchase centres that were frequented by about 13 lakh farmers, labourers, transporters and arhtiyas.

As many as 35 lakh hectares of land was under wheat cultivation during the rabi season for 2020-21, with an expected production of 182 lakh metric tonnes (MT). The estimated output value was Rs 35,000 crore. Initially, it was apprehended that there would be no storage space for the coming produce, but the pandemic brought first relief by way of speedier movement of foodgrains warehoused in Punjab.

Suddenly, the demand for food increased in deficit states, and the Railways, hitherto reluctant to move the grains out of Punjab, were compelled to move it much faster than they ever did. Since March 23, 1,553 goods trains were loaded and moved out of Punjab, vacating the space for 40 lakh tonnes of foodgrains despite the curfew and lockdown. The demand for food was so pressing that even freshly procured wheat was dispatched directly to other states through the Railways.

Government procurement agencies purchased the marketable surplus of 127 lakh MT of wheat, which is nominally less than the previous year. This has happened because the farmers were asked to store their produce for some time and bring it to the markets in a staggered manner, ensuring compliance of Covid-19 regulations. In some parts of Punjab, the yield per acre was also low because of untimely rain in March end and April.

The farmers received a remuneration of Rs 23,600 crore, a boon for the state’s economy. In the process, farm labourers, mandi workers and transporters also earned their livelihood and the state its legitimate revenues.

The procurement of wheat, considered a herculean task, has been successfully completed without the spread of apocalyptic Covid-19. The state departments of agriculture, food and civil supplies, health and police, and the state Agriculture Marketing Board, with the active participation of the district administration, prepared and rehearsed the procurement plan several times before finally launching the operations on April 15. Demonstration videos, information, education and communication (IEC) activities were also initiated to create awareness amongst all stakeholders, including farmers, farm labourers and arhtiyas. For once, even the much-touted redundancy of arthiyas, i.e. the commission agents, was legitimised.

The procurement plan of the state Agriculture Marketing Board envisaged an increase in the number of purchase centres from 1,800 to 4,000; access control and regulation through e-passes; procurement by invitation; limiting the numbers of farmers per centre; limiting the arrival and purchase of wheat stocks per centre per day; provision of healthcare facilities; provision of touch-free drinking water dispensers and sanitisers, masks and hand hygiene. The floor grid planning of all mandis was also done, allowing only one farmer to heap his produce in a particular cell of the grid.

The producers, despite their anxiety about weather conditions, maintained discipline; they followed the norms of social distancing, wearing masks and sanitisation. In return, they achieved timely sales of their produce. Almost all of them returned home the same day and received timely payment. The stocks procured were also lifted quickly and stored properly with no hassles of transportation. The procurement operations provided an opportunity for the transporters to earn their livelihood for some time as their other operations were completely shut down. Only 3,000 trucks moved per day during the period till Lockdown 3.0 in a state that has a fleet of over 3 lakh registered truckers.

The procurement enhanced the livelihood options for the local farm workers. Nearly 4.5 lakh workers were involved, a majority of them were local and MGNREGA workers as most migrants were distressed and anxious to return to their native places. As per official figures, there are about 2.5 million migrant workers in the state. They work both in agriculture and industries. Over the years, a large number of them has been absorbed in the organised sector. During the pandemic crisis, about 13 lakh registered on the state’s web portal to return to their native places. Their rights and liberties were respected by the state administration that decided to arrange for their food, shelter and pay for the cost of their journey back home.

Strangely, some state governments were hesitant to give their consent to receive them, a condition that was later withdrawn by the Government of India. The Punjab government arranged 375 trains at a cost of Rs 26 crore to ensure a safe return of 4.83 lakh migrant workers. They were compelled to walk not because of food insecurity but because of emotional insecurity and inadequacy of policy response. The policymakers failed to realise the import of such a vital input in our economy.

In hindsight, the pandemic crisis has reinvented the local labour market. The urgency of livelihood compelled the rural labourers to realise their full potential for the financial security of their families. Even the contribution of domestic labour was availed of to secure crops and maximise livelihoods. In this manner, the employment of local labour became more pronounced than ever before and in times to come, the depleting relevance of local human resources in farming may not remain an issue.

Covid-19 has reinforced the legitimacy of the MSP-based procurement of foodgrains. The country was comfortable managing the pandemic devastation due to the sufficient availability of food stocks. The debate on the discontinuation of MSP operations has been rendered shortsighted. Even the recent recommendation of the CACP to phase out MSP is seen as unmindful of the crisis of poverty and hunger that this country may face at any point. The farmers of Punjab had opposed the discontinuation of MSP. The continuation of MSP, as proved by the current crisis, is a prerequisite for national food security.

Punjab’s farmers, though alarmed, were not intimidated by the novel coronavirus. They have proved that they are critical to the long-term durable and sustainable national food security as also the economic development of the country. They need to be stimulated financially and technologically to improve their productivity as the relevance of agriculture as an employer has been reasserted.

Amid the pandemic, farmers should have received bonus for decreased yield and staggered sales, but still, they have lived up to the expectations of the nation, that could face a crisis with more confidence and internal stability on their strength and resilience.