How Ranjit Singh kept the invaders at bay

Why did Maharaja Ranjit Singh, whose death anniversary falls today, remain unconquered? It was owing to the ruler’s fair-mindedness, objectivity, impartiality and the ability to rise above narrow clan, community, caste, communal or other negative characteristics which afflicted numerous princely rulers of Hindustan. 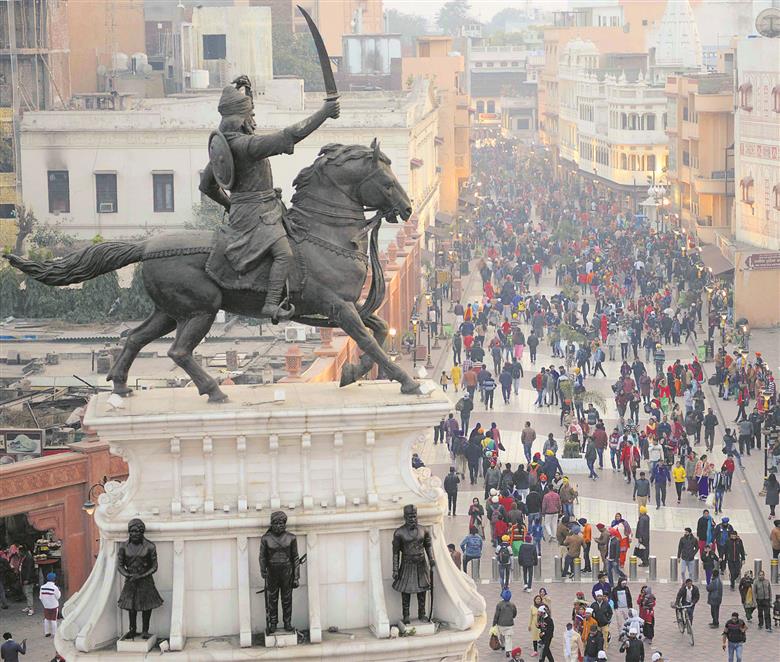 Towering legacy: Maharaja Ranjit Singh would have been disappointed over India’s failure to protect its own territory.

LAHORE was the capital of the empire of Maharaja Ranjit Singh, that rare strategic visionary and victor in the midst of falling, failing, vanquished, vassal and semi-vassal rulers of South Asia. It was a success needing neither corroboration nor endorsement from anyone. No Western foreign trader or aspiring ruler dared to mess with his realm. He lost a few tactical battles but invariably emerged victorious in war, and ended unconquered, a feat achieved neither by any indigenous ruler before him nor those who succeeded him.

Ranjit Singh (1780-1839), whose 181st death anniversary falls today, was a victor because of a rare geo-strategic vision of security, intrusion and recurring foreign invasions of Indian territory. Another unpleasant reality, it may look to some. None of the numerous indigenous rulers of his time, or those in succeeding generations, across South Asia, could effectively stop the British juggernaut during their rule or unite the subjects or neighbours in vicinity to effectively counter the outsiders like the French and the Portuguese.

The astute Ranjit Singh certainly learnt the lessons of history fast— the magnetic attraction of the Indian soil to suppress the simple subjects, marked by loot, pillage, plunder and occupation by the foreign invaders. Understandably, going on the offensive was the best defence for Ranjit Singh, Misldar of the Sukerchakia Misl.

Being a landlocked state, the threat to his realm loomed large from the south (Delhi), west (Kabul-Kandahar) and north-east (Kashmir and beyond, from Kashgarh). Hence, to stop the British advance to the Punjab from south, the Treaty of Amritsar was concluded on April 25, 1809, thereby making Sutlej the river border. The British remained still, till the Maharaja’s death. Thereafter, followed Kangra, Multan, Kashmir, Attock, Afghan territory and Sindh, one by one. What’s important is that Ranjit Singh rose from nowhere to establish a “kingdom large in extent and rich in fame”, a ruler who checked foreign invasions and traditional, aggressive ruler-cum-looters. In the process, however, Ranjit Singh attracted criticism from several quarters. Indeed, he can be criticised because warfare and conquest were his forte.

But, one has to recall that the first half of the 19th century was an era of war and bloodshed across South Asia, wherein everybody was fighting everybody. There were regional rulers galore, all in disarray, facing the Western foreign ‘trader rulers’ and the Delhi Durbar was in veritable decline. The subjects were on the verge of ruin and subalterns were on the run, from region to region.

The choice for Ranjit Singh, therefore, was limited. Either stand, fight and perform or retreat, escape and perish. Ranjit Singh chose to fight and, therefore, stood out in the chapters of post-Mughal history as one indigenous ruler who died unconquered. He stopped the foreign invasions and took the battle to the enemy camp — from Punjab to Kashmir and beyond; from the Sutlej to Sindh; Kandahar to the borders of Persia (Iran). The lion’s reign constituted a glorious, inimitable period, of the sole indigenous ruler of South Asia.

The question is: how and why did Ranjit Singh die unconquered? Not humiliated, disgraced or vanquished? It’s owing to the ruler’s fair-mindedness, objectivity, impartiality and the ability to rise above narrow clan, community, caste, communal or other negative characteristics which usually afflicted the numerous princely rulers of Hindustan. A glowing tribute to Ranjit Singh came from a German, Baron Carl von Hugel: “Never perhaps was so large an empire founded by one man with so little criminality.” However, there was another serious criticism against him, that “he created a Sikh kingdom but took no steps to prevent British dominion.” Yes, theoretically correct but not practically. History shows that no landlocked country can aggressively take on a naval power with an army. Afghanistan is an exception, though it too cannot go on the offensive, except for defence or a counter-attack.

Now, what would have been Ranjit Singh’s take on the 73-year-long road traversed by India? A job the Lion of Lahore is best remembered for? Defending the country and stopping foreign invasions? Surely, Ranjit Singh would have been sorely disappointed to see a complete reversal of his deeds, a recurring Indian failure to protect its own acclaimed territory from foreign invaders, owing to the weak, vacillating, compromising policy of the ruling class.

In 1965, the Haji Pir pass was re-taken by India from the enemy after a bitter, bloody battle. Since J&K acceded to India on October 26, 1947, Haji Pir, being part thereof, belonged to India. Yet, whereas India was the owner, Pakistan was the forced occupant thereof. Hence, post-1965, the ‘return’ of Haji Pir to Pakistan constituted a submission of one’s own land to the foreign invader by India’s ruling class. Would Ranjit Singh have accepted it? Anybody else, not him surely.

Again, when India, in 1999, retreated from J&K’s Kargil highland, only to find it being promptly captured by the enemy and thereafter counter-attacking to re-capture it at the expense of hundreds of soldiers’ lives, what would have Ranjit Singh said?

And what about June this year when the Indian Army lost 20 soldiers in Ladakh’s Galwan valley? What can one say about the fall of Indians deep inside their own territory before the criminal, cunning, congenitally lying invaders of the Communist Party of China’s ruling class?

Fairly and squarely, therefore, India’s successive ruling class is culpable for repeated catastrophes during the past 73 years. Regrettably, one has to confess that faulty border management, failure to preserve territorial integrity and ceaseless appeasement to foreign invaders constitute the hallmark of Indian history. Post-1947 India makes Ranjit Singh’s empire look greater and more heroic than ever before. Ranjit Singh would have enjoyed his glorious numero uno status in the eyes of the common Indians, including one hailing from the homeland of Subhas Chandra Bose, who must have taken a cue from the one and only Maharaja to fight foreign invaders.