How to read Chinese incursions

Predictable behaviour directed at proxies of their main targets 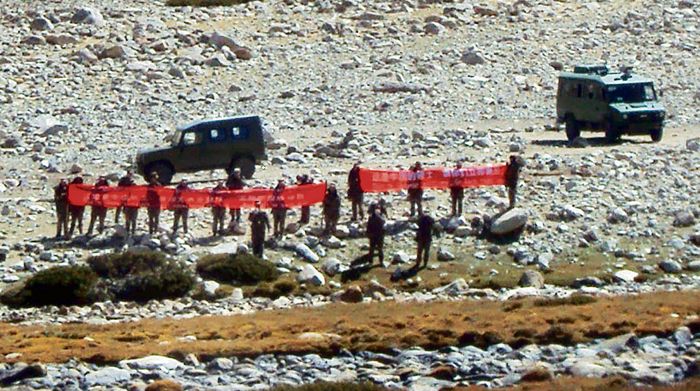 Aggression: There has been a rise in incursions, either directly or through third parties.

Various theories are being proffered on the recent spurt in Chinese incursions, either directly or through third parties like Nepal. Some say that it is to pressure us during the forthcoming WHO-sponsored investigation on the origin of the coronavirus. Others say that it is due to the inner power struggle within the Chinese leadership.

In making a judgement, we should also take into consideration the traditional Chinese way of thinking that the past is a guide for the present and the future. We should also consider the predictable Chinese behaviour while facing, in their assessment, a ‘siege situation’. Hence, I feel that Chinese Foreign Minister Wang Yi’s complaint on May 24, directed at America, has considerable significance for us. Wang Yi said that the coronavirus and global trade matters “are taking China-US relations hostage and pushing our two countries to the brink of a new cold war”. He added: “It’s time for the United States to give up its wishful thinking of changing China and stopping 1.4 billion people in their historic march toward modernisation.”

While dealing with siege situations in the past, we also witnessed Chinese anger spewing over those who are considered by them as proxies of their main targets. Thus, around 49 years ago, US Secretary of State Henry Kissinger got an earful from Chinese Prime Minister Zhou Enlai on July 10, 1971, for aligning with the Soviet Union, their main enemy at that time. Kissinger, who had come secretly with Pakistan’s help to Beijing to arrange President Richard Nixon’s visit to Beijing to start diplomatic relations, was taken aback by the Chinese fury during his talks lasting 17 hours. Zhou told him that a united US-Soviet Union-Japan axis could try to “carve up China”, but China would resist it by a protracted people’s warfare “engaging in a long-term struggle until victory.”

China also singled out India as the Soviet Union’s proxy by favouring ‘Nehru’s aggression’. He told Kissinger that China had built a road in 1951 connecting Sinkiang with Ali district in Tibet, through ‘their’ Aksai-Chin plateau. At Nikita Khrushchev’s instigation, Nehru started claiming this area from 1956 by using a British traveller’s map.

The December 1959 incident took place when India tried to capture the Chinese post in Ladakh. Khrushchev asked Tass to brand China as aggressor. In June 1959, he tore up the Soviet agreement on atomic cooperation with China. “He brought these two things — the Soviet support to India and the tearing up of the nuclear cooperation agreement with China — as gifts to Camp David.”

Kissinger made no attempt to correct Zhou who was chronologically wrong in regard to the Ladakh incident. Khrushchev visited the US for 13 days from September 15 to 27, 1959, as President Dwight Eisenhower’s guest. It also included their talks at Camp David. The Chinese aggression in Ladakh took place on October 21, 1959, in which they killed 10 CRPF men. None in India had imagined the intensity of the Chinese anger until these declassified records were published in 2002.

I was closely involved in the preparatory work on behalf of my organisation for the path-breaking visit of the then Prime Minister Rajiv Gandhi to China during December 19-23, 1988. From then onwards, the Indo-China border was quiet till 1998. On May 13, 1998, the New York Times published the secret letter from Prime Minister Vajpayee to President Bill Clinton, giving our reasons for nuclear testing. Even now, none knows who had leaked it. However, it caused great embarrassment to India with no benefits from the US.

The letter said: “We have an overt nuclear weapon state on our borders, a state which committed armed aggression against India in 1962… To add to the distrust, that country has materially helped another neighbour of ours to become a covert nuclear weapons state…”

China has another grievance against India. When Nixon visited China in 1972, their main anger was against the Soviet Union and also on India for not settling the border issues like other countries. The Chinese negotiating technique is harping upon the same points without any regard to truth or validity until the other side gets tired. Now, only India is left out as Russia finally signed the border treaty on July 21, 2008.

Their 4,300-km border had seen violent clashes since March 2, 1969, when the PLA killed 58 Soviet troops on a disputed stretch on Zhenbao Island on the eastern border. These clashes went on till March 17. Clashes broke out on the western border too on August 13, 1969 in which the Chinese lost 28 soldiers. In 2008, China claimed that Russians had conceded most of Chinese claims in the final round of talks. This involved land transfer of half of Heixiazi Island and all of Yinlong Island.

A Hudson Institute paper of August 1, 2008 said that despite persistent Russian prodding, China is unwilling to make major territorial concessions to India “so that all three countries might form an influential trilateral Moscow-Beijing-New Delhi alignment in Eurasian politics.”

The present BJP-led government has given sufficient indications since 2014 that their main foreign and security policy alignment is with the United States. We are also on board with the latest US policy of punishing China by diverting American companies to other countries, including India. Uttar Pradesh has been identified as the destination for such investments. In April, we also changed the rules to block the automatic route for approving FDI from China, which has been branded as discriminatory by them.

Thus, my 40 years’ study of the Chinese habit leads me to believe that they would hit at those who they believe are ‘accessories’ when they are unable to confront the main targets.

In recapitulating all these, I am only conveying that we would go seriously wrong in not understanding the Chinese mind. We would be equally wrong in convincing ourselves that these are temporary aberrations by their local army units or that the power struggle in China would enable us to ignore such border skirmishes.

Speaking in the Lok Sabha during Zero Hour, the MP from Punj...

UP lives in fear under BJP rule as it is a party of dictators: Bhupesh Baghel