How US got it all wrong in Afghanistan

After a defeat, a blame game is par for the course. Nevertheless, for America to wholly and solely blame Afghanistan for the fall of Kabul is misplaced. Didn’t Washington notice things going wrong from the beginning? Threats to the Afghan soldiers had never ceased, resulting in demoralisation and defeat. 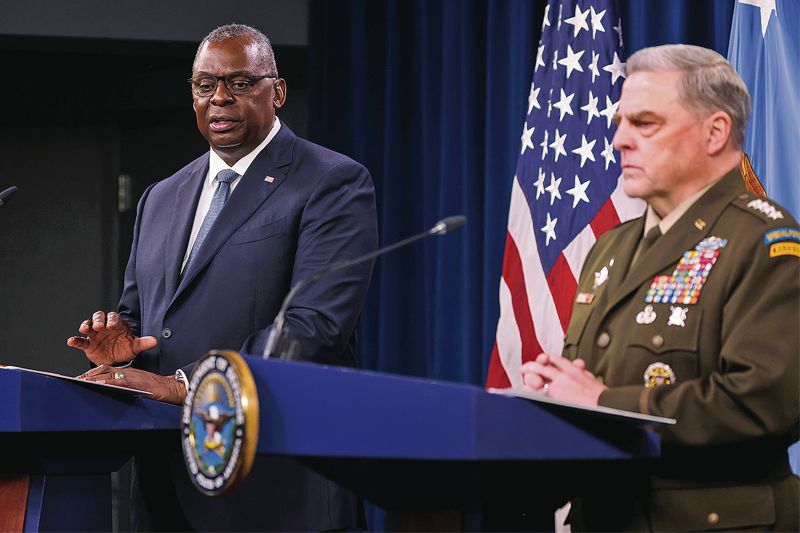 ROUTED: General Mark Milley (R) conceded that the US suffered a defeat in the Afghan war. Reuters

WHEN France sneezes, the rest of Europe catches a cold,” Austrian Chancellor Metternich said in the 19th century while devising his infamous ‘master plan’ for the ‘preservation’ of the autocratic Habsburg dominion in Europe’s heartland. What’s striking is the uncanny applicability of this failed plan to 21st-century Asia, when America stepped into Austria-like shoes to preserve the hegemony of the dollar and impose ‘democracy’ on Afghanistan through the ‘war on terror’ on which $21 trillion was blown in 20 years.

If the 19th-century scenario is visualised today, it will look thus: When Afghanistan sneezes, America-led West catches a cold. Hasn’t seniormost US General Mark Milley publicly conceded that the US suffered a crushing defeat in the 20-year-long war? “It’s clear... the war in Afghanistan didn’t end on our terms we intended, with the Taliban coming to power in Kabul. It was a strategic failure.”

The top military commander’s startling admission of the superpower’s monumental defeat at the hands of the Taliban during last month’s hearing before the US lawmakers notwithstanding, the confidence exuded by US President Biden on July 8, in retrospect, appears ironic: “The Afghan military has well-equipped troops... the likelihood of the Taliban overrunning the whole country is highly unlikely.” Even thereafter, when the Taliban were only six days away from the Kabul conquest, the Pentagon appeared all at sea on August 9. The US Defence Secretary too believed that the “Afghan army had the capability and capacity to make a big difference on the battlefield” against the Taliban.

And when Kabul fell to the Taliban, preceded by a wholesale flight of the US troops, and en mass escape, surrender and capitulation of the much-vaunted Afghan National Army (ANA), the epitaph of the greatest military humiliation of the sole superpower was written in public. Yet, a vanquished America had the gumption to put the blame on a ‘fractured’ polity and ‘cowardly’ soldiers of the ANA for the ludicrous fiasco.

How bizarre was the US logic? That the “events unfolded more quickly than we had anticipated”? Because the “Afghan political leaders gave up and fled the country”? Owing to “Afghan military which collapsed.....without trying to fight”? And that the US “gave them every chance to determine their own future” but “what couldn’t be provided to them was the will to fight for future”?

Regrettably, this language and logic weren’t befitting the status of the sole superpower, making childish accusations against its own partner, arguably one of the poorest and socially famished landlocked countries in a challenging and turbulent terrain.

After a defeat, a blame game is par for the course. Nevertheless, for America to solely blame Afghanistan for the 2021 “fall of Kabul” is misplaced. The US was “the master of what it surveyed”. Didn’t Washington notice things going wrong from the beginning? Didn’t the US behemoth notice the ground report of Jane’s World Armies-2005? “Efforts towards the creation of the ANA have been largely unimpressive, although official statements have been relentlessly upbeat”! That “recruitment and retention are potentially problematic!”

By 2008, on paper, the ANA had five corps located in Kabul, Gardez, Kandahar, Herat and Mazar-e-Sharif. But the inbuilt problems remained unresolved. Reportedly, “no independent in-country assessments of competence was made....and some foreign officers expressed doubts concerning Afghan units’ combat capabilities”. More worrisome was the Afghan official position: “The problems of desertion and difficult recruitment are recurring.” The worst, however, was the common knowledge that there remained in 2008 between 1,600 and 2,000 illegal armed groups threatening stability across Afghanistan and “army and police being specifically targeted by insurgent elements.”

These fundamental threats to the ANA soldiers never ceased. In fact, these shot up with each passing day, thereby resulting in chronic demoralisation and defeat for the ANA, with or without the presence of the US-led 48-nation International Security Assistance Force (ISAF). The US-led West simply misread the Afghan reality. Being a war-scarred society with a record number of destitute, widow, begging orphans and crippled youth, floating in every nook and corner of the land, like flies and mosquitoes, the very sight of foreign musketeers sowed the seeds of hatred and paved the way for revenge and the inevitable defeat of the ANA whose services to the West couldn’t have been taken kindly by the fiercely independent-minded Afghans.

At the end, the US was the commander in Afghanistan and the ANA operated under Washington’s diktat.

Hence, it’s unbecoming of the US President to put the blame on the Kabul garrison alone. Does the proverb ‘there’s no bad soldiers, only bad commanders’ ring familiar? Despite inherently “fractious and feuding” features, the Afghans fight foreigners for faith, family and freedom. Secondly, Afghans buy and sell weapons like Americans do automobiles. Intractable by birth and difficult to convince, the Afghans can be a collective liability without careful handling, and unfortunately, the US didn’t inspire the desired level of confidence.

Before blaming the ANA, the US should have gone through the 1979-89 Soviet-Afghan war report prepared by its erstwhile collaborator, the ISI: “The Afghan army was totally unreliable.” Pitiable working condition, violence-prone home-front where the Taliban posed a life-threat to the family members, high casualty rate at the hands of their own ‘Taliban brethren’ and a host of internal factors, made an Afghan soldier-in-uniform a bad actor in front of the Taliban fighter hailing from the same stock without a uniform. Set-piece army doctrine was inherently unsuitable to the Afghan soldier psyche. The terrain and soil too didn’t suit Moscow and Washington equipped with modern machines. The locals got the better of them.

Finally, a few words on private US war contractors who constituted a parallel war machine with thousands of personnel behind the supply line and logistics for the front. It has emerged that it was riddled with corruption from Washington to Wardak and Pentagon to Panjsher. Contractors made millions as the US spent billions. And in the end, the US left behind armaments worth billions of dollars: 33 Mi-17 helicopter; 4 C-130 transport; 23 Embraer and A-29 Super Tucano; 28 Cessna aircraft and 33 UH-60 Blackhawk helicopter. Besides, there went to the Taliban hundreds of thousands of trucks, radio sets, rifles, pistols, machine guns and artillery pieces.

So, in the end, the Taliban crushed the corruption-riddled ANA as well as American private contractors backed by a few from the State. If money only could win a war to crush a populace mired in poverty and starvation, the 20-year US-Afghan war is an anti-climax of ignorance, suspicion and defeat of the “strong” and victory for the “weak”. The war once again showed that Afghanistan is beyond comprehension for even the US-led best of the West. ‘Cold-afflicted’ Kabul fatally contaminated the cash-rich coalition of nations to call it a day.