A health crisis is waiting to explode. It will hit the vulnerable the hardest. That children and women will suffer the most is acknowledged globally. In India, the painstaking work done during the past quarter of a century to improve nutrition and literacy could be nullified. 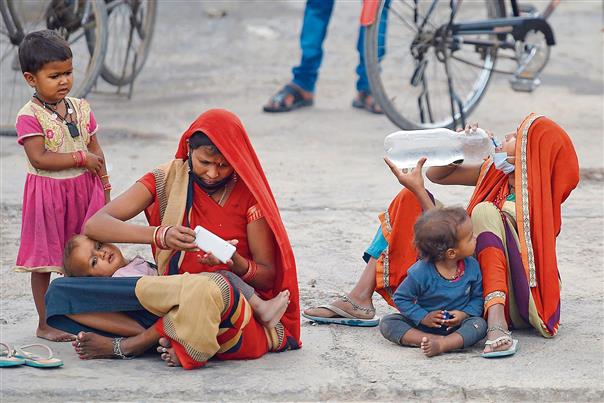 Future at stake: Dwindling food and nutritional security may result in the children being affected the most due to the pandemic.

Faced with the difficult choice between life and livelihood over Covid-19, Central and state governments decided to ‘unlock’, and this was, at one level, understandable. The Prime Minister made no secret of what he wanted — Unlock, unlock, unlock.

What, however, is not comprehensible is why they did not put in place adequate healthcare facilities that are going to be needed now. That, after all, was the purpose of the lockdowns.

Everyone knew that the numbers of the infected would spike exponentially — which is happening in Mumbai, Delhi, Chennai, Bengaluru, Ahmedabad and Kolkata. Though a 10,000-bed corona centre has been set up in Delhi now, courtesy the Radha Soami Satsang Beas, and another 1,000-bed air-conditioned facility is being readied by the DRDO, the facilities are still woefully inadequate, considering 80,000 people in Delhi have tested positive, and virtually every day brings ‘the biggest single-day spike’. Home Minister Amit Shah had to intervene to put a cap on the exorbitant rates that were being charged by private hospitals. Going by the specific experience of the sick and their families, and not by the figures being trotted out by government agencies, many have begun to feel that they are going to be left to fend for themselves.

Testing is finally being ramped up, after an earlier policy of not testing enough so as to keep the figures low. There is little information on what is happening in the rural areas after millions of migrants went back.

Of course, there are the ‘good news’ stories, like the turnaround in Dharavi, Asia’s largest slum in Mumbai, housing around one million in 2.5 square km area. What has helped is door-to-door screening and contact tracing by the Brihanmumbai Municipal Corporation, the density of population reducing with the migrants returning to their villages, and a more cohesive team in place at the senior levels of bureaucracy. But it is a new Dharavi that Mumbai should seek to build in the coming years (without the land sharks getting into the act).

But the worst is far from over, and the medical infrastructure is increasingly wilting under pressure. The rub comes with the all-round shortage of medical staff. The doctors and nurses are tired, infected or afraid.

Could the government consider mobilising the community of medical students to help out with the Covid-19 crisis? They are young, more likely to survive infection, and reasonably equipped to deal with the moderate cases, like giving oxygen, taking blood pressure, administering medicines, and helping senior doctors who can take care of the serious patients.

In fact, what could also be considered is the creation of a youth volunteer corps of health workers, who, even with a couple of weeks of training, may be able to pitch in with the basic health tasks in a city or a district hospital or in a rural PHC-like taking temperature, keeping a chart, making sure patients get what they need and recover in a cheerful and welcoming surrounding. All this does not require huge expertise, but motivation to connect with — and serve — the community. If the scheme is designed properly, it could, in time, come to undergird our long-neglected public health system.

Raj Narain, as Health Minister in 1977, had envisaged the creation of ‘barefoot doctors’, or a cadre of community of health workers who would make basic medical aid available to every citizen.

It would also be instructive to look at the experience of Poshan Preraks in 0the last three years, of graduates of IIM, IIT, BITS Pilani and other organisations, giving a couple of years working with the District Magistrate, as a bridge between the government and the oft-ignored reality on the ground.

This is a moment to look ahead and put in place what has not been done so far. Medical journal Lancet has predicted additional deaths of 1.2 million children in the coming six months because of the pandemic and lockdowns. In India, according to the UNICEF, the figure could be 3 lakh children, either because they could not be immunised or did not get the take home rations or the mid-day meals at anganwadi centres in the past three months.

The loss of livelihoods will lead to girls being pulled out of school and married at an early age by parents, as suggested by recent reports. In Telangana alone, 204 child marriages were reported during the lockdown. Thanks to dwindling food and nutritional security, when children fall ill, which many do in the rainy season, afflicted by acute respiratory infections or diarrhoea, it is the stunted, wasted, and the anaemic among them, who may not make it.

This, then, is also a health crisis waiting to explode. It will hit the vulnerable the hardest. That children and women will suffer the most is acknowledged globally. In India, all the painstaking work done during the past quarter of a century — improving levels of malnutrition, reducing infant and maternal mortality rates, bringing down the dropout rate of girls or increasing their age of marriage — could be wiped out.

Over the years, the NGOs have been crying hoarse that public health spending has to go up from the paltry figure we have of 1.28% (of the GDP). India ranks 170th out of 188 countries.

The pandemic is forcing societies-and governments to rethink their priorities. Racism in the United States is not

new but suddenly ‘Black lives matter’ has become a signature tune of the pandemic in America. The British are looking at their National Health Service with a new appreciation— a model we in India should look at more closely. We cannot allow our future to be compromised. For, at the end of the day, a nation is as developed as the health of its children — and its citizens.

Among the themes that are going to dominate national discourse in the months to come, will be hunger and health, and they will also determine the trajectory of our politics.

‘Public health matters’ — that has to be India’s battle cry now. Not a cutback in funds, which governments may be tempted to go in for as the easier way out for managing its finances.