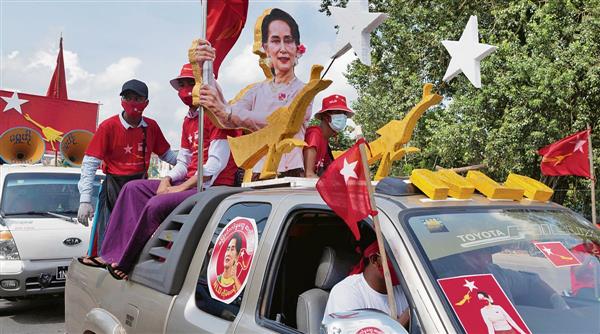 Issue at hand: Myanmar goes to the polls on November 8. The Rohingya problem must be addressed. India can help by involving its Quad partners.

The recent visit to Myanmar, undertaken jointly by Army Chief Gen Manoj Mukund Naravane, and Foreign Secretary Harsh Vardhan Shringla, was a manifestation of the strategic importance India accords to ties with its northeastern neighbour, with whom it shares a 1,643-km border. The border extends from China to Bangladesh. Despite good political ties, there was little economic cooperation between India and Myanmar till the 1990s, primarily because of Myanmar’s isolationist economic policies. Security cooperation for dealing with cross-border armed insurgencies, involving armed separatist groups, like ULFA in Assam, the NSCN (IM) in Nagaland, and their counterparts in Myanmar, like the Kachin Independence Organisation (KIO), was minimal or non-existent.

India and Myanmar got together in the 1990s for negotiations that resulted in agreements to deal with cross-border insurgencies and drug smuggling. These agreements have been effective in containing groups like the NSCN (IM) and ULFA, and their Myanmar counterparts, like the Arakan Army (AA), based in Myanmar’s Kachin province. Their links with Myanmar separatist groups also helped Indian groups to enter and operate from China’s bordering Yunnan province, while also securing safe haven and military support from Chinese agencies.

Facing sanctions since the 1990s, cash-strapped Myanmar became excessively dependent on China. But it expanded ties with India and East Asian countries like Thailand, Singapore, Japan and South Korea. It has dealt firmly with Indian separatist groups seeking to move across its borders to China. Given their disregard for the strategic importance of Myanmar, the US and its allies imposed sanctions on Myanmar, because of its alleged human rights violations against the Rohingya. However, the UN Sanctions Resolutions they proposed were vetoed by China. The US and its allies have also not joined Myanmar’s immediate neighbours and Japan to work out plans for financing the return and rehabilitation of the Rohingya. The main beneficiary of such policies of the US and the EU is China, as Myanmar now depends on its support to veto western resolutions in the UN.

Taking advantage of Myanmar’s dependence on it, China is developing a port at Kyaukphyu in the Bay of Bengal and linking the port by rail and road to Yunnan. Chinese companies are moving into areas like minerals and precious stones. Moreover, China has close links with a large number of Myanmar’s 26-armed ethnic groups, including the powerful 12,000-15,000 strong Kachin Independence Army, which operates along Myanmar’s borders with both India and China, and the 20,000-25,000 strong United State Army along the China-Myanmar border. These groups are armed and used as a lever by China to interfere in and influence Myanmar’s internal affairs.

China even has an ambassador to liaise with armed groups. It influences these armed groups, which are participating in a conference organised by the Myanmar government for drafting a new constitution. China is determined to dominate Myanmar’s internal politics. Beijing also uses such leverage and its political support to obtain contracts for infrastructure and other projects involving construction of ports, dams, roads, bridges and for mining of precious stones, minerals and metals across Myanmar.

India’s Border Roads Organisation did a splendid job in road building, linking Moreh in Manipur with Kalemyo in Myanmar, thereby opening the door for border trade between our Northeast and Mandalay. But the progress on the Kaladan corridor has been delayed. This crucial project links Mizoram and India’s other Northeastern states to the Sittwe Port in Myanmar, located in the Bay of Bengal, at a short distance from Kolkata. The completion of this corridor has been delayed by attacks on workers by the AA, an insurgent group with links to China. But close cooperation between the Indian and Myanmar armies has led to the destruction of camps of the AA along the India-Myanmar border.

India’s economic cooperation in Myanmar has been disappointing, with two-way trade reaching barely $1.52 billion, with our exports amounting to $973 million last year. While the ONGC has done well in offshore oil exploration, our private sector has not done well in investments in Myanmar, in comparison with the performance of its counterparts in neighbouring ASEAN countries, China and Japan. India has, however, done well by establishing training institutions in IT and agricultural research in Myanmar. Military cooperation is set to expand, with the supply of a Kilo Class Submarine and torpedoes, with discussions reportedly underway for the supply of 105 mm artillery guns, radars and sonars.

The visit by the Army Chief and Foreign Secretary enabled a comprehensive exchange of views on the entire range of relations. The Indian delegation exchanged views with two of the most powerful leaders in Myanmar, State Counsellor Aung San Suu Kyi, who is engrossed in campaigning for the parliamentary elections on November 8, and the Chief of Defence Services, Senior Gen Min Aung Hlaing. Recent comments by General Hlaing suggest that the army will support the Union Solidarity and Development Party led by former army officers and not Suu Kyi’s National League for Democracy. Differences between the hugely popular Suu Kyi and the Myanmar army have been continuing, an inevitable feature of Myanmar’s present-day politics and national life. But the continuing Rohingya problem has to be addressed for regional peace and security across the Bay of Bengal. This will require international cooperation, in which India should actively involve its Quad partners. It is not reasonable to expect Bangladesh to bear the entire burden of hosting 9,00,000 Rohingya refugees. The continuing tensions between Bangladesh and Myanmar on the issue can only be addressed by an inclusive international effort.