The public discourse during the civic elections was about aspects of Hyderabadi culture in the context of its feudal past, ignoring the present realities of the pandemic during which the city is playing a critical role as the global hub of science and medicine. This is what makes Hyderabad an enigma to the outsiders. Is it a city steeped in old ways of life, the Nawabi culture, or a modern metropolis buzzing with new ideas? 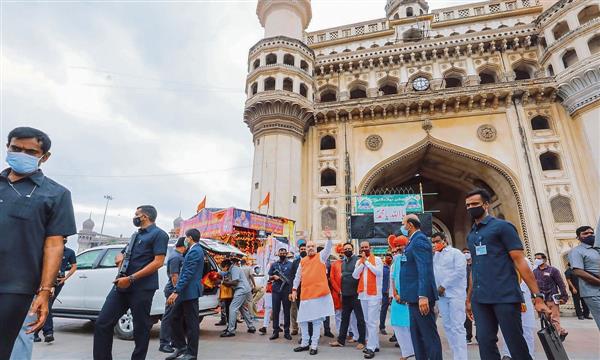 Values under threat: The BJP has attacked the ‘Nawabi-Nizami’ culture of Hyderabad. PTI

It is usually the bread-and-butter issues of bijli, sadak and paani that dominate local body elections. But the Greater Hyderabad Municipal Corporation polls which concluded last week proved to be an exception. It was history, culture and geography that figured prominently in the campaign. The tone was set by the big guns of the Bharatiya Janata Party from Delhi and Uttar Pradesh. They talked of ending the so-called ‘Nizami-Nawabi’ culture of Hyderabad and also referred to a geographic area — the old city — in deriding terms. For ardent Hyderabadis, it amounted to an assault on Hyderabadi culture which is celebrated for being tolerant, peace-loving and steeped in a rich food tradition. As the results have shown, the campaign rhetoric seems to have paid rich dividends. This is despite the fact that while his party leaders were targeting Hyderabadi culture in one part of the city, the Prime Minister was busy reviewing the progress of Covid-19 vaccines with vaccine companies in another.

The public discourse during the election was about aspects of Hyderabadi culture in the context of its feudal past that ended in 1948, ignoring the present realities of the pandemic during which the city is playing a critical role as the global hub of science and medicine. This is what makes Hyderabad an enigma to outsiders. Is it a city steeped in old ways of life, the Nawabi culture, or is it a modern metropolis buzzing with new ideas? The truth is that the culture and modernity of Hyderabad are intertwined.

The ‘oriental splendour’ that Hyderabad was, in the late 19th and early 20th century, now only belongs to history books and museums. Mir Osman Ali Khan (the seventh and last Nizam), once named the richest man on the planet, died half a century ago. Descendants of Nawabs and Rajahs — who represented the nobility in princely Hyderabad — are not a force in Hyderabadi society. Barring a few notable exceptions, most of the deodhis, havelis and palaces of the Nizam era have given way to real estate dreams of their owners. The city does not have any statue of the Nizams or main thoroughfares named after any of them.

Yet the Nizam, or the culture he epitomised, became a central figure in the local body elections in 2020. This is because the present day Hyderabad is intrinsically linked to its past — not through built heritage or road names, but through the uniqueness of culture dating back to the very founding by the Qutub Shahis over four centuries ago.

The basic tenets of Hyderabadi culture — multilingualism, multiculturalism, religious tolerance and peaceful co-existence, respect for knowledge, typical food traditions — have not eroded since then. The city has a sizeable number of people who speak each of the four principal languages of the princely Hyderabad — Telugu, Urdu, Kannada and Marathi — in addition to Hindi, Odia, Tamil, Gujarati, Marwari and so on.

The eclectic mix of the modern and traditional is not new to Hyderabad. Western science was introduced in the city a decade ahead of the founding of universities in the British presidencies. The Hyderabad Medical School was established in 1846, when the city had barbers conducting ‘surgeries’ and blood sucking by leeches was the main line of treatment. The Darul Uloom theological college of learning, established by Turab Ali Khan (Salar Jang I) in 1854, not only taught Persian and Arabic, but also English along with Telugu and Marathi. The ideas of setting up an Islamic University in Hyderabad by visitors like Wilfrid Scawen Blunt and Sheikh Jamaluddin Afghani had few takers. Instead, Salar Jung invited Dr Aghorenath Chattopadhyay, chemist and educationist, to become the principal of the English-medium Hyderabad School which later morphed into the famous Nizam College.

He also inducted Syed Husain Bilgrami from Lucknow to shape public instruction in the state. Chattopadhyay’s children — Sarojini and Virendranath — were among those granted government scholarships to pursue higher studies in England. Sarojini later married Dr MG Naidu, a product of the Hyderabad Medical School who was also sent to England for advanced degrees in medicine. The medical school earned global recognition for clinical research, resulting in the landmark Hyderabad Chloroform Commissions. In contrast, state support to Unani and Ayurvedic education came many decades later.

The investment in building knowledge institutions and modernisation continued in the early twentieth century. Mir Mahbub Ali Khan, the sixth Nizam, invited M Visvesvaraya — then in service of the British — to plan rebuilding the city after the devastating Musi floods of 1908. The seventh Nizam carried forward the task, established the City Improvement Board and funded construction of iconic buildings on the riverfront. Bureaucrats and intellectuals from British India like Akbar Hydari and Syed Ross Masood helped conceive the Osmania University — the first Indian university to teach in a vernacular language. Japan, where all scientific and technical education was in the Japanese language, served as a model. The Nizam being an ally of the British, Hyderabad participated in both the world wars. The war effort triggered industrial production as well and research, paving the way for Central laboratories for scientific and industrial research, a starting point for research attracting talented scientists and nurturing future leaders of Indian science — Dr S Husain Zaheer, Dr GS Sidhu, Dr G Thyagarajan and Dr PM Bhargava.

It is often argued that modernisation projects during the Asaf Jahi era were a result of direct and indirect British influence. And some of them, like the war effort during the time of the last Nizam, were implemented for strategic gains. The Nizam, in the 1940s, had also developed the ambition of becoming a king and making Hyderabad an independent state. He was a feudal autocrat, muzzling dissent and cries for participative government. But all this does not diminish core values of the Hyderabadi culture, of being composite and inclusive, which has made the city a melting pot of new ideas and development. The need is to preserve, not eradicate, this culture.