I grieve for my country as never before

People I have known for ages and counted as my friends are vertically divided. Our only hope of success is that our two great leaders suddenly begin to realise that India with its diversity will be destroyed if they insist on taking the suicidal path they have chosen 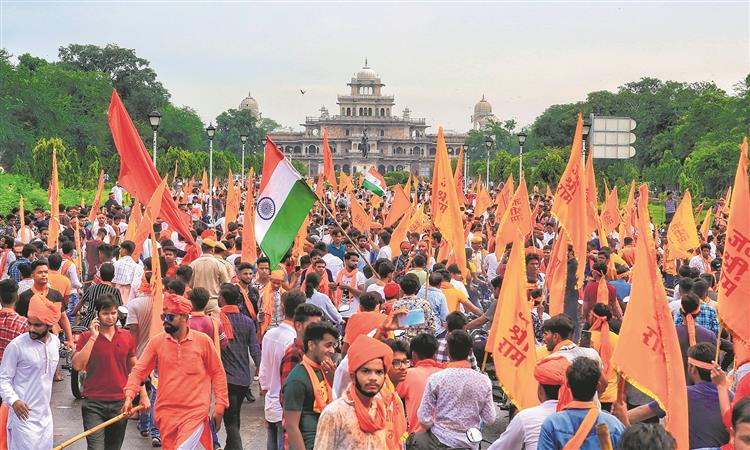 Today, I grieve for my country as never before! The prospect of a resurgent India, respected in the comity of nations, is slowly fading in the sudden flurry of Hindutva forces yearning for a Hindu Rashtra!

I remember my first journey beyond Indian shores. It was in the January of 1980 and it was to Japan. On a Sunday morning, I went to church in Tokyo, accompanied by two other guests of the Japanese government. An Indian couple passed us on the road. I exchanged greetings with my countrymen — just a nod and a smile — and this attracted the attention and also the admiration of my companions.

‘Do you know them?’ they asked and on learning that Indians abroad are happy to acknowledge their compatriots, even if they belong to towns 500 km apart, even if they worship different gods and speak in different tongues, it amazed them that Indians could pick out other Indians from the crowd and derive comradeship.

This feeling of belonging to one country, of being one people, is what the Hindutva forces are going to destroy in their mad scramble to reach their goal of Hindu Rashtra. People I have known for ages and counted as my friends are vertically divided today. The division is largely on communal lines, though many of my Hindu friends grieve along with me and my Muslim brethren. What troubles me though is that an equal number of my Hindu friends have suddenly, overnight literally, decided that the ‘other’ is a dangerous animal, to be shunned. That thought, I now realise, must have been latent. It had not been revealed till Mr Modi and Mr Shah nudged them to prioritise their Hindu identity!

And that is when I remembered my meeting with KS Sudarshan, the Sarsanghachalak of the RSS, in Mumbai soon after I returned from Romania in 1994. An IPS colleague of mine was the messenger who brought the invitation.

Sudarshan said he had heard about my fight against the terrorists and terrorism in Punjab but he wanted to know from me why 84 per cent of the people were being treated as second-class citizens in their own country! I was dumbstruck by his statement, so categorically expressed! And I said so. Even I, a Christian, one of a miniscule 2.4 per cent of the vast population, did not think or feel that any segment was being disrespected. I, for one, was never given cause to complain!

But Sudarshan was not appeased. He was absolutely sure that the Hindus, 84 per cent (counting the Sikhs, I suppose), were being relegated to second-class status. I could never figure out how he and the RSS came to such a conclusion but I do understand today that the politics of Mr Modi and Mr Shah is travelling on a trajectory that will supposedly correct that “grievous wrong”.

The downgrading of a Muslim majority state and the exclusion of just one religion’s followers from the benefits promised by the CAA are the first salvos fired by the disgruntled among the 84 per cent to put a ‘pampered’ minority in its place.

Counted in the 84 per cent, thankfully, are elements who do not think they were ever deprived. Besides ‘urban Naxals’, Left-wing ‘tukde-tukde’ gangsters, and sundry ‘anti-nationals’ who disagree with Mr Modi and Mr Shah on the ‘hate’ politics they encourage, there is also this irritant who is known as Kejriwal, the man with the broom! This ‘upstart’ had done work that has been appreciated by the poor, in particular, in Delhi and was the runaway winner of the February 8 elections in Delhi.

A victory of the AAP was a slap on the face of the true representatives of the 84 per cent though the BJP decided to induct ‘galis’ and ‘golis’ into the battle to tilt the scales. The result of this strategy to influence the populace on sectarian lines failed.

To march to the desired goal of a Hindu Rashtra, which will compete with Pakistan in the number of religious extremists dictating terms to their armies and their governments, Mr Modi and Mr Shah conjured a well-planned strategy of winning as many elections as they possibly could. Unfortunately, for them, they have lost a spate of state elections. The Delhi election was too prestigious to lose and hence their fall-back on ‘galis’ and ‘golis’, which vitiated the political atmosphere to such an extent that I dread the long-term consequences of this misstep. The riots in Delhi were the natural consequence of all the hate that was spread by the BJP’s motor mouths.

Mr Modi remarked in Parliament that the policy of the Opposition to support the anti-CAA protesters is going to divide this country irreparably. I was surprised to hear this because I always thought that the visceral hatred of the ‘other’ was what was actually splitting the country.

For a person who has strived for communal harmony in my city of Mumbai by bringing slum-dwellers of all faiths on a common platform of the Mohalla Committees Movement, the prospect of facing a powerful political force that walks in the opposite direction is daunting. Our only hope of success is that our two great leaders suddenly begin to realise that India with its diversity will be destroyed if they insist on taking the suicidal path they have chosen.

Till that wisdom dawns on them, I will continue to cry, like Alan Paton did for South Africa when it was steeped in ‘Apartheid’.