Internal criticism and pressures have weakened him & his government 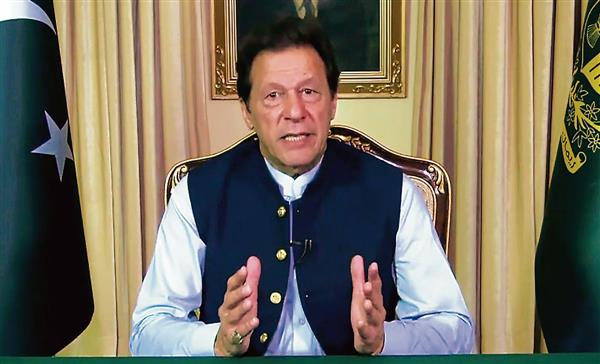 ‘Taliban Khan’: Imran has been exposed as a hardcore, radical Islamist.

Imran Khan’s exaggerated belief in the importance of Pakistan’s role in the Islamic world and its relations with world powers like the US and Russia have led his debt-ridden country into trouble. He is widely described as his country’s ‘selected’ and not ‘elected’ PM. It is no secret that it was the Pakistan army’s manoeuvrings that led to his assuming office. His revulsion for India and Indians has always run deep. His regard for radical Islamic groups remains unchanged, earning him the name of ‘Taliban Khan’. He was tutored in politics by a former ISI chief, Lt Gen Hamid Gul, who fostered several Afghan Mujahideen groups, apart from financing, arming and training terrorist groups in J&K and Punjab.

Imran, more than any other Pakistan leader, except perhaps Gen Zia-ul-Haq, is a radical Islamist. He recently described Osama bin Laden as a ‘martyr’. The American Special Envoy for Afghanistan, Zalmay Khalilzad, deals primarily with the army chief, Gen Qamar Jawed Bajwa. Imran Khan is merely a bystander. As a hardcore Islamist, he believed that he could turn the Islamic world led by Saudi Arabia, against India. He forgot that it was his rival Nawaz Sharif, who enjoyed the highest respect of the Saudi royalty. Left to himself, General Musharraf would have hanged Sharif at the earliest opportunity. He, however, exiled him to Saudi Arabia. He was all too aware that offending the Saudis would open the door to economic bankruptcy for Pakistan.

Disregarding such personal equations, Imran went on the warpath against Saudi Arabia for not backing him adequately against India on J&K. His motormouth foreign minister, Shah Mehmood Qureshi, warned that Pakistan would bypass Saudi Arabia and convene a meeting of 57 members of the OIC countries if Saudi Arabia sought to prevent India from being condemned. Imran also offended the Saudis by backing a proposed partnership of Malaysia, Turkey and other Islamic countries — a move which would have undermined Saudi Arabia’s role in the Islamic world. The Saudi reaction was immediate. Pakistan’s de facto ruler, General Bajwa, was cold-shouldered and denied a meeting with Crown Prince Salman when he visited Saudi Arabia. Pakistan was told to repay its dues to Saudi Arabia immediately. China had to yet again bail out Pakistan to repay its debts.

Pakistan, thereafter, landed itself in deeper trouble with influential Arab countries, like the Gulf monarchies, Egypt and Jordan. Imran echoed their rivals, Turkey and Iran, with his virulent condemnation of Israel, immediately after the UAE and Bahrain recognised and established diplomatic relations with Israel. This amounted to condemnation of actions taken by the UAE and Bahrain, evidently with Saudi support. India, on the other hand, has avoided getting drawn into rivalries between Arab and Islamic countries, while maintaining good relations with Israel. Trade and investment cooperation between India and the Gulf states, notably Saudi Arabia, is set to grow substantially, with major investments proposed by these countries in the energy sector. Moreover, the Gulf states depend on the Bahrain-based US Fifth Fleet to guarantee their maritime security. There are now close links between the US fleet and India’s Western Fleet.

While Imran’s bungling in foreign policy was inevitable, he is now also facing internal criticism and pressures that have weakened him and his government. Pakistan’s economic woes, particularly its growing foreign debt and its low rates of savings and growth, continue. Imran, however, remains vicious and vindictive, trying to get political opponents harassed and jailed by the state machinery. Sharif has lashed out at Imran and the army, from his home in London. The army is itself under pressure, because of highly damaging charges of corruption against one of its most prominent officers, Lt Gen Asim Saleem Bajwa, who heads the multi-billion-dollar CPEC. Bajwa has also been appointed media adviser to the PM, who has vigorously defended him.

Sharif was unsparing in his criticism of Imran. He also held the army directly responsible for the country’s woes. He said after having been a ‘state within a state’, the army was now a ‘state above a state’. This, he added, is ‘the root cause of all our problems’. Sharif added that while political leaders are constantly victimised in the name of ‘accountability’, army dictators got away, despite subverting the constitution and committing any number of crimes. Pakistan’s army has never been lashed out at in such a manner. Never before has the army resorted to such a crude and unconstitutional exercise of power, as in recent years.

Imran’s subservience to the army was recently exposed when reports emerged about the financial assets of Asim Bajwa. A devastating report on Bajwa’s family (wife, two younger brothers and two sons), based on documents, including from the Pakistan Securities and Exchange Commission, was published recently. It notes that Bajwa family owns a business empire comprising 99 companies in four countries, named the ‘BAJCO Group’, valued at $52.7 million. Imran promptly declared the charges as baseless.

Asim Bajwa’s quest for wealth evidently commenced after he joined Musharraf’s staff in 2002. Musharraf himself owns properties in London and Dubai. His successor, Ashfaq Kayani, mysteriously took off, soon after his retirement, to spend a few years in Australia. Kayani’s successor, Raheel Sharif, lives cosily in Saudi Arabia. All these worthies, while still in service, got themselves allotted plush ‘residential plots’ in elite localities in Karachi, Lahore and elsewhere, at little or no cost! Pakistan’s Generals know very well how to drive fast on the road to living luxuriously.

Imran has, meanwhile, excelled himself with his crude and repeated condemnation of India in the UN General Assembly. PM Modi ignored his raving and ranting as being unworthy of a high-level response from India.