Paswan and Mayawati did not take Dalit politics to another level because in both cases, the distinction between the political and the personal was blurred. Their latter-day agenda was about nurturing an heir apparent. Dalit politics in the heartland is about winning as many seats that can give the leader the latitude to barter away his or her support in lieu of a ‘favourable’ contract. 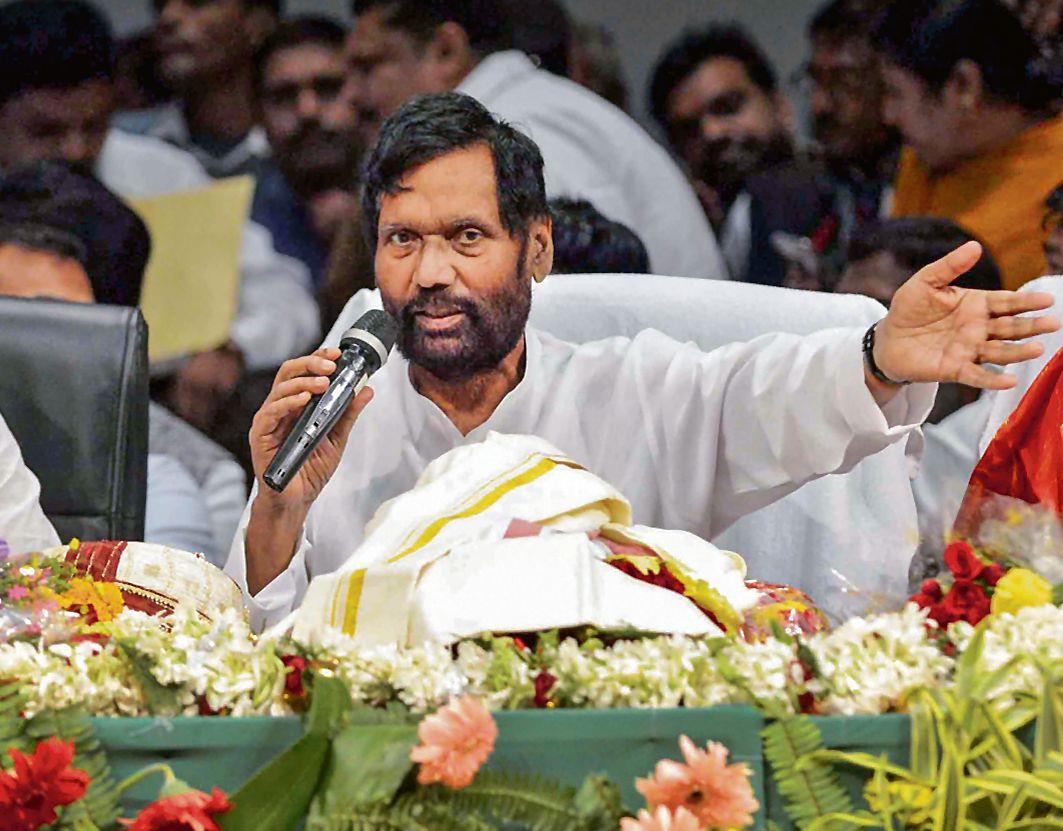 Irony: Paswan walked out of Vajpayee-led NDA in protest against the 2002 Gujarat violence, but walked in when the alliance was headed by Modi.

The demise of Ram Vilas Paswan prompted a reflection on Dalit politics and the vicissitudes it was subject to not just in Bihar, his home state, but in the heartland. The evolution of a political consciousness among the Dalits of north India was gradual. It was inspired by the ideals of Dr BR Ambedkar, the symbolism embodied in mythological and real-life icons such as Sant Ravidas, Shambuka, Eklavya, Raja Suheldev, Uda Devi and Jhalkaribai who created an alternative pantheon of deities, and the philosophy, pragmatism and advocacy of Kanshi Ram, who founded the Bahujan Samaj Party (BSP). Unlike Maharashtra and Kerala, where Dalit politics was inextricably conjoined with reformist zeal and a push to reorder the varna system, in Uttar Pradesh and Bihar, power politics was at the heart of it.

Power politics is a potent instrument for reparation, an agency to raise and set right the legitimate interests and privileges of those castes and sub-castes that lay at the bottom of the social heap for centuries. However, wielded by overly ambitious leaders and influence-peddlers, it becomes a travesty of its original idealistic form. Unfortunately, Dalit politics in Maharashtra, the fount, ran the course from idealism to cynicism while it is a matter of debate if the variants in north India ever had an element of high-mindedness. When Ramdas Athavale, presently a Central minister helming a splinter group of the Republican Party of India, teamed up with the BJP-Shiv Sena alliance before the local polls of 2012 in Maharashtra, it took a slogan, ‘Bhim Shakti-Shiv Shakti’, to flash the union of antagonistic ideologies and irreconcilable social interests. Namdeo Dhasal, an influential Dalit poet and activist, endorsed the alliance on the ground that it would help the Scheduled Castes unshackle themselves from the Congress and ‘build a new Maharashtra’. It seemed as though any rationale was worthy to validate expediency. Harish S Wankhede, who teaches Political Studies at JNU, summed up the fallout of the alliance as a loss of the ‘political ideology of the oppressed’. In an article in the Economic and Political Weekly, Wankhede wrote, “The recourse to ‘alliance politics’ overtly represents the myopic view of the Dalit leadership which is strategising mainly to remain viable in the political scenario of Maharashtra without bothering about the principal ideals of the Dalit movement.”

Transpose Wankhede’s prognosis of the Maharashtra scenario to Bihar and UP, and you might find clues to read the state of Dalit politics in the heartland. It was not as though the Dalit leaders were oblivious to the condition of the castes they represented in electoral politics. They did not come out of a rarefied environment. They suffered the ravages inflicted by an upper caste-dominated establishment and fought hard to get themselves education and work.

It was not as though they did not flag pressing issues and leverage their clout in Parliament, the assemblies and local councils to seek statutory solutions and amend the social imbalances. But there was just this much they could do, whether it was Paswan, Kanshi Ram and his protégé, Mayawati. Paswan was part of the socialist formations in one avatar or another, until he launched his Lok Janshakti Party (LJP) in 2000. Mayawati inherited the BSP legacy from Ram but twisted its original character somewhat unrecognisably although she professedly remained true to Ram’s founding principles. The pursuit of electoral politics first entailed seeking a place in the shifting sands of heartland caste equations and then doing business with the ‘mainstream’ parties to claim a share of the power pie. North Indian social and economic dynamics as well as personal angularities denied Dalit leaders the opportunity to emerge as leaders in their own right with Mayawati being an exception for a while in UP.

Their means were limited, they had to sort out their priorities that invariably demanded ‘compromises’. Striking bargains, clinching negotiations to extract ‘good’ deals and forsaking ‘principles’ (or what existed of the principles) laid the Dalit leaders bare to the charge of being ‘opportunistic’ and ‘self-centred’. What is ‘Chanakya niti’ to a savarna politician becomes ‘opportunism’ for his Dalit counterpart. It’s about viewing politics through historically tinged prisms that dignifies the same strategy in one case and disparages it in another.

Paswan belonged to the upper layer of the Dalits, the Dusadh or Paswan sub-caste. Although he said he was influenced by Maharashtra’s Dalit Panthers movement, he was cramped by circumstances in Bihar where a Dalit politician had to get a ‘good deal’ from the mainstream parties to survive well: either in office or the Opposition, draw out seats in a pre-poll alliance, haggle for space in the government and barter away his caste votes to seal a ‘good deal’.

Paswan did well for himself and his family, given the limitations. Before the ’80s and the dawning of the era of social justice and empowerment of the marginalised castes, the Naxalite movement was a vehicle of Dalit assertion in Bihar. It drew a large number of landless peasants who, in their struggle for land rights, were attacked by the landed castes but felt confident enough to answer in kind with the backing of the Naxalites. The emergence and rise of Lalu Prasad transformed the idiom and nature of Dalit politics: from land, the concerns shifted to reservation and social justice. Paswan espoused the Mandal Commission’s recommendations for statutory reservation to the Other Backward Classes (OBC) with passion, knowing the inherent contradictions on the ground between the OBC and the Dalits. His last significant intervention was to pressure the Narendra Modi government to restore the original provisions of the SC/ST Act after the Court sought to dilute it, ruling that no immediate arrests could be done if the Act was violated. The court’s ruling made Dalits more vulnerable because despite the Act’s stringent provisions, it is rarely implemented in letter and spirit except in UP when Mayawati was the CM between 2007 and 2012.

If Mayawati winded down a successful career with a preoccupation with her financial tangles, the departure of powerful loyalists and the fear of being snagged by enforcement authorities, Paswan’s innings were marked by an ability to switch sides without blinking, getting a ministry and seamlessly initiating his son, Chirag, into politics. Paswan and Mayawati did not take Dalit politics to another level because in both cases, the distinction between the political and the personal was blurred. In the old feudal style, their latter-day agenda was about nurturing an heir apparent. Chirag in Paswan’s case and Akash Anand, Mayawati’s nephew, who’s being groomed to ‘inherit’ the BSP. Mayawati did not visit Hathras, where a young Passi woman was raped and murdered. Her family is being hounded by the UP establishment, but there’s not a squeak from the BSP president.

Dalit politics in the heartland is about winning as many seats that can give the leader the latitude to barter away his or her support in lieu of a ‘favourable’ contract. That’s what Chirag aims to do in the Bihar elections. The senior Paswan walked out of the Atal Bihari Vajpayee-led NDA in protest against the 2002 Gujarat violence. In 2014, he happily walked in when the same coalition was headed by Modi. Ideology, anyone?