In Pak, whither minorities? 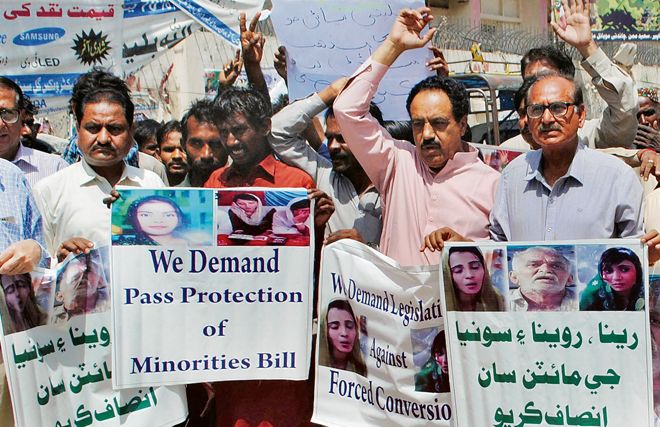 Actuality: Discrimination against the minorities is entrenched in Pakistan’s laws.

During his address to the UNGA in 2019, Imran Khan waxed eloquent about Islamophobia in the West. He subsequently took pot shots at the alleged ill treatment of Muslims in India. He would instead do well to look at the horrendous institutional persecution of minorities in Pakistan itself.

The key issues facing the minorities in Pakistan are that compared to their population, they are disproportionately targeted with false accusations under the blasphemy laws; their homes and places of worship are frequently attacked by mobs and nobody is brought to justice; their women and especially underage girls are forcibly converted and married off to Muslim men. During the coronavirus pandemic, cases have surfaced when minorities were deprived of food and forced to convert to Islam to receive sustenance. Even the United States Commission for International Religious Freedom (USCIRF) report of April 28 this year highlighted the denial of coronavirus-related food aid to Hindus and Christians.

Pakistan invariably takes the plea that its constitution guarantees rights and the religious freedom of minorities and that Islam mandates the protection of minorities. What it does not talk about is that the constitution is implemented more in the breach and Pakistan is nowhere even remotely close to the prescriptions of Islam on minorities. A new tack under Imran Khan is to focus on issues like the inauguration of the Kartarpur Corridor or renovation of a few Hindu temples. These are then projected to claim that the minorities are well looked after in Pakistan and are turned into tourist destinations for foreign dignitaries, like the UN Secretary General to convey Pakistan’s ‘soft’ image.

The actuality of the treatment of minorities goes way beyond the renovation of buildings. The reality is that Pakistan has been long identified by human rights organisations as one of the worst countries for religious minorities. As the Dawn put it editorially on May 9, “Pakistan’s minorities often live under a cloud of fear and insecurity… Instead of receiving protection, vulnerable groups are ignored or thrown under the bus, over and over again, as they navigate layers of systemic discrimination and deeply rooted cultural biases…”

The USCIRF annual report had noted continued disregard for the religious freedom of its minorities and continued to designate it as a Country of Particular Concern (CPC), a designation continuing since 2002.

It is undeniable that discrimination against the minorities is entrenched in Pakistan’s laws. The radicalised clergy bolster it almost daily and school textbooks reinforce it by demonising other faiths, and showing the minorities as being inferior. Such intolerance and hatred against the religious minorities has been prevalent since 1947. It has only got worse over the decades. People forget but Jinnah’s celebrated August 11, 1947 speech was censored immediately after his death and kept under wraps.

Faced with this barrage of criticism, Pakistan is trying to improve its international image through symbolic gestures and a public relations blitz without tackling the root of the problem.

One such effort has been the reconstitution of the National Commission for Minorities (NCM) on May 5 soon after the release of the USCIRF report. The Supreme Court had ordered the formation of an empowered commission in June 2014 following twin bombings at the Peshawar All-Saints Church in 2013. The two main elements of the order were that it should be set up through parliamentary legislation and its function should, inter alia, be to monitor the practical realisation of safeguards under the constitution and law.

The NCM has been severely criticised on two counts: the manner in which it was set up —through a cabinet decision and not by a parliamentary enactment — and its ineffectiveness in addressing the problems faced by the minorities — since it lacked independence, being placed under the Ministry for Religious Affairs (MRA). In its submission to the SC on February 19, the MRA noted that the NCM would be constituted through an Act of Parliament. Despite this, it was created by a cabinet decision and not parliament.

Qibla Ayaz, chairman of the Council of Islamic Ideology (CII), an ex-officio member of the commission, revealed the hoax when he was quoted in the media stating: “The commission is not for the welfare of minorities and has no veto over government decisions. It is merely a forum to promote interfaith harmony and healthy discussion.” He added that there was a lot of international pressure to safeguard minority rights and the commission was an official effort to control such damage and show the world that Pakistan was making progress in such matters!

The government also tied itself up in knots over the Ahmadis. In the first cabinet note, there was a seat for an Ahmadi on the commission. This was dropped in the second note. No explanation was given. An Ahmadi in Pakistan has been constitutionally mandated a non-Muslim and so should have found a place among the minorities. The Ahmadis could well have declined since they consider themselves as Muslims. Pakistanis would do well to recall that when Jinnah was asked about the Ahmadis, he replied, “Who am I to declare a person non-Muslim who calls himself a Muslim?”

Despite the commission being a sham, Pakistan feels it has achieved its objective. The USCIRF has described the creation of the commission as “an important step in Pakistan's continuing journey towards the protection of religious freedom.” Pakistan, undoubtedly, has mastered the art of fooling the Americans whether on nuclear weapons, terrorism and now religious freedoms.

Tailpiece: Given the motivation for setting it up, the very first meeting of the NCM, instead of taking up the serious issues of minorities in Pakistan, discussed discrimination faced by religious minorities in India!