Nepali politicians unhesitatingly play the Chinese card, which, given the vastly increased Chinese financial clout, has created a challenging political space for India in Nepal in recent years. To its credit, though, Nepal has been conservative in partaking of economic activities that could propel it into a debt trap. Then, there is the growing influence of the West in Nepal. This tryst of Nepal with globalisation can only have challenging implications for India. 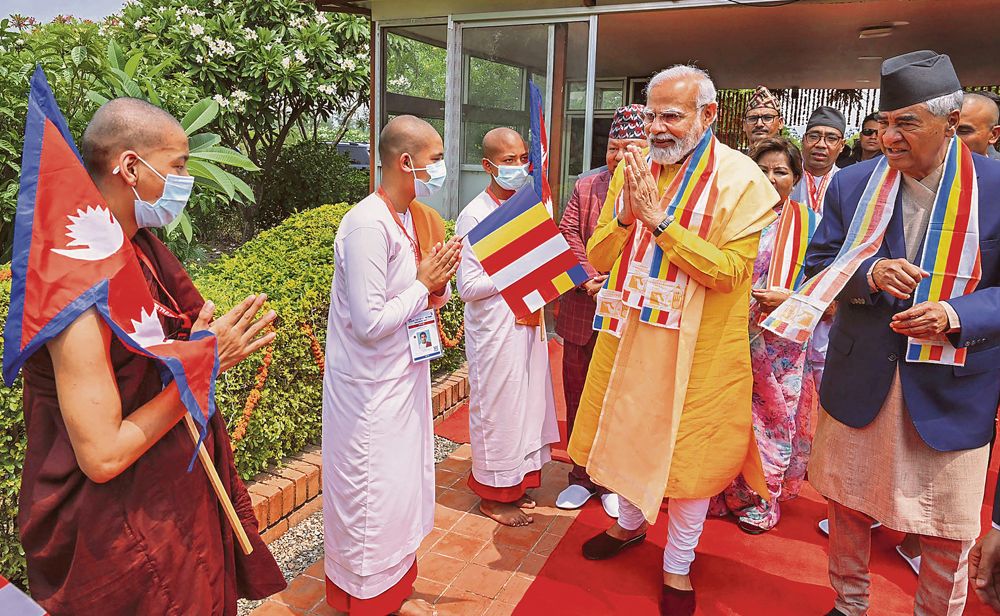 Prime Minister Modi visited Lumbini, the birthplace of Lord Buddha, in Nepal on Buddha Purnima, May 16. It was a visit of just a few hours but pregnant with symbolism, underscoring the common Buddhist heritage and this special civilisational link binding India and Nepal. With Nepal Prime Minister Sher Bahadur Deuba having visited India in April, the two high-level interactions have the potential of swinging India-Nepal ties in the upward direction in the near future.

Nepal is generally understood in India as a Hindu country, giving rise to ideas that it should declare itself as a Hindu State and not remain secular, as under its 2015 Constitution. However, the Nepalis are sensitive of their being under-recognised as the land of the Buddha; indeed, the most common car sticker in Kathmandu is ‘Buddha was born in Nepal’. Hopefully, Modi’s visit to Lumbini has helped assuage such feelings on their part.

The visit was also an important geopolitical signal, given the Chinese push to assert a certain Buddhist identity of theirs, including through helping build an international airport at Bhairawa, near Lumbini. For obvious reasons, Modi flew from Delhi to a newly built international airport on the Indian side of the border, at Kushinagar, before flying to Lumbini. The security and geopolitical dimensions apart, the use of the Kushinagar airport draws attention of those interested in the Buddhist pilgrimage circuit to the attractiveness of using this airport with its convenient access to both Lumbini and the major Buddhist sites in India.

Not unsurprisingly, five of the six agreements exchanged at Lumbini after bilateral talks between the two PMs pertained to education and strengthening of cultural ties between the two countries.

The sixth was in the critical area of hydropower cooperation, allotting Arun 4, a 679-MW project, to Shimla-based SJVNL, which is already building the 900-MW Arun 3 hydropower project in Nepal. Given the growing global movement away from fossil fuels, Nepal and India need to energise their hydropower cooperation for mutual and global benefits, with game-changing implications for Nepal’s economy.

India-Nepal ties tend to oscillate, given the propensity of Nepali politicians to beat the drum of nationalism, which in Nepal is essentially anti-India identity politics. This was particularly the case when KP Sharma Oli was the PM. He amended the constitution, incorporating some Indian territory in Uttarakhand in Nepal. This may just be a cartographic aggression, but has long-term implications and raises nationalist hackles. Indeed, nearly the entire Parliament in Nepal, including the current PM, Sher Bahadur Deuba, who was then Leader of the Opposition, voted in favour of the amendment.

Nepali politicians also unhesitatingly play the Chinese card, which, given the vastly increased Chinese financial clout, has created a seriously challenging political space for India in Nepal in recent years. To its credit, though, Nepal has been conservative in partaking of economic activities that could propel it into a debt trap.

And then, there is the growing and noticeable influence of the West in Nepal, including in the political sphere. Systematically, this tryst of Nepal with globalisation can only have challenging implications for India in time.

The general feeling in India is that a government led by Deuba’s Nepali Congress is better for India-Nepal ties, given its democratic traditions and ties with Indian political leaders. Keeping with the times, the Prime Minister burnished these links by visiting the BJP headquarters while in Delhi. This was, in all probability, a first by any Head of State/Government on an official visit to Delhi. He also visited Benaras, the city with abiding ties to Nepal in the cultural, educational and religious spheres, but, more importantly, being Modi’s parliamentary constituency. Incidentally, Prime Minister Deuba's spouse, Arzu Rana Deuba, who is increasingly emerging as a major leader in her own right in the Nepali Congress, has studied at St Bede’s College, Shimla, and Panjab University.

Nepal will see elections in 2022 at all three levels — local, provincial and federal. While the latter two are likely towards the end of the year, elections in over 750 municipalities (Kathmandu, smaller cities and rural municipalities) were held on May 13 and the results are in the process of being declared. These are a barometer of popular mood and could indicate the direction of the results of the provincial and federal elections.

Unlike 2017, when the UML (the communist party of Oli) were the clear winners, the results so far are showing a mixed bag, The Nepali Congress appears to have around 43 per cent of the top posts in these local bodies while the UML has 27 per cent. However, the Maoists — the party of former Prime Minister Prachanda — appears to have done surprisingly well and is likely to bag around 16 per cent of the posts.

In 2017, Oli, encouraged by the Chinese, engineered a successful merger of the UML and the Maoists and won a huge victory in the General Election. He couldn’t last the five-year term, falling out with Prachanda and being unseated by the Supreme Court allowing Deuba, with just about a third of the MPs, to form a government.

Neither the UML and Maoists coming together, nor any other coalition appears likely in 2022, increasing the chances of a hung parliament with an instability that has been a constant feature of democratic Nepal. This will have its regular dose of political games with ‘Aaya Rams and Gaya Rams’, but it may not be inimical for India and should keep avenues for development and societal partnership open.

The Nepali economy has taken a huge hit from Covid-19, with matters being compounded by the unsettled global geopolitics impacting its foreign exchange reserves. Relatively low consumption needs, coupled with an open border with India, are, perhaps, its best antidote at such times. Strong ties with India would, therefore, be in its interest and also serve India’s vested interests vis-à-vis Nepal.

For Deuba, the 2022 elections may be yet another shot at prime ministership. He has already served five times as PM of Nepal, but it is said that his astrologers have predicted seven tenures for him!