India will come apart if secular contract is torn

Shockingly, some campaigns are being led by people who are camouflaging their murderous rhetoric by wearing the saffron robes of Hindu renunciants. Last month, the theme of many speeches at a religious conclave in Haridwar was the need to ‘finish off’ Muslims. It would be easy to ignore this as the ranting of fringe Hindutva elements, but it’s no longer clear whether they are the fringe or the vanguard. 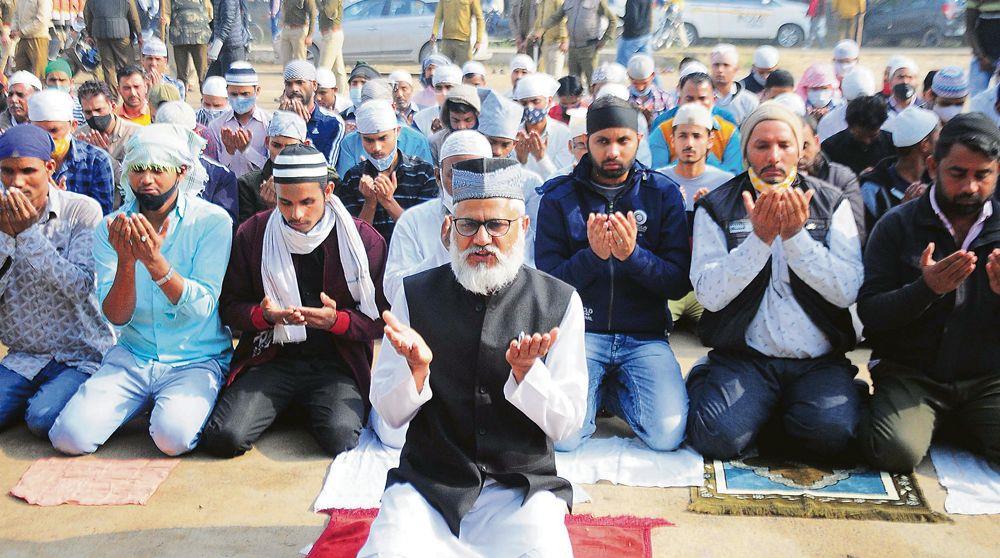 Systematic campaign: In Gurugram, Muslims are being prevented from offering namaz. Tribune photo

There is a famous Sherlock Holmes story about ‘the dog that did not bark’. Holmes solves the mystery by surmising that the murderer was known to the watchdog. In a like manner, we are witnessing scores of attacks, verbal and physical, on Muslims and Christians of the country. Yet, the watchdogs — those who rule the country and its law and order machinery — seem to have heard nothing. Perhaps, like the canine in the Sherlockian mystery, they are familiar and even friendly with the attackers and see no reason to bark, leave alone bite.

The signs have been visible for the past few years, but the crescendo has now intensified. A week ago, brazen attempts were made to prevent Christians from observing their major celebration of Christmas. Churches have been vandalised in Karnataka, Assam and Haryana.

As for the Muslims, after a string of assaults and murders by the so-called cow protection groups, they are now facing open calls for their elimination. In Gurugram, a systematic campaign is on to prevent them from offering their Friday prayers.

The reigning ideology of the country, Hindutva, is based entirely on a semi-literate, if not illiterate, understanding of history. There is the bizarre notion that the Muslim citizens of the republic today are somehow personally responsible for the atrocities that may have been committed by an invader or Muslim ruler hundreds of years ago. Christian charities and schools are accused of conversion, but there is no answer as to why after a century and a half of British ‘Christian’ rule, just 2 per cent of the people of this country profess that faith.

Most shockingly, some of this campaign is being led by people who are camouflaging their murderous rhetoric by wearing the saffron robes of Hindu renunciants. In mid-December, some of these leaders met at a religious conclave in Haridwar, where the theme of many speeches was the need to ‘finish off’ Muslims. It would be easy to ignore this as the ranting of fringe Hindutva elements, but it’s no longer clear whether they are the fringe or the vanguard of the Hindutva.

As of now, the proponents of Hindutva are happy using these elements to harvest votes, but there should be no doubt that the India we know will come apart if their project proceeds further. Just look at the map. Along the periphery, there are three Christian-majority states: Meghalaya, Mizoram and Nagaland; Arunachal Pradesh has a plurality of Christians; Jammu and Kashmir has Muslim majority; and Punjab is a Sikh-majority state.

Worse, if threats of ethnic cleansing and mass violence are actualised, be sure that those affected will not take it lying down. It is one thing to conduct ethnic cleansing in Nagorno-Karabakh, Serbia or Palestine, and quite another to contemplate it in India where the Muslim population is spread throughout the country and numbers over 200 million. As Naseeruddin Shah noted in a recent interview, “If it comes to the crunch, we will fight back”, and the country’s social and political fabric will be torn to tatters.

Note that none of the senior RSS/BJP leaders has publicly advocated any of this. The BJP governments in various states and the Centre have walked a fine line and ensured that, barring the anti-CAA riots in January, there have been no incidents of mass communal violence since 2014. But at the same time, they have looked away from individual instances of lynching, intimidation and harassment that are enabling a climate of increasing impunity.

Promoting religion by building temples is more of an opportunistic weapon to win elections than an act of religiosity. This is Hindutva whose goal is political power and, where needed, they have not hesitated to build alliances with a clutch of “Christian” parties in the North-East, the Akalis in Punjab and the PDP in Kashmir.

The anti-Muslim card has played well in a huge chunk of the country. The Godhra incident was used to mobilise for the Gujarat elections that launched Modi’s political career. Since then, anti-Muslim rhetoric and actions have been used to overcome caste divisions and polarise Hindu votes, especially in the Hindi-speaking heartland.

Most Hindutvavadis do implicitly, if not explicitly, support the notion of some kind of a second-class status for the minorities, something akin to what happens in Pakistan or Saudi Arabia. But they are not aware of the price that will be paid for this. No country aspiring to be a leading economic and political power can afford to have an underclass of hundreds of millions who will, inevitably, be the source of constant social and political tension.

India’s religions have a unique political sociology, as brought out by a Pew poll in June last year. Most people — Hindus, Muslims, Christians and Sikhs — are deeply conservative and prefer to be among their own when it comes to friendships, marriages and places of residence. Yet, all of them see respecting all religions as a core value. The survey found that conversions were rare.

By promoting Hindu nationalism as a means of gaining electoral power, the ruling party and its fringe/vanguard elements are disrupting this complex pattern without a clear idea as to where they are headed.

This pattern has been fairly resilient till now. Recall that even in the high tide of Islamist radicalism in the1990s, the Indian Muslims remained largely free of the extremist virus. But today, they are being constantly hammered by discrimination and intimidation. How long they can bear the onslaught is not clear, except that the consequences of the breakdown of the Indian republic’s secular contract will not have pretty consequences.