Indian-Americans’ voice being heard in US poll

Because of the experience in the 2016 elections, both candidates are reaching out to ethnic groups as even a small chunk of votes could potentially be decisive. 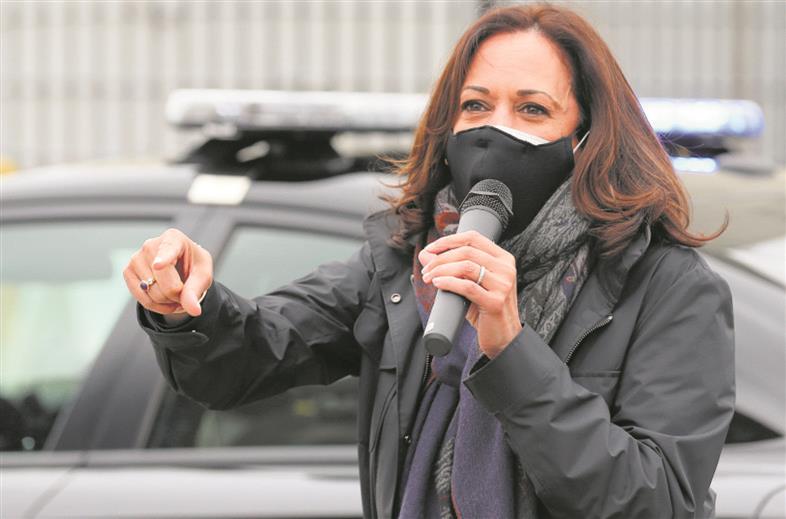 Because of the experience in the 2016 elections, both candidates are reaching out to ethnic groups as even a small chunk of votes could potentially be decisive. Like any democracy, the demographic size is at the heart of the community’s leverage in the electoral contest and, in this connection, both the present and potential strength of the community needs to be factored in.

The aspirations of the community, particularly its youth, need to be framed in the political and social realities of the US.

THE Indian-American electorate of nearly 2 million voters is a powerful force that can make all the difference — from North Carolina and Virginia to Pennsylvania and Michigan to Georgia and Texas and across the country,” wrote Democratic Party presidential nominee Joe Biden in an oped piece in the India West, an Indian-American community media outlet in the US.

During the US elections, it is common for the parties to tap into the vast network of Spanish language channels or newspapers across the country to put their message across. However, this may be a rare occasion when a contender in the US presidential race has written an oped article to woo the relatively small Indian-American vote.

The reason is obvious. Because of the experience in the 2016 elections, both candidates are reaching out to various ethnic groups in the battleground states as even a small chunk of votes could potentially be decisive. Like any democracy, the demographic size is at the heart of the community’s leverage in the electoral contest and, in this connection, both the present and potential strength of the community needs to be factored in. At the same time, the aspirations of the community, particularly its younger members, need to be framed in the contemporary political and social realities of the US.

The first phase of migration of Indians, prominently from Punjab, started in the early years of the 20th century through the modern tech hub of San Francisco, California. The immigrants, marginal in number due to legal restrictions for Asians, looked for railroad, lumber, or agricultural jobs. Even Congressman Dalip Singh Saund, who had got his doctorate from the University of California, Berkeley, in 1924, had to work as a farmer as he was denied citizenship till 1949. Born in Amritsar and an alumnus of the Prince of Wales College, Jammu, he later became the first Asian-American, the first Indian-American, and the first Sikh to be elected to the US Congress from California in 1956.

The second phase started after the immigration Bill was signed by President Lyndon B Johnson on October 3, 1965 that removed stipulations on migration from Asian countries. This enabled highly educated Indians to study and work in the US. Many of them went on scholarships. Journalist Anita Raghavan in her book — The Billionaire’s Apprentice: The Rise of the Indian-American Elite and the Fall of the Galleon Hedge Fund — made the expression ‘generation twice blessed’ famous as she described this group of immigrants. This group benefited from both the relaxation of US immigration laws and the enormous investment that India made in education following Independence, particularly in the research and engineering institutes. It was the role of some prominent Indian-Americans who came to the US in the 1970s that proved to be pivotal in the signing of the US-India nuclear deal.

The third phase was the post-1995 migration which was triggered by the sudden explosion in the demand for technological workers, including the Y2K migration project, coupled with an interest in India’s emerging markets, which opened the avenues for many finance professionals as well. Equipped with a strong background in science, technology, engineering and mathematics and a functional knowledge of the English language, nearly 75 per cent of the H1B non-

immigrant visa programme applications started coming from India and many who got the visa became American citizens in a decade or so.

However, as the number of visa holders further increased, there were structural impediments for the next step. There is a stipulation of seven per cent quota for each country in the US to acquire permanent residency rights, which is the first step to acquire American citizenship. Coming from one of the most populous countries, it will take at least 15 to 20 years, or even more, for many of the recent Indian immigrants to become US citizens.

It is here that the Democratic Party’s Vice-President nominee Kamala Harris, who is a Junior Senator from California, the state where, arguably, the maximum number of H1B visa holders reside, becomes important. Being well versed with the problems facing the H1B visa holders, she is one of the national politicians who have specifically mentioned the need to address this issue. Any reform that favours this vast group of the US residents and paves the way for their permanent resident status and, eventually, citizenship will further increase the political weight of the Indian-American community.

Even with a small strength, the community had already started registering its political presence. In the past, it has had two Republican Governors, namely Bobby Jindal, Louisiana and Nikki Haley, South Carolina. The lack of appeal of both is primarily because of the fact that younger members of the community are overwhelmingly Democrats and in line with the party’s commitment to working towards social justice and equality.

The highest strength of the Indian-American community is in California, Texas, New Jersey, New York and Illinois. Except Texas, all other states are Democratic. However, even the state of Texas, once the bastion of the Republican Party, is now attracting a lot of interest as it has become competitive. And the Indian community’s presence may be one of the factors underpinning this change from bottom up. A vast Indian-American community has its large presence in places like Houston and Dallas as they are employed in the energy sector, healthcare industry and NASA. Along with the ongoing presidential elections, there is also a Congressional election in Texas’ 22nd congressional district (part of the Greater Houston metropolitan area). The Democratic Party’s congressional candidate is former US diplomat Sri Preston Kulkarni, whose late father was an Indian immigrant.

The sudden noticeability of Indian-American community may be because of the peculiarity of the 2020 presidential elections. It is also a unique time for the community. Unencumbered by the parental expectations to take up narrow professional domains like medicine or finance, several millennials or supermillennials from the community are choosing varied professions and, thereby, also actively influencing the ongoing national debate. There is a recent explosion of Indian-American celebrities, particularly on popular streaming services like Netflix, for example, Mindy Kaling, Hasan Minhaj and Aziz Ansari.

The old notions of racial and social privilege are being questioned in the US as the country becomes more and more diverse. And, like the others, particularly the minorities, the Indian-American community’s voice is finally being heard and registered in the US political arena.