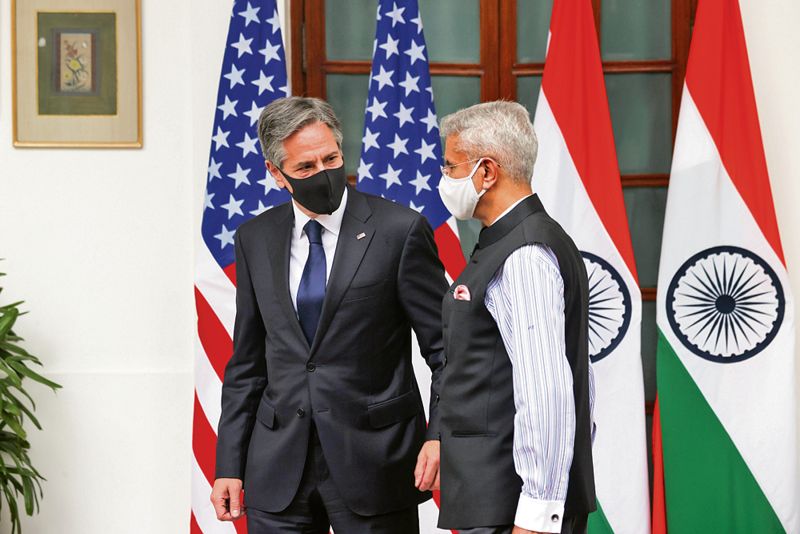 India matters: The world is far too globalised to take a narrow view in Covid-era diplomacy for a country of India’s size and capabilities. Reuters

The 22-hour visit by US Secretary of State Antony Blinken to New Delhi last week has exposed the schizophrenia in Indian minds about the world’s only remaining superpower. Five days before his meeting with External Affairs Minister S Jaishankar, the US Acting Assistant Secretary of State for South Asia, Dean Thompson, held a comprehensive briefing for the Washington media on the visit. It summed up the ongoing agenda of a bilateral relationship whose glass is full, to use a descriptive figure of speech. The following morning, the public discourse in India centred around half a sentence in the briefing that Blinken will raise the issue of human rights and democracy in India.

It got prominence because that is the way a vocal segment of Indian society wants to look at Indo-US relations. Thompson said Blinken would raise the rights matter ‘because we firmly believe that we have more values in common on those fronts than we don’t’, which means Washington will reiterate its broad commitment to freedoms, civil rights and democratic values. In turn, India too will reiterate such commitment and insist that it upholds those values. End of matter.

‘We believe India is going to be a really important part of continuing those conversations and building strong efforts on those fronts in partnership as we go forward,’ Thompson added. So, the US intends to partner with India in building democracy and advancing human rights in the world. This is not what Indians who assail the Modi government and its comradely state administrations on human rights, equality and democratic values want the US to do. The reality is that anything different is not going to happen.

The US fights for human rights only in countries which are its adversaries or enemies: Russia, China, Iran, Cuba, Belarus, Venezuela, Nicaragua, Syria and so on. The list is long enough to create an impression that the US is a global crusader for those whose rights are being trampled upon by authoritarian governments and forces spawned by regressive ideologies. India does not fit this bill. New Delhi is not Washington’s adversary. Therefore, contrary to what critics of the Modi government wish for, neither Blinken nor President Biden will do anything to provide any comfort to such critics.

The other side of the Indian schizophrenia is a tendency among die-hard supporters of the US in this country to take Washington for granted. And to give excessive importance to the American administration. Sometimes it descends to such ridiculous levels as to exaggerate the persona of even a Deputy Assistant Secretary in the Administration or a mere Consul General in an Indian metropolis. Will any respectable American media report anything said by a Director in the Ministry of External Affairs in New Delhi? Or a statement by an Assistant Secretary-General of an Indian trade body?

Such lily-livered cravenness distorts the realities of what is at play in Indo-US ties today. It upsets a perceptional balance of how New Delhi and Washington do serious business: such balance, which contributed to stability in Indo-Soviet relations from 1971 until the break-up of the Soviet Union, is essential to realise the full potential of what is possible today between India and the US.

There were many wheels within wheels which went into the conceptualisation of Blinken’s travel to India. And that of US Defence Secretary Lloyd Austin within 60 days of Biden taking office. In recent weeks, at least 150 members of both chambers of the US Congress have publicly come out in support of India on various counts. Israel is the only other country which can mobilise such extensive support on Capitol Hill. These were not mere statements of sympathy over the second Covid-19 wave or anything remotely similar to expressions of charitable offers of food under US Public Law 480 in the 1960s when there were starvation deaths in India.

A resolution of solidarity with India passed by the US House of Representatives in June sums up the reasons why Washington stands by New Delhi at this time. When House members were negotiating the contours of this resolution between Democrats and Republicans to make it bipartisan, one point of agreement across the aisle was that India had stood by Americans in their hour of pandemic distress last year. Scores of House members recalled that India had lifted restrictions on exporting therapeutics to help Americans in need.

Since the 117th US Congress convened on January 3, Indian Ambassador Taranjit Singh Sandhu has broken unprecedented ground in his outreach on Capitol Hill. He focused in particular on the Progressive Caucus, about whose support for India, frequent doubts were raised during the 116th Congress because many of its members were harsh on the Modi government’s policies when Trump was President. The results of the outreach were evident in the co-sponsorship of the June resolution in the House. Thirty-two of the resolution’s 41 co-sponsors were Democrats: several of them are ‘progressives’.

In India, the ‘vaccine maitri’ initiative of sharing vaccines with needy countries severely hit by the pandemic, has been heavily criticised during the second wave. On Capitol Hill, on the other hand, the ‘vaccine maitri’ with Hispanic countries like Bolivia, Paraguay, Argentina and Mexico have won overwhelming support for India among the Hill’s Hispanic Caucus. The export of vaccines to such countries enabled Sandhu to gain access to Hispanic members of the US Congress.

In the run-up to Blinken’s visit, John Walters, CEO of the influential Washington think tank, the Hudson Institute, referred to India as a ‘vaccine superpower’ when he hosted Sandhu for a one-hour discussion on what lies ahead for India and the US. Unfortunately, many Indians believe what is good for the goose is not good for the gander. The world has become far too globalised to take such a narrow view in the Covid-era diplomacy for a country of India’s size and capabilities.