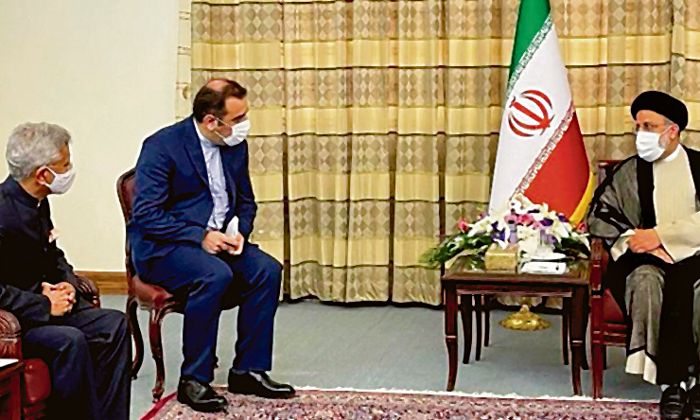 On priority: The time has come to resuscitate the Iran gas pipeline project. Twitter

External Affairs Minister S Jaishankar’s brief stopover in Tehran on July 7 has taken place at a time of great volatility in regional politics. Unfortunately, India has to adjust to a rapidly changing situation in regional politics as a mere observer with hardly any role as participant to mould the flow of events to meet our needs optimally. Nonetheless, the geopolitical currents around Iran do not, and will not, leave India untouched; nor can New Delhi hope to remain impervious to the downstream realignments that are to be expected, from a long-term perspective.

Broadly speaking, Jaishankar has kept himself busy on the diplomatic circuit in the West, delivering lectures on the emerging world order, whenever opportunities arose. Foreign interlocutors politely listen to India’s erudite minister. But wouldn’t they know India’s influence or capacity to navigate regional politics has waned lately?

The pandemic, for sure, seriously damaged the country’s international standing. The ‘world pharmacy’ gaffe apart, the apocalyptic images from the Ganga banks and the makeshift cremation grounds on sidewalks, and the tragic breakdown of the public health system have framed a dismal picture of India. Meanwhile, until the economy recovers, India has little to offer to the world community and it holds hardly any attraction to others as a worthwhile destination for trade and investment. As a driver of growth for the world economy, India’s role is zero today.

Considering these myriad disadvantages, Delhi’s primary motivation must have been to be in Tehran ahead of the Chinese. (Interestingly, Japanese foreign minister Toshimitsu Motegi is also heading for Tehran.) Nonetheless, there is symbolism in Jaishankar’s call on Iran’s president-elect Ebrahim Raisi to hand over a letter from PM Modi. Raisi somehow had escaped India’s attention. But then, India’s diplomacy toward Iran had been in a state of suspended animation through the Trump presidency.

President Joe Biden is inclined to return the US to the matrix of the 2015 Iran nuclear deal, and a lifting of sanctions against Iran is to be expected shortly, possibly before Raisi is sworn in as president on August 15. Suffice to say, early birds catch worms, as they say, and Indian diplomacy is shifting gear before the road to Tehran gets crowded. But India should still have clarity of mind as to what it is looking for. Random diplomatic peck at one-upmanship without a grand design doesn’t make sense.

Three factors must be kept in view. One, Raisi’s priority is economy, not geopolitics (which is Jaishankar’s forte.) Two, Raisi welcomes India’s partnership in Iran’s development. Three, Raisi is a nationalist and very focused about his priorities. India must think up big ideas.

Iran is a major oil and gas-producing country and a mutually beneficial relationship based on energy cooperation can provide the foundation for collaboration in diverse fields. India’s attraction as a top importer of oil and gas globally needs no elaboration.

The biggest stumbling block during the recent years has been Trump’s insistence that India should prioritise the US shale industry as its principal energy source. India buckled under Trump’s pressure to replace Iranian oil with his shale oil. But there has been a paradigm shift. The shale heartlands of America are not exactly Biden’s heartthrob.

Biden wants to make the climate crisis his top priority and there is little doubt that we can expect a decline for America’s fossil fuel industry that had flourished under the light touch of the Trump administration. Candidate Biden is on record that he would ‘transition away from the oil industry’ because it ‘pollutes significantly’ and has to be replaced by renewable energy over time. Biden is likely to resort to a careful dismantling of the shale industry by initially curtailing drilling on federal land, while he gently tips the market economics against fossil fuels by whittling away at the amount of oil and gas that can be produced and raising costs.

We must anticipate that fracking will become far more expensive under Biden as he rolls back many tax incentives and imposes tougher regulations on methane emissions and other environmental protections. Looking ahead, therefore, Iran becomes an indispensable energy partner.

Of course, while India will step up oil imports from Iran, which has been open to long-term contracts previously, what we should look at now is that single big idea devolving upon Iran’s massive gas reserves — second largest in the world after Russia — that holds the potential to galvanise the entire relationship and lift it out of the trough.

The time has come to resuscitate the Iran gas pipeline project. With the lifting of the US sanctions against Iran, there is no spoiler blocking India’s pursuit of this project. Russia’s Gazprom had evinced interest in the Iran pipeline project. Russia has vast experience in building undersea pipeline. The Nord Stream 2 is nearing completion shortly; it is a 1,230-km pipeline connecting Russia with Germany across the exclusive economic zones of Finland, Sweden and Denmark. An undersea pipeline from Iran to India, avoiding Pakistani waters, would be of the same length but much less problematic.

Germany’s grit to press ahead with Nord Stream 2 underscores that pipeline gas is cheaper than LNG from the US, that it’s a type of clean energy offering environmental benefits over other fossil fuels like coal and, above all, is the most dependable source of supply for an economy that is critically dependent on energy imports. Iran has the capacity to meet India’s needs for decades to come. Most importantly, a mega project of such nature will inevitably spur large-scale industrial collaboration between Iran and India. Iran can be the last frontier for launching India’s post-pandemic economic recovery.