Infectious, but not so deadly

New virus may spread faster than SARS, but will cause disease that is not as severe 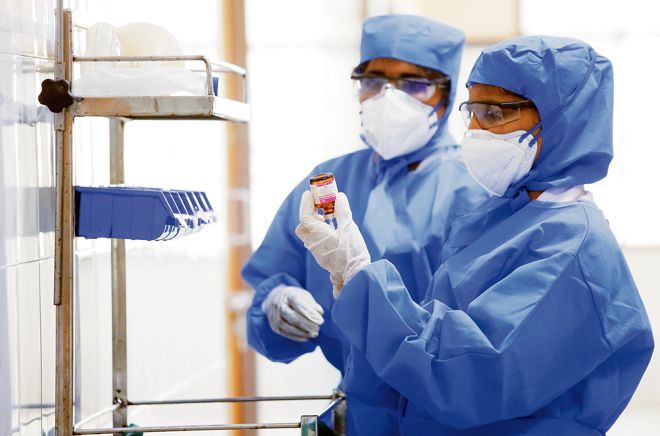 On alert: Contingency plan for a surge capacity is needed at health facilities.

The new coronavirus situation continues to unfold in China and other countries, causing global alarm. The number of deaths from this virus has surged to 170 and the cases to more than 6,000. China has taken drastic measures — cities are being locked down, putting in quarantine some 56 million people, the public transport system has been suspended, and cinema houses and cafes have been shut. As a result, the stock markets have tumbled globally.

It began in early December, when a transport worker exposed to a seafood and animal market in Wuhan, fell ill. Wuhan is home to 11 million people. The first alert was reported on December 31. It was confirmed that the illness was caused by a new coronavirus, similar but genetically distinct from the one that causes SARS (severe acute respiratory syndrome), the first pandemic of the 21st century. The new virus has been temporarily named ‘2019-nCoV’, ‘n’ meaning novel or new and CoV for coronavirus.

According to WHO, coronaviruses are a large family of virus which cause illnesses ranging from common cold to much more serious cases of pneumonia and death. Common symptoms include fever, cough, shortness of breath and breathing difficulties. Early analysis shows that about 20% cases in the current outbreak progress to severe disease. Since this is a new virus, not much is known about it. The incubation period is two to 14 days. Most of the cases occur in men and those above the age of 40. Those with underlying conditions such as diabetes, heart disease or cancer are at risk of contracting a severe illness.

The outbreak is presently raging around the world and the cases have surged in the past week. However, these are still early days and the situation is evolving rapidly, with new information nearly every hour. More infections in more countries are expected to occur.

The actual impact of this virus will depend on three factors: (1) its transmissibility or how contagious it is; (2) its severity or fatality rate; and (3) whether cases with mild or asymptomatic can also spread infection to others. Presently, there is not enough information to reach a conclusion.

What is clear, however, is that the cases originated initially from exposure to seafood and live animal market, but now the virus is spreading from human to human. Early data shows that one case may infect around two others in close contact, which is slightly more infectious than SARS. Whether this rate, also called reproductive rate or ‘Ro’, can be brought down sufficiently or below 1, and thus end the outbreak, remains to be seen.

The good news is that this virus doesn’t seem as lethal as SARS, with case fatality rate or the proportion of cases that result in death estimated at 2.9%. Compare that to 11% in the case of SARS, or nearly 50% for ebola. In practical terms, it means that the new virus could spread more widely and efficiently than SARS, but will cause disease which will not be as severe.

Nosocomial transmission — spread within healthcare facilities — remains a major risk, as was in the case of SARS. Many healthcare workers are reported to have been infected and some have died.

New evidence is emerging of human-to-human transmission outside China, such as in Germany, Japan and Vietnam. These cases show that countries are now faced with the task of limiting the spread of the disease on their own soil, not just seeking to identify and quarantine patients who had travelled from China.

To date, there is no specific medicine available to prevent or treat the new coronavirus nor a vaccine licensed to prevent, although efforts to develop these are going on both in the US and China.

Only one confirmed case of the virus has been reported in India so far. The incoming airline passengers, and those coming by seaport from China, especially Wuhan, are undergoing thermal screening. Over 40,000 passengers at 21 airports have been screened. A 24x7 helpline has been established at the National Centre for Disease Control (NCDC) in New Delhi.

The Ministry of Health and Family Welfare has issued a travel advisory, advising people to refrain from travelling to China. Those who have returned from China are asked to self-report to hospitals and health centres. Testing facilities are available at NIE, NCDC and other centres.

Since most cases are likely to occur through person-to-person transmission (by coughing and sneezing or by personal contact with infected person and touching infected surface), routine recommendations by WHO at individual level are nothing different: wash hands frequently, cover your mouth and nose when you cough or sneeze, don’t go to Wuhan or China for that matter, and avoid close contact with anyone who has fever and cough.

At the government level, each country is expected to review its ability to find, stop, and prevent coronavirus cases, by ramping up surveillance, early detection and rapid containment measures. Contingency plan for a surge capacity is needed for case management at health facilities to cater to additional cases. Countries also must demonstrate transparency and share information and expertise. Seamless communication, including through use of social media, is key to prevention and avoiding disinformation.

Indeed, the new situation is both a challenge as well as an opportunity for the country to strengthen its core capacity to detect early any emerging infection and respond rapidly to limit or/and contain its spread.