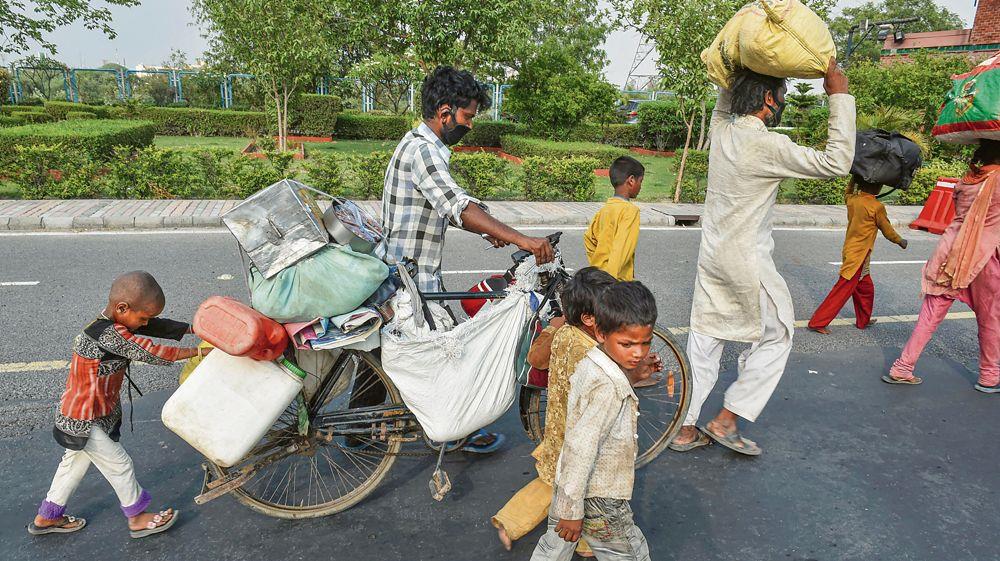 Removed from reality: Politicians and officials could not anticipate the disaster they were inviting by enforcing the strictest lockdown in the world.

A former interim chief of the CBI, M Nageswara Rao, retired from the IPS on Friday after a long career marred by allegations of varying degrees of severity. On the eve of his retirement, he unleashed a tirade against the noble Abul Kalam Azad, a great leader of the national movement, and various others for the ‘Abrahamisation’ of the curriculum and the deracination of the Indian mind. Many upright officers have fallen for the lure of post-retirement sinecures, what to say about those with a chequered history of compromised investigations. Hindutva, surely, is the flavour of the season and a retiring officer shouting half-baked slogans or mouthing mindless mantras for political patronage is not just a small sign of desperation, but a bigger billboard announcing the new normal in the officer-politician relationship. With such a nexus defining India’s governance, there isn’t much to expect in terms of transformational policies creating a new society.

The best example of the officer-politician combine letting down the society in recent times is the Covid lockdown. India had the severest shutdown in the world, scoring a perfect 100 according to parameters prescribed by Oxford University’s Coronavirus Government Response Tracker. This was probably one of those rare occasions when India was cited right on top of a global rating exercise for any endeavour. How did we achieve this? Simple, the government unleashed the police on the citizenry, forcing people to skirt the highways and walk and sleep on the rail tracks, only to get mowed down by the elusive train.

The strict enforcement of the Covid curfew only proved the traits of passivity, vulnerability and innate honesty of the Indian poor. The biggest political science lesson of the lockdown is yet to be understood: the easily excitable Indian, who can be manipulated to run riot over religion, caste, regional or linguistic sentiments, is ready to accept the toughest oppressive measures if he or she believes that it is for the common good. Without breaking into shops for food or commandeering vehicles to reach home, the poor trudged on empty stomachs and in the bellies of cement-mixers with neither the politician nor the officer caring how they fared.

When the police began enforcing the lockdown by twirling the truncheon, India had just about 500 cases. Yet, there was no hesitation in shutting down all economic activities, ringing in misery to all but the ruling class. And therein lay the government’s lack of understanding of the Indian situation and its bankruptcy in planning. The politicians and officials had never felt the uncertainty of loss of jobs or salaries and hence could not anticipate the disaster they were inviting by enforcing the strictest lockdown in the world.

After about 70 days of lockdown, some of the political masters realised that the economy was lying in a shambles. But not all; Uddhav Thackeray even last Saturday was not ready to let the economy restart. It seemed as if there is a huge chasm between the rulers and the ruled. The people whose livelihood has been impacted beyond repair cannot care for life any longer, whereas the rulers care for lives — primarily their own — because their livelihoods have not been affected at all. This dichotomy has got reflected in the response to the pandemic by all the governments, be it the BJP-ruled Gujarat, or Maharashtra with a Shiv Sena-Congress-NCP alliance government, or the Left-ruled Kerala. In fact, Kerala did the best in terms of headline management with even global news outlets praising its model of containment, though reality remained the same everywhere. It was merely the police unleashing the lathi at the common man and calling it a lockdown or a triple lockdown, with nothing genuine being done to tackle the transmission of the virus despite the complete compliance of the people.

The death of Delhi Police constable Amit Kumar exemplifies the Central and state governments’ loss of opportunity to ramp up health facilities during lockdown. The constable and his colleague knocked at about four hospitals in a day in vain before Kumar succumbed to Covid in early May. The question remains: What was it all about? India now has the fifth-largest number of fatalities and the third-largest load of Covid cases; so, what did we achieve by the lockdown? An unprecedented contraction of the economy, large-scale destruction of livelihoods and a huge reduction of income for all but the politician-officer combine. Even salaries of personnel in the lower ranks of the government are not being paid, yet certain politicians and officers continue to talk about further lockdowns.

For instance, Kerala, after all the early claims of having defeated Covid, now has locked down large parts of its capital where the cases are surging, with the latest count in just this one district being 2,837. No wonder this is one state where the politician-officer combine has been forcing its fangs deep into the body politic, the latest instance being the gold smuggling expose in the midst of the pandemic. The CM’s principal secretary — a promotee IAS officer — is being questioned by the NIA over his relationship with a key accused in an audacious gold smuggling racket involving the consulate of the UAE. If that itself is a new low for the country’s officialdom, Kerala has set new benchmarks for the rest of the country with the very same officer getting the same accused, who failed her matriculation exam, appointed in a managerial position in a state government undertaking, paying PricewaterhouseCoopers Rs 2.7 lakh every month towards her salary.

The correction ought to come from within the establishment, from those who still have it in them to say no to the bullies and criminals. There is none more credible in our public life than a bureaucrat with integrity, who doesn’t care for postings, pre or post-retirement.