Introduction to Bathinda : The Tribune India

To the uninitiated, it is a district which over the centuries has seen many battles. I had never been there before and so it was quite a revelation. I was to discover later that not for nothing was the gun called the ‘Gaina of Malwa’ (ornament). One of the biggest demands from the people and the politicians of the area was that of getting arms licences. They would give an arm and a leg to get one 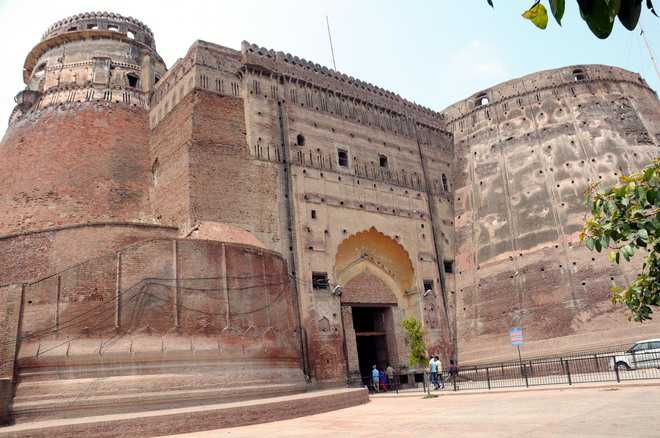 In the summer of 1973, I got posted as SSP, Bathinda. It was with some trepidation that I received the news because I was going to a big district from a very small one (Kapurthala). Mansa, a district now, was a subdivision of Bathinda. As we drove, the landscape started changing Faridkot onwards and sand dunes appeared on both sides of the road. Camels started dotting the landscape, with men walking, riding or sitting by the roadside carrying weapons and bandoliers. Where had we come and what would be our experience here? I had never been there before and so it was quite a revelation. I was to discover later that not for nothing was the gun called the ‘Gaina of Malwa’ (ornament). Bathinda, to the uninitiated, is a district which over the centuries has seen many battles. Qila Mubarak in the old city has been witness to these exchanges. The Qila has witnessed the coming and going of Ghazni, Gauri, Prithviraj Chauhan, Razia Sultan and many more. In Sikh history also, the battles of Gurusar and Muktsar are legendary from the region. The battles of Mudki and Ferozeshah feature prominently in the Anglo-Sikh wars. One could go on, the list is long.

One of the biggest demands from the people and the politicians of the area was that of getting arms licences. They would give an arm and a leg to get one. It was an ornament for them — gun in hand, bandolier crossed on the body and a swagger which is rare. When the first visitors started coming, I found a change in dialect and had to seek the help of the staff. However, gradually, one got into the routine but it took time to grasp the local culture. Once an MLA came and told me about a murder in Mansa, which he wanted investigated by a senior officer. I forgot to take down the details so I rang up the SHO. He was quiet for a moment and then asked as to which murder I was referring to as there had been seven in the previous week. This floored me as in the whole of Kapurthala district, only a couple of murders were reported annually. Thereafter, I kept careful notes because the most oft-repeated requests were for re-investigation of murder cases. This created its own cycle of corruption and weakening of cases. To recount another case, a villager once came to complain about the investigation of a murder case. I told him if he wanted, I would get this case investigated by the DSP if he was not satisfied with the SHO. In reply, he said that ‘thana bun leya hai’. I was left scratching my head but on further quizzing realised that the local police had been compromised, as also the DSP. I was in a fix because I tended to believe him and at the same time could not make up my mind regarding the officers. The only way out was to hand over the investigation to an SP and thereafter transfer it to the CID if it still did not work out. Later on, I came to know that in murder cases, hefty sums of money were passed around before a planned murder. Putting senior officers in charge and involving them in murder cases right from the beginning helped mitigate this problem largely. We managed to tackle the menace through close supervision, involvement of senior officers and close liaison with complainants. The complainants also played games and had the habit of naming more persons in the FIR than the actual number so as to involve the whole family in litigation. The real from the false had to be carefully sifted because as soon as an innocent person was dropped from the chargesheet, accusations of corruption began to be levelled against the police. However, if the police investigation had been fair, these accusations died down because the people of the area knew the truth.

A common cause of murders was revenge. Enmity lasted generations and crimes were regularly avenged. Forgiveness and the quality of mercy were in short supply. I remember a case in which a young man, about 20 years old, killed a grown-up man and then proceeded to the police station to confess his crime. I asked him about his motivation and he replied that his mother was expecting him when his father had been murdered by the victim and ever since he grew up, his mother had only one demand — ‘avenge your father’. It was ingrained in him and at the first available opportunity he had done the deed — that is Malwa for you.

Then there was the big problem of ‘canal cuts’ which invariably led to fights and killings. Unlike the Doaba, irrigation here was mainly through a network of canals and dates and time are fixed for areas and farmers for their turn. A lot of time the turn came at night and upstream farmers would make ‘cuts’ before their legitimate turn to get more water, and deprived the downstream ones. This led to clashes and murders. There was a separate head for ‘canal cuts’ in the crime diary. I found very detailed standing orders on the subject especially by Choudhry Ram Singh, who had been a DIG of the area. The process of learning from these very experienced officers was a continuous one and I offer one instance. Two days before Diwali, the DIG, Ferozepur Range (the late CK Sawhney, who retired as DGP, Punjab), asked me about my plans for a peaceful Diwali. He advised me to start early in the morning on Diwali day and head for the furthest police station — I think it was Boha, about 200 km from Bathinda city. I was to carry out a surprise check and ascertain whether patrols had been sent out. I was to wind my way back visiting all police stations and also to verify in some villages if patrols had reached there. Of course the first police station I visited subsequently had alerted the others and there was full compliance and no absentees. But, that was the purpose of the exercise: to get everybody out and on duty.

I was carrying my sandwiches and so did not have to make a halt. I came back late in the evening having travelled hundreds of kilometres on dusty single roads where upon I carried out my last instruction from the DIG, which was to check whether the sentry had accepted any Diwali sweets. I got a negative answer, to my satisfaction. Next morning, I learned that the number of murders was down by about 80 per cent as compared to previous years.

There are so many stories to narrate but, all said and done, it was a great experience both professionally and in learning the differences of dialect, mannerism and way of life. The people were generally respectful towards authority and unlike Doaba and Majha, they never came to the residence for any work. Exceptions are always there though and there was the case of a very powerful MLA and another politician who claimed proximity to the Chief Minister. One morning in the beginning of my tenure, when I was dealing with a complainant, they barged into my office. Without knowing who they were, I requested them to wait outside till I was free. There were looks of incredulity and shock on their faces and they introduced themselves. I repeated my request and they went out. I called the office orderly and instructed him that this should never be repeated. His answer was that they had always come like this. I knew then that I had made implacable enemies. After about two years, the two gentlemen finally succeeded and I got my orders for posting as SSP, Patiala. Also revealed was the reason for my posting to Bathinda. These two acolytes of the CM had tied up the local administration at the highest level and got all their work done without his knowledge. The CM being a very shrewd politician injected me into the equation knowing that I would not give in to those two, and that was what happened from the first day. The requests, rather demands, for posting and transfer of SHOs, investigation of cases, grants of arms licences and a free run of the police stations were denied. So they went running to Chandigarh with their complaints against me. To his credit, the CM never interceded on their behalf and I suppose they learned their political lesson delivered by a masterclass politician. When the new orders came, we packed our stuff and off we went to Patiala, from where we finally landed at the secretariat in Chandigarh — a story for another time.