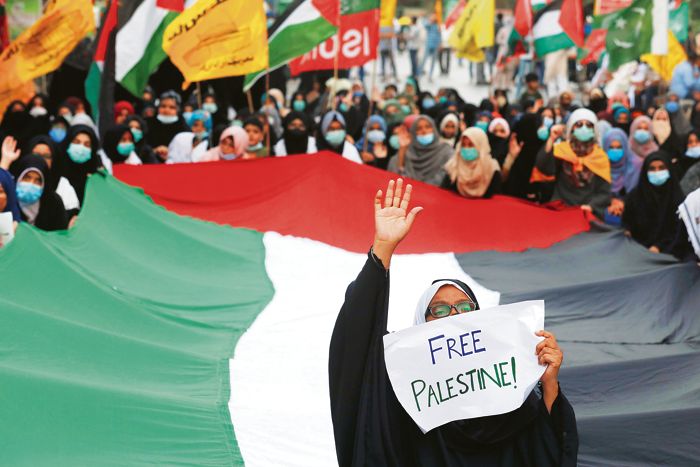 human touch: Issues pertaining to Jerusalem need to be handled sensitively by the Bennett government with understanding of Palestinian concerns. Reuters

The absence of diplomatic relations with Israel for five decades left people in India with relatively little knowledge of Israeli thinking, about its neighbourhood. Moreover, India had little or no contact historically with the Jewish people in Israel and across the world. There was also little public understanding of the prevailing differences, aspirations and rivalries of people in West Asia and the Gulf Region who belonged to Judaism, Christianity and Islam — which all regard Jerusalem as their holy city.

There is a deep religious divide in Israel now, between the Jewish people and its minority Muslim population. This is very different from what happened in India, where the country was divided on religious lines in 1947. India adopted a secular Constitution. Pakistan, which believed in Jinnah’s ‘two-nation’ theory of dividing people on the basis of religion, fell apart in 1971, with the creation of Bangladesh. This has raised the question if religion alone could be a viable basis for nationhood.

Prejudices prevail even today, between people who practice the three ‘Semitic’ faiths in West Asia. Jerusalem is the holiest city for Christians, as Jesus Christ was crucified, and buried there. For the Jewish people, who suffered the trauma of holocaust, Israel, with Jerusalem as its capital, is the ‘Promised Land’, where they had sought to live in, for centuries. The Temple Mount in Jerusalem is the third holiest site in Islam, after Mecca and Medina. The recent flare up in the Palestinian territory of Gaza arose from protests in east Jerusalem. The protests followed moves by Israel for the eviction of six Palestinian families from their homes. The Palestinians feared an adverse decision against them by the Israeli Supreme Court. They felt that the territory they were being expelled from was their own under international law. The situation escalated, with huge exchanges of fire between the Palestinian residents in Gaza and the Israelis. As many as 256 Palestinians, including 66 children, were killed in the exchange of fire. India has appropriately opted for a delicate balancing act in its relations with Israel, on the one hand, and its Arab neighbours, on the other.

While India’s relations with Israel have expanded, PM Modi also developed a close personal relationship with his Israeli counterpart, Benjamin Netanyahu. Modi, however, also made it a point to visit the Palestinian capital Ramallah and call on Palestinian President Mahmoud Abbas. Recent years have also been marked by a remarkable new relationship between Israel and some of its Arab neighbours, which, like Israel, have faced a deteriorating relationship with Iran.

Six Arab countries — Egypt, Jordan, Bahrain, UAE, Sudan and Morocco — now have diplomatic relations with Israel. Other leading Arab countries like Saudi Arabia have discreet and direct talks and negotiations with Israel. They have a shared interest in countering the role of Iran in the region, including Tehran’s support for radical Arab groups. Over the past few decades, the West Asia region has seen a shift of focus from Arab-Israeli rivalry to Arab-Persian (Iranian) rivalry.

There was disappointment in the Arab world when the then PM Narasimha Rao recognised Israel. Arab countries, however, soon recognised the reality that India would retain an interest in, and sympathy for, the Palestinian cause. Interestingly, Modi flew to Ramallah from Jordan in a Jordanian helicopter, escorted by Israeli military aircraft, for a meeting with Mahmoud Abbas. In recent discussions in the Security Council, on developments in Gaza and Jerusalem, India’s Permanent Representative TS Tirumurti clearly spelt out what India expected from Israel and Palestine — ‘Immediate de-escalation is the need of the hour. We urge both sides to show restraint, desist from actions that exacerbate tensions and refrain from attempts to unilaterally change the existing status quo, including in east Jerusalem, and its neighbourhood’.

Israel recognises that European powers are increasingly inclined to be sympathetic to the plight of the Palestinians. In an important gesture of sympathy, US Secretary of State Anthony Blinken announced that the US had decided to reopen its consulate in Jerusalem, after his meeting with Abbas in Ramallah. Washington evidently believes that Netanyahu’s hardline on the Palestinians, particularly in Jerusalem, is counterproductive.

While the Palestinian issue is not going to be resolved in a hurry, it is noteworthy that President Biden is taking interest in rehabilitating Palestinians, whose homes in Gaza were destroyed by heavy Israeli bombardment. In the meantime, Israel will press ahead in getting formal diplomatic recognition from Arab countries, like Saudi Arabia. Israel would be well advised to not permit any further encroachment into Palestinian lands, especially in Jerusalem. Viable shape has to be given to measures to end Palestinian alienation.

There is little doubt that Egypt, and possibly Saudi Arabia, will be utilised to keep Hamas away from becoming trigger-happy. A major concern of Israel has been the role of Iran in the region, where Tehran is gaining substantial influence, while arming radical groups like the Hamas. The main question now is whether Iran will continue with these policies if Tehran negotiates a deal with the US and its European allies, which would end nuclear sanctions against it.

Netanyahu was unable to put together a viable coalition after the recent elections. Israel now appears set to form an ideologically divided coalition, led by a right-wing PM Naftali Bennett, who is a former Israeli military commando. The coalition government will include a left-leaning foreign minister, Yair Lapid. Bennett has a two-year term and will be succeeded by Lapid. The Biden administration would be happy with what has transpired. The Biden administration will be busy urging the Israelis to arrange a measure of reconciliation with the Palestinians. Issues pertaining to Jerusalem need to be handled sensitively by the Bennett government, with understanding of Palestinian concerns.