It’s more than a walk : The Tribune India

It’s more than a walk

Essential to understand the symbolism of Bharat Jodo Yatra 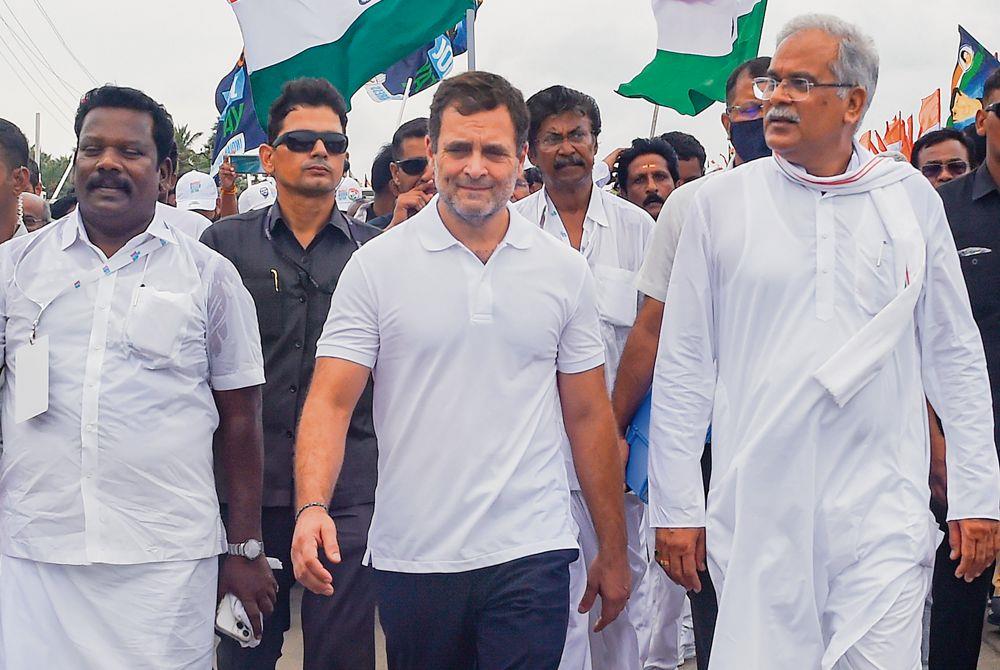 Path forward: As Rahul and others in this yatra are walking, passing through villages and towns, listening to ordinary people, it feels like a beginning of change. PTI

At this dark moment when toxic and instrumental politics is the order of the day, and the heavy baggage of information pollution transforms everything into its opposite, it is not easy to make sense of the Bharat Jodo Yatra. It can be condemned and ridiculed by the ruling regime and its propaganda machinery, and reduced into some sort of gossip: say, the price of the T-shirt Rahul Gandhi has been wearing during the yatra, or the ‘five-star’ facilities available in the container where he sleeps and takes rest. And the likes of Smriti Irani and Sambit Patra would not hesitate to make all sorts of false and provocative statements to devalue this journey from Kanyakumari to Kashmir. Furthermore, there are cynics and political commentators who would evaluate it through a purely utilitarian scale — whether the yatra would at all help the Congress as far as electoral gains are concerned, particularly when Modi’s ‘larger than life’ image or Amit Shah’s election-winning machinery seems irresistible.

Even if the yatra doesn’t lead to any electoral gain, it might prove to be a catalyst, for it urges us to be free from fear.

Yet, amid this noise, it is important to understand the significance of the 3,570-km yatra — its symbolism and possibilities. To begin with, let us reflect on the aesthetics and philosophy of walking. Throughout human history, travellers, pilgrims, saints, mystics and ordinary people walked. And as our own political history suggests, Mahatma Gandhi walked, walked and walked. Contrast this form of walking from the way the rich and the powerful move around: politicians, industrialists and celebrities avoiding the ‘polluted’ contact with people like you and me through their chartered planes; or, the cars/official vehicles of MLAs, MPs and ministers running fast with the visible and loud demonstration of naked power, and the cops blocking the traffic and hampering the movement of ordinary people. However, mindful walking, instead of being an alienating experience, can prove to be therapeutic — politically, culturally and spiritually. It opens our eyes, widens our horizon, and enables us to understand the ethnography of everyday life. Imagine you are walking through the Marine Drive in Mumbai. Of course, you look at the tides of the Arabian Sea; you see the glitz of the Malabar Hills and the skyscrapers. But then, you see something more; you see a man from Gorakhpur selling bhelpuri, and persuading you to taste it. You see a transgender person clapping, smiling and walking with you. You see college students moving around, laughing, crying, nurturing relationships and cracking jokes. You see beggars, vagabonds, and people with lost dreams. In other words, you see hopes and dreams, struggles and sufferings, and mind-boggling wealth and everyday struggle for mere survival. Walking connects, makes you grounded, and removes the seeds of narcissism. It is sad that most of our politicians and bureaucrats do not walk. As fearful and alienated beings, they cherish only one kind of power — the power that separates and intensifies the distance. They remain ignorant of the power of empathy — the power that unites.

And this sort of meditative walking, be it physical or metaphorical, leads to the continual process of self-discovery, or the discovery of a culture or a civilisation. Without the journey that Mahatma Gandhi undertook after coming back from South Africa, it would not have been possible for him to understand the pain of a defeated/colonised nation, and then arouse its moral and political imagination for the struggle for Swaraj. In a different way, through his intellectual journey, Jawaharlal Nehru ‘discovered’ India: the tales of an old civilisation coming to terms with the new age. In fact, the possibility implicit in a yatra fascinated many — from Vinoba Bhave to Baba Amte.

Think of the age we are living in. There is no fraternity because we have not yet been able to combat caste hierarchy and patriarchal violence. Moreover, the sort of hyper-nationalism that the ruling party has sought to normalise, far from uniting us, has erected walls of separation, ghettoised our consciousness, and led to the psychic/cultural division of the country through the act of othering the Muslims and other minority communities. Likewise, the gospel of neoliberalism has further marginalised the poor, the peasantry and the working class. While the narratives of seductive consumerism and the tales of ‘success stories’ of select billionaires/cricket and Bollywood stars fascinate the new middle class, and create malls/multiplexes/spectacular gated communities, the majority of our people live in overcrowded slums, non-hygienic lower middle-class colonies, and in streets and railway stations. In a way, India is indeed wounded and divided.

Hence, I have no hesitation in saying that the Bharat Jodo Yatra appears to be a refreshing departure. As Rahul Gandhi and all those who are participating in this yatra are walking, passing through villages and towns, meeting ordinary people and listening to their tales, I feel, it is a beginning. Possibly, it will enable him to see himself beyond the privilege of being born in the Nehru-Gandhi family, overcome the stigma of being seen as a ‘part time’ activist, and, as I hope, realise the power of empathy, compassion and the art of listening. And all those — civil society activists, public intellectuals and ordinary people — who are walking with him, I like to believe, will give us what we miss today — the strength to regain our agency, articulate our voice, and try in our own ways to unite and heal this terribly divided country.

Even if the yatra doesn’t lead to any electoral gain, it might prove to be a catalyst. After all, it urges us to be free from fear.