Keeping count of the lives lost to lockdown : The Tribune India

Keeping count of the lives lost to lockdown

The lockdown deaths bear an uncanny resemblance to the fatalities precipitated by demonetisation, when people died standing in queues or committed suicide due to anxiety, distress and other related problems. One wonders whether this figure too shall mount considerably after May 3. Moreover, who is going to keep track of the tragedies occurring due to economic devastation that is to follow? 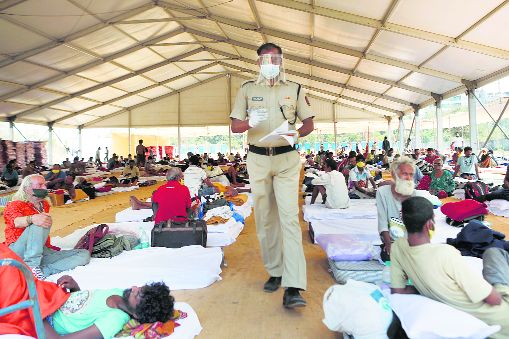 Long haul: Strict police action has also resulted in inconvenience to the citizens.

On April 14, hours after Prime Minister Narendra Modi announced that the lockdown was being extended up to May 3, Krishna Pujari, 35, a temple priest in suburban Mumbai, reportedly committed suicide. He had been hoping to leave for his hometown of Udupi in Karnataka but the extension left him so anguished that he hung himself in the kitchen of the house he shared with three other priests.

Varakala Nayudu, a 45-year-old construction worker, was run over by a freight train, while trying to cross the state border on foot along the rail track, from Tamil Nadu where he had been stranded, into Andhra Pradesh because he yearned to see his children. Apparently, the police hadn’t allowed them to walk across by road, and so he and some relatives chose to use the rail tracks to reach their destination.

These are just two of the victims who succumbed to the sudden, traumatic disruptions to normal life, triggered by the nationwide lockdown. While all eyes are riveted on the Covid-19 fatalities, which stand at over 500 now and keep spiralling daily, it might be sobering to know that more than 225 Indians lost their lives as collateral damage during the same period, on account of the very measure that was meant to control the spread of the epidemic and prevent deaths.

Indeed, a look at how exactly the lockdown has directly or indirectly proved lethal to random individuals caught unawares and unprepared, provides a poignant insight into the law of unintended consequences at work. A majority of these non-Covid-19-related deaths were due to the following:

Fear-related suicides: Many individuals across the country ended their lives, either because they were suspected of or found to be infected by Covid-19. Often, the individuals simply panicked, without even waiting for a final diagnosis or treatment. Others found the trauma of being quarantined unbearable, feeling stigmatised. Bafflingly, some folk alone at home, just assumed they had been infected, without any reason, such as a 75-year-old senior citizen staying in a posh locality in Pune, who hung himself in early April due to ‘corona fear’ or an elderly widow, Phagwara resident Santosh Kaur, who was convinced she had the deadly malady and killed herself so as not to infect her daughters.

Migrant mishaps: In what has to be the most tragic cause of many deaths in the last few weeks, the exodus of migrant labourers stands out as the most avoidable. After sudden suspension of public transport and railway services, thousands of stranded migrants began their marathon, cross-country marches to get to their hometowns. And inevitably, it led to horrible accidents and heart-wrenching mishaps. There is an eerie similarity in the accidents, right from the four migrants who were mowed down by a truck on the Mumbai-Ahmedabad highway, in the pre-dawn hours on way to their native villages in Rajasthan to the four coffee estate workers, who died in a forest fire at Rasingapur, Theni near the Kerala-Tamil Nadu border, while trying to reach home through the forest path because the border roads were closed, to the three men who died of extreme cold, while attempting to reach Jammu from Kashmir by a hilly route, after being refused permission to use the Jawahar tunnel. As if these fates were not bad enough, the account of Ranveer Singh, who died of exhaustion and heart attack on the Agra highway, just 80 km from his hometown of Morena, after walking over 200 km, is illustrative of how the poor have paid a terrible price for lack of government foresight.

Police action & lockdown curbs: Many hapless citizens have also fallen victim to police beatings for violations of lockdown or other restrictions of the blockade. Ambulance driver Naresh Shinde died after being hit by cops near Talegaon Phata, Maharashtra, because they thought he was ferrying passengers instead of patients, while other such incidents were reported from Uttar Pradesh, West Bengal and Madhya Pradesh. Sadly, even patients suffering from other critical illnesses, seem to have died because they couldn’t get timely help, transport or medical attention because of the severe lockdown restrictions, which wouldn’t have occurred in normal circumstances.

Alcohol withdrawal: Several reports of alcoholics dying due to acute withdrawal syndrome have emerged, especially from southern states — Kerala, Tamil Nadu, Telangana and Andhra Pradesh. Non-availability of liquor has also led to suicides from depression or death from desperate consumption of other liquids like aftershave lotion, cleaning phenyl, paint and varnish, sanitiser etc.

distress: Although not widespread, hunger deaths have been reported from states like Jharkhand, MP, Odisha, even Karnataka. Loss of income, employment and domestic distress too have proved fatal in some cases. Perhaps the most controversial, is the incident from Jehangirabad, UP, where a mother, Manju Yadav, allegedly threw her five children into the Ganga. Similarly, there have been freak incidents of murder and suicide, after quarrels among family members living cheek-by-jowl, 24x7 during the lock- down. One suspects many other incidents might well have gone unreported.

These lockdown deaths bear an uncanny resemblance to the fatalities, precipitated by demonetisation — when people died standing in queues, or committed suicide due to anxiety, distress and other related problems. One wonders whether this figure too shall mount considerably by May 3? Moreover, who’s going to keep count of the lives that might eventually be cut short, directly or indirectly because of the economic devastation that is expected to follow?