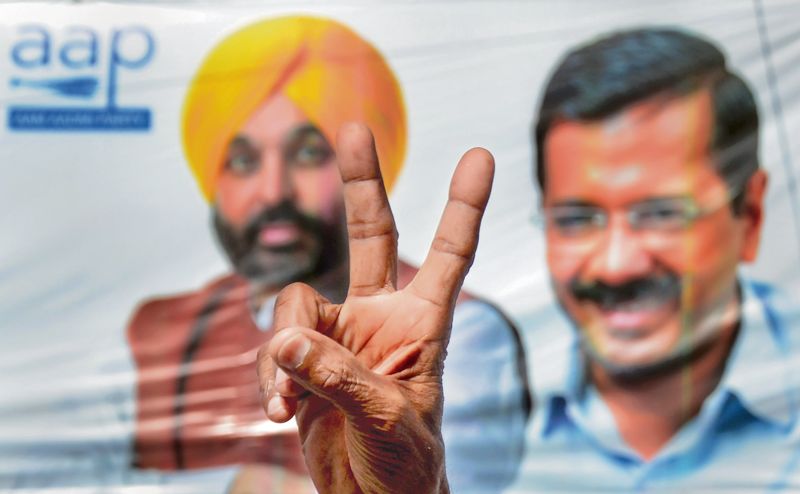 New beginning: Hindus voted along with other communities for hope and change. PTI 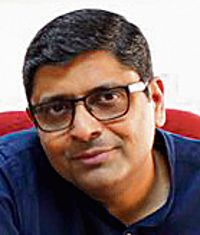 It is always heartening to talk of hope. The angry, resilient, yet ebullient people of Punjab believe that things can and will change; this, in short, explains the political deluge that has drowned a sitting Chief Minister, three former Chief Ministers, the heads of two parties and the state’s most controversial politician. This tsunami of change has to be credited entirely to Delhi Chief Minister Arvind Kejriwal’s meticulous planning, patience and people-connect. Bhagwant Mann was declared the CM candidate only a few weeks ahead of the polls — till then, there was just Kejriwal representing the Delhi model of governance, seeking a vote for change. The first sign of this campaign’s effectiveness was Union Territory of Chandigarh’s local body polls in December, which resulted in the AAP emerging as the single largest party, dislodging the BJP.

Kejriwal offers a national alternative as voters can break away from identity silos to get their lives improved.

The most shocking aspect of these results is how the mighty bit the dust, a lesson taught by angry voters to the feudal, tainted and rent-seeking leadership of Punjab. Among the banyan trees of political privilege that fell are five-time former CM and Punjab’s political patriarch Parkash Singh Badal, the “Maharaja” of Patiala, former CM Capt Amarinder Singh, ex-CM Rajinder Kaur Bhattal, sitting CM Charanjit Singh Channi, celebrity Punjab Congress president Navjot Singh Sidhu, Shiromani Akali Dal president and former deputy CM Sukhbir Badal, his controversial brother-in-law fighting drug cases, Bikram Singh Majithia, and his cousin and Congress’ finance minister Manpreet Badal. Most importantly, these weighty “lords” have been knocked out of the ring with a huge thud by first-timers — mobile phone repairmen, volunteers and other nobodies.

But mere free-floating anger would not have consolidated in favour of one party to cause this landslide of an election result. And this anger was not confined or focused against just the incumbent government. It was a sort of a tidal wave of anti-incumbency against the entire privileged political class. The rushing river of anger that was dammed in 2017 appears to have burst forth in 2022 to submerge the political landscape. Another factor that worked in favour of the AAP was that it became the sole beneficiary of the collective angst against the new farm laws. So, while Bharatiya Kisan Union leader Balbir Singh Rajewal lost his credibility and the polls, the anti-establishment vote that coalesced as a result of farm unions’ mobilisation went into the AAP’s kitty.

The results prove that rural Sikh farmers voted for the AAP in huge numbers, a fact further established by the decimation of the Akalis. From 15, the party’s strength has been reduced to three. Similar is the BJP’s drubbing. Despite all its dirty tricks — including Kumar Vishwas’ last-minute stab in the back — the Hindus of Punjab voted overwhelmingly for the AAP, helping the party sweep the urban seats. So, if in 2017 it was a backlash of the Hindus over unfounded fears of a Khalistani connection that defeated the AAP and made the Congress victorious on 77 seats, Kejriwal worked hard early in the campaign to allay those old apprehensions by launching the Tiranga Yatra to burnish his nationalist credentials. And it worked: the committed Hindu voter turned against the Congress and the BJP to emphatically support the AAP. Or rather, Hindus rose above sectarian interests and minority insecurities and voted along with other communities for hope and change.

That leaves the famed Dalit voters of Punjab — 32 per cent of the population. The replacement of a lazy Maharaja with an enthusiastic Dalit as CM was thought to be a masterstroke by the Congress leadership. But angry Dalit voters treated the high command’s trump card as if it was the joker in the pack. And like Sikhs and Hindus, Dalits voted against the political establishment, proving yet again that anger overrides identity in Indian politics — for there was an attempt to split the Dalit votes in favour of the BJP and the Akalis through the discredited Dera Sacha Sauda. Neither Channi's candidature nor Ram Rahim’s furlough seemed to have made any difference to the determined Dalit voter seeking revenge against corrupt tokens taken out of the cupboard at the last minute. The Enforcement Department raid seizing crores in cash from Channi’s nephew robbed him of all his “poor Dalit” sheen and Sidhu’s daily barbs against the government left Congress with nothing worth defending.

If these elections have thrown up Kejriwal as a national contender for the top post, offering a credible alternative beyond Delhi, it is because voters are breaking away from their identity silos and coalescing to get their lives improved. The same logic applies to Yogi Adityanath’s victory, however unseemly his saffron robes may appear to the liberals. The Muslim-Yadav formula, with some non-Yadav OBCs thrown in, did read like a winning combination, but popular sentiment had forgiven Yogi and the BJP for the Delta deaths, floating graves on the Ganga, the farm laws and even the Lakhimpur Kheri killings. The law and order situation, free ration, direct benefit transfers and various targeted schemes improving the people's lot seem to have caught the voter's imagination. Yet, the Samajwadi Party’s performance only shows that there is simmering anger against the incumbent, which has not yet reached the boiling point. Its leader Akhilesh Yadav may also have to get out of the caste costume to look at the new realities of a changing India, in which the political capital of identity politics may just not be enough to win elections.

The Congress’s failure as an alternative to the BJP is writ large over the results in Uttarakhand, Goa and Manipur. The party is steadily sliding into inconsequence, with its leadership refusing to re-engineer itself. In this context of a crisis of Opposition leadership steps in Kejriwal, with the amalgamation of two contemporaneously disparate political slogans of ‘Bharat Mata Ki Jai’ and ‘Inquilab Zindabad’. The 2024 contest just got hotter with Kejriwal’s promise of ‘inquilab’.