LAC tensions given the go-by : The Tribune India

LAC tensions given the go-by

Week-long plenary meetings in China take up other pressing issues 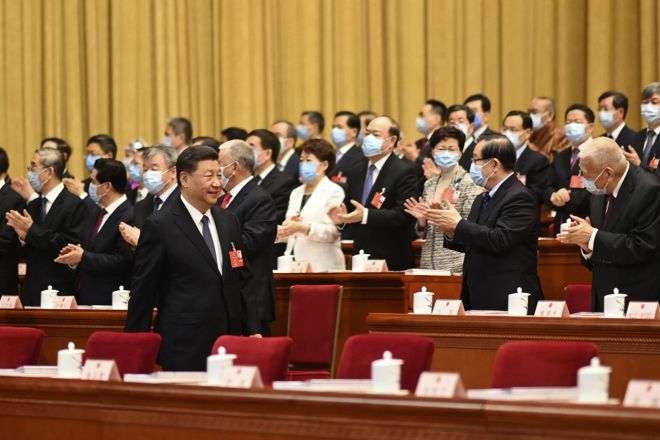 Axe falls: The dismissal of 17 NPC deputies, among them two decorated officers, has sent a chill through the PLA officer cadre.

The annual plenary meetings (May 21-28) of China’s top political advisers who comprise the Chinese People’s Political Consultative Conference (CPPCC) and Deputies to the National People’s Congress (NPC) — China’s version of a parliament — in Beijing are important events that give an insight into China’s economic situation, plans for the coming year and the thinking of its leadership. Commonly called the ‘Big Two’, the list of People’s Liberation Army (PLA) delegates attending the event and their discussions yields clues as to the Chinese Communist Party (CCP) leadership’s areas of emphasis in the military. The recently concluded 13th session of the 13th NPC and third session of the 13th CPPCC have been no different.

As per practice, President Xi Jinping, who is also chairman of the Central Military Commission (CMC) and commander-in-chief of the PLA, met the PLA deputies, and told them that ‘the world is an increasingly dangerous place’ and ‘the epidemic has brought a profound impact on the global landscape and on China’s security and development as well.’ He ordered the military to ‘think about worst-case scenarios, scale up training and battle preparedness, promptly and effectively deal with all sorts of complex situations and resolutely safeguard national sovereignty, security and development interests.’ The hike in defence budget by the lowest increment in recent years of only 6.6 per cent to $178.2 billion, elicited some negative comments. Hong Kong-based retired officer of the PLA Second Artillery, now renamed the PLA Rocket Force, and prolific commentator on China’s state-owned TV and media, Song Zhongping, said: ‘China is facing national security threats, including those taking place very nearby to China and in non-traditional security fields. Compared to these threats, China’s military expenditure was far from enough’. Global Times quoted unnamed military experts as saying, ‘In the post-pandemic period, China faces more military threats from other countries, mainly the US. With Taiwan secessionists becoming more and more rampant, reunification by force with the island of Taiwan is always on the table, adding that in this situation, increasing the defence budget must not stop’. With this as backdrop, Xi Jinping told PLA officers not to take the money for granted and that ‘every penny must be well spent to produce maximum results’. He also asked them to accelerate research and development of Covid-19 drugs and vaccines.

Interesting was that through the entire week’s deliberations of the CPPCC and NPC, none of the delegates was reported by China’s official media as having made any reference to the tensions between India and China along the Line of Actual Control (LAC). Xi Jinping did not refer to it. Chinese foreign minister Wang Yi, at his press conference on the sidelines of the NPC meeting on May 24, also made no mention of the tensions. The solitary reference to India was by Song Zhongping, who told Global Times (May 22) that ‘people should ask first, which countries are threatening China’s national security in the first place? They should ask the US, they should ask India, and some other neighbouring countries and regions.’

The other surprise development was the announcement on May 21 that 17 deputies to the NPC had been asked to resign. Among them were four senior PLA officers who were ordered to resign, including as NPC deputies, due to ‘serious violations of discipline and law’. Investigations of the four had started late last year and the list of PLA deputies to the NPC, which was finalised on May 10, omitted their names. Corruption, which is often listed as one of the charges, was not mentioned, suggesting that possibly doubts about their political reliability or factionalism could have been the factors for their dismissal.

At least two of them were decorated officers with good records. Lt Gen Rao Kuixun was an officer on the fast, upward mobile track and had received rapid promotions. He was appointed commander of a Group Army at the age of 48, becoming the youngest Group Army commander at that time. He was honoured as an ‘excellent commanding officer of the PLA army’ in 2008. He was also the first Deputy Commander and Chief of Staff of the newly formed PLA Strategic Support Force (SSF).

Maj Gen Meng Zhongkang studied at the X’ian Politics College and trained at the Shijiazhuang Army Command College, Nanjing Political College Shanghai Branch, and graduated from the National Defence University. When he resigned from service, he was Political Commissar of the Jiangsu Military Region. He was awarded ‘third-class merit’ five times.

The unexpected dismissal of the four Generals further confirms that Xi Jinping continues to closely monitor the PLA and the party for any signs of factionalism or wavering in political reliability. More importantly, announcing the dismissal of the two decorated senior officers on the eve of the NPC would have sent a chill through the PLA officer cadre, thereby enabling Xi Jinping to further tighten his grip on the PLA.