Lament for days gone by 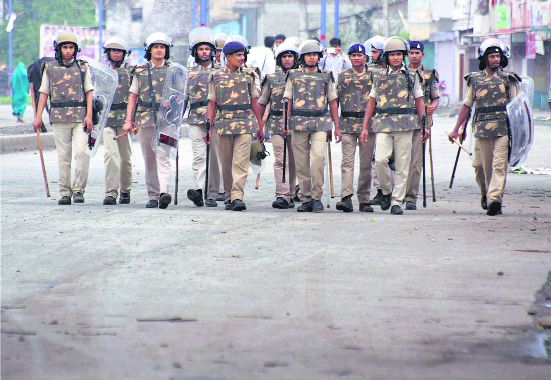 control: Politicians have been itching to run the police force for decades. PTI

SUCHARITA TILAK phoned me from New Jersey, US. She wanted to thank me for not failing to remember her father, Vasant Vinayak Nagarkar, who mentored me when I was sent to Broach (now in Gujarat) in 1955 for my practical training as an ASP. I remember her as a baby. Her father had succeeded SP Karnik, another outstanding officer of the First Regular Recruitment Batch, as the SP of Broach.

I was staying on the outskirts of the town in a bungalow owned by a Parsi resident that had been vacant for a long time. Karnik had arranged this for me. Nagarkar asked me to move in with him and his family into his allotted bungalow, as he wanted to mentor me not only in policing, but also on many ancillary qualities that made a police officer a true servant of the people. At home, and on tour, Nagarkar talked to me of many things — ‘of cabbages and kings’, as Lewis Carroll famously wrote.

To a young man who had spent his first 24 years steeped in the Goan Christian tradition, favoured by the forward castes converted four centuries earlier by the Portuguese, the Maharashtrian Chitpavan Brahmin culture was a revelation. Since the values were similar, I took to it seamlessly. Simplicity in food and clothing, but profundity of thought and ethics in behaviour guided our journey. The time spent together was short; the effect permanent.

I can never forget my old boss and mentor. I told Sucha that one of the lessons he taught me was to be courteous to elected politicians; those in power and those in Opposition. But I was not to support their attempts to place their favoured men in charge of police stations lest corruption was permitted to run amok. Rather, be ready with bag and baggage to move than allow the control of the force to go into non-professionals hands. That would enable them to administer injustice according to their party’s interests or their personal whims, and not according to the law.

How prophetic does this sound to those living in the third decade of the 21st century? In Maharashtra, where a war has been raging between the state’s Home Minister and the now disgraced Police Commissioner, the former has been placing his own favourite officials at cutting-edge positions in the field. An upright DGP, Subodh Jaiswal, preferred to shut shop and move, rather than face the ignominy of leading a force over which he had ceased to have any control, except in name!

The politicians in power have been itching to run the police force for the past three decades. If police chiefs are appointed on a groundswell of lobbying, ignoring merit and professionalism, and even more importantly, integrity, then you have a recipe for disaster. The saga of Sachin Waze is clear proof of the rot that has set in. Commissioners appointed on the basis of patronage have been signing on the dotted line, whenever asked to do so. The cosy relationship between the political boss and the police chief has worked to the detriment of the people – the end users of the service.

When I joined the IPS in 1953, the politicians were different. They respected the ICS/IAS officers and the IP/IPS officers who manned the senior levels of the administration. In return, the officers respected their political masters and ensured that no injustice was meted out to the people at large. The politicians looked at their role as one which shielded those who elected them from misuse of power by the executive. The executive was left to lead and guide the men under their command by placing proper men in the proper slots and overseeing their performance. It worked.

Alas, no longer does this happen. The politicians are more interested in placing those who have paid them or promised them freedom to dictate. The DGP knows each IPS officer personally. He knows what each is capable of. He knows his strengths and weaknesses. Today, the DGP has been reduced to a figurehead. His suggestions and written recommendations are ignored. The politicians in Maharashtra had the temerity to whisper to the press that ‘the DGP’ was interfering in transfers!

Waze was obviously reinstated against all norms of decency, morality and jurisprudence because he was expected to collect funds. He organised the planting of gelatin sticks in a car parked outside Ambani’s house. Surely, the plan was known to the officer he reported to, possibly also the political master. Waze has been reduced to a scapegoat in the entire episode.

The NIA entered the scene initially by subterfuge. A story was floated that a Muslim terror cell in the high security area of Delhi’s Tihar jail had ordered the planting of the car, the gelatin and the threat letter. Now, it has been proved (through newspaper leaks) that Waze planned every detail of the execution of the plan himself. Even the death of an associate in crime, the SUV owner, has now been pinned on him. How low can IPS officers, politicians and Mumbai City cops sink?

I remember my yesteryear bosses with love and admiration. There was no DGP those days. The force was commanded by an IGP. Kaikushro Jehangir Nanavaty was the IGP I liked the most. He was ramrod straight, not only in his physical presence, but also in his dealings with his juniors. He was as just as he was strict. His son, Rustom, was awarded the Sword of Honour at the IMA and rose to be a Northern Army Commander.

They do not make them in that mould anymore. And that is a great pity. So, also, our politicians. The likes of Yashwantrao Chavan are not visible now. And that, too, is a great pity. He was always correct in his dealings with officials, polite but never intimate. No personal wants were mentioned or favours asked. He was absorbed in his politics, of course, but did not involve government officials in this. He enquired about junior IPS officers, but with an eye on their development as servants of the people.

From the ranks of the bureaucracy, if I was asked to pick an officer I admire, it would be Burjor Paymaster, ICS, who was Home Secretary and later Chief Secretary. His sense of justice and fair play was phenomenal. He would go to the extent of protecting junior officers from predatory seniors, if such an occasion arose. It was sheer comfort for new entrants to the service to know that there was a man out there, in the ‘mantralaya’, who you could count on to protect you from injustice.

Today, we live in less genteel times. The politicians, bureaucrats and police leaders seem to have adjusted to a world where throats are routinely cut! What does a 90-plus man, dreaming of the old days, do? Grieve for his grand and great-grandchildren?