In times of Covid, we need to reflect on the deeper realities of social inequality 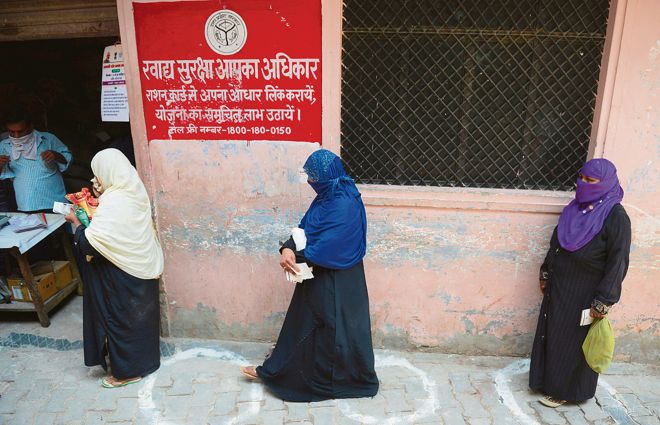 Jamaat incident: What should have been treated as a lapse on the part of a group of citizens was given a communal twist.

This is a phase in human history when the ‘fast forward’ button appears to be stuck, with images flashing by in a blur. What the picture will be when the play button returns is anyone’s guess. As Lenin observed in the context of the Russian Revolution, ‘There are decades in which nothing happens and there are weeks in which decades happen.’ But our response should not be fatalistic, accepting the eventual denouement as one over which there is no control. Human agency already is, and will remain, critical in determining the future shape of things. Our present predicament is an opportunity to reimagine democracy and rescue it from the mostly self-inflicted disabilities it has come to be associated with.

Democracy has weakened because it has strayed from its original principles of Liberty, Equality and Fraternity. Over the past half a century and more, democracies have become deeply unequal societies with large and growing wealth and income inequalities. There have always been such inequalities but never as acute as they are today. What is particularly ominous is the lack of opportunity as entrenched self-entitled elites become self-perpetuating and social mobility, a major plus point in democracies, diminishes. Globalisation has led to significant increase in wealth and reduction in levels of poverty. The wave has carried everyone to a higher level but those at the crest are far higher than those at the bottom of the wave. This inequality is not the inevitable result of globalisation. It is the failure of public policy since there has been a reluctance to ensure a more equitable distribution of benefits. This explains the rise of anti-globalisation, of ultra-nationalism and a lurch towards authoritarian politics, even in advanced democracies. India is no exception.

The pandemic has brought out in sharp relief the inequities that have hitherto lain largely invisible. The government’s well-meaning responses have revealed an inadequate awareness of the plight of our poorer citizens, for whom social distancing is impossible in their one-room tenements or congested worker dormitories. Where even clean drinking water is unavailable, how do they wash their hands with soap? Respect for human dignity is indispensable in a democracy. Being herded into shelters, dependent upon the charity of the State or of good Samaritans, is violative of the dignity of our deprived citizens who would rather earn their money to feed their families, which now they cannot. It is clear how dependent the better-off elite are on the services of this vast mass of lowly paid and badly treated under-class. Unless we come to terms with this reality, and work to create a more equal society, our democracy, and others across the world, will face extinction. We are a poor country. Our resources are limited. But we must learn to share what we have, and this will generate the productive energies of our young cohort and begin to deliver the demographic dividend we so proudly declare.

Democracy means liberty. We in India are fortunate to have a Constitution which safeguards the individual rights of citizens. The State exists for the people, not the other way around. The State may hold citizens accountable for their actions as per the law of the land, but at the same time, citizens should be enabled to hold the State accountable for its actions. In a democracy, it is the latter aspect which distinguishes it from other political dispensations. It follows from this that the State’s actions must be open to scrutiny and to challenge from its citizens. This is why the freedom of press, an independent judiciary and constitutionally empowered institutions are hallmarks of a democracy. All these elements have been weakened over the past several years in virtually all democracies, old and new. Reaffirming our faith in liberty and observing both the letter and spirit of our Constitution would help us chart a post-Covid future in which democracy attains renewed vigour.

The most important principle of democracy is fraternity, a sense of empathy among citizens, and above all, solidarity. A society fragmented on the basis of caste, creed, gender or religion lacks solidarity. Confronted by a crisis, such as the current pandemic, these divisions may become even sharper out of fear of the ‘other’. We see this in the reactions of some sections of our society to the spread of Covid-19 in a gathering of the Tablighi Jamaat. What should have been treated as a lapse on the part of a group of citizens, and there have been several, it was given a communal twist, heightening prejudice and hostility. What is gratifying is the immense contribution being made by citizen groups, health workers and the police in assisting ordinary people trapped in difficult circumstances during the pandemic. If the current crisis strengthens fraternity among our people, transcending narrow identities, democracy is safe in India. Perhaps the term social distancing is inappropriate. We should practice physical distancing, but enjoin social solidarity. We have been given a chance to step back and reflect on these deeper realities.

Liberty, Equality, Fraternity were proclaimed by the French Revolution but they found fertile soil in India because they were aligned to our own civilisational sensibilities. The future of democracy will be determined in India because of its significant weight in the geopolitical landscape. Only a democratic India can be a powerful alternative to the narrative of ascendant, even irresistible, authoritarianism that threatens to enslave minds across the world.