India will not be an engine of growth in the post-Covid-19 world if it is thinking in terms of exports and not serving as a market for manufactures and services offered by other countries. Of course, India has not yet reached the state of economic development where it can become not just an attractive destination for global investors, but also a market for global products. Atmanirbhar Bharat then becomes a strategy to maximise exports and minimise imports. 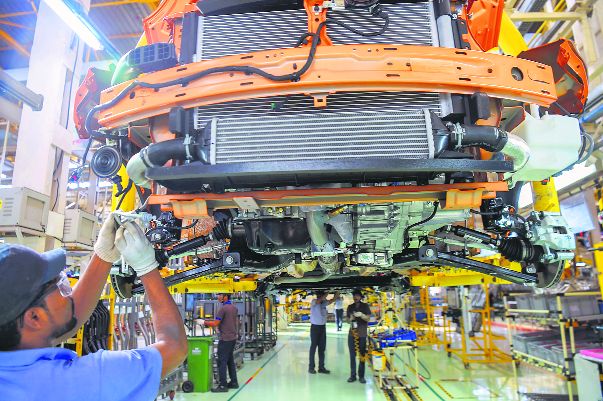 Seeking self-sufficiency: Indians have to sell as well as buy to be part of a reinvigorating world economy.

TIME and again, Prime Minister Narendra Modi and Finance Minister Nirmala Sitharaman have been forced to clarify that Atmanirbharta does not mean closing India’s door on the world. Modi had mooted the idea in his address to the nation on May 12 when he announced a Rs 20 lakh crore package to deal with the economic fallout of the Covid-19 pandemic. After he declared a nationwide lockdown in the face of the pandemic, and movement within the country and across the world was disrupted, PM Modi hit upon the idea of Atmanirbharta. He declared that the chief lesson from Covid-19 was that India has to learn to be self-sufficient: “The state of the world today teaches us that a ‘self-reliant India’(Atmanirbhar Bharat) is the only path. It is said in our scriptures — Eshah Panthah — that is, self-sufficient India.” That Sanskrit phrase is plucked from Mundaka Upanishad, and it means ‘the only path.’ It has nothing to do with India’s self-sufficiency. That is the Prime Minister’s superimposition of nationalism on that phrase which meant good deeds with a spiritual goal.

Of course, the Prime Minister had to interpret the self-sufficiency bit: “Today, the meaning of the word self-reliance has changed in the global scenario. The debate on human-centric globalisation versus economy- centralised globalisation is on. India’s fundamental thinking provides a ray of hope to the world. The culture and tradition of India speaks of self-reliance and the soul is Vasudhaiva Kutumbakam.” This was rhetoric in the best and worse sense. So, Finance Minister Sitharaman, when she gave details of the Rs 20 lakh crore package on May 13, had to explain that Atmanirbharta was “not inward-looking, not isolationist.”

But in plain economic terms, self-reliance meant making as many things as possible in India and therefore, indirectly cutting down on imports. This was evident in the details of the cabinet briefing of Information and Broadcasting Minister Prakash Javadekar on October 29 when he announced an increase in government price support for sugar mills producing ethanol. He said 10 per cent ethanol is mixed with petrol, and this would help in decreasing the import of crude oil. On November 11, briefing the media after the cabinet meeting, Sitharaman again clarified that ‘Atmanirbharta does not mean looking inward’. She emphasised that India should become ‘a manufacturing hub’ and mentioned that among the incentives to be given to the different segments in manufacturing was that of ‘specialty steel’ which was now being imported. The idea was to cut down on imports. In many ways, Atmanirbharta seems to translate into that old idea of the socialist era, import substitution.

The idea of a ‘manufacturing hub’ should revolve around meeting global demand as well as competitiveness. The government does say that indeed is the idea, but it has not been able to spell it out clearly enough. Though there is talk of making manufacturing export-oriented, the compulsion seems to be that of cutting down on the need for imports. Behind it all is the atavistic thinking that India should attract all the foreign investment it can, and that Indians should invest all they can abroad — though the riddle remains whether Indians have enough investments to make at home and abroad, and whether foreign investors will have enough to spare for India after looking at other attractive investment destinations — but India should import as little as it can. When the Prime Minister and the Finance Minister speak of placing Indian manufacturing in the global supply chain, what they seem to have in mind is India as a key supplier, as in the case of vaccines and other drugs.

India will not be an engine of growth of the global economy in the post-Covid 19 world if it is thinking in terms of exports and not serving as a market for manufactures and services offered by other countries. One of the emerging trends, as witnessed in Chinese Internet commerce platform Alibaba’s Singles’ Day sale between November 1 and 11, was the mainland Chinese buyers spending around $75 billion, buying not just Chinese goods but also foreign luxury brands. Of course, India has not yet reached the state of economic development where it can become not just an attractive destination for global investors, but also a market for global products. Atmanirbhar Bharat then becomes a strategy to maximise exports and minimise imports. Atmanirbhar Bharat then is a rather unattractive and unsophisticated strategy for leveraging the Indian economy. Even if India were able to produce all the things it needs within the country, it will make sense if Indians spend on things they make, and that Indians have the purchasing power to do so.

The ambiguity of self-reliance and self-sufficiency does not bode well for an Indian economy that aspires to be the engine of global growth. Indians have to sell as well as buy to be part of a reinvigorated world economy. Atmanirbhar Bharat is a defence gambit.