The so-called “International Community” comprising the US and its European allies, finds it more worthwhile to spend billions of dollars on the war in Ukraine than to help a democracy in Asia which is in deep distress. This, when India, a developing country, had committed $3.8 billion to meet the urgent needs of Sri Lanka. 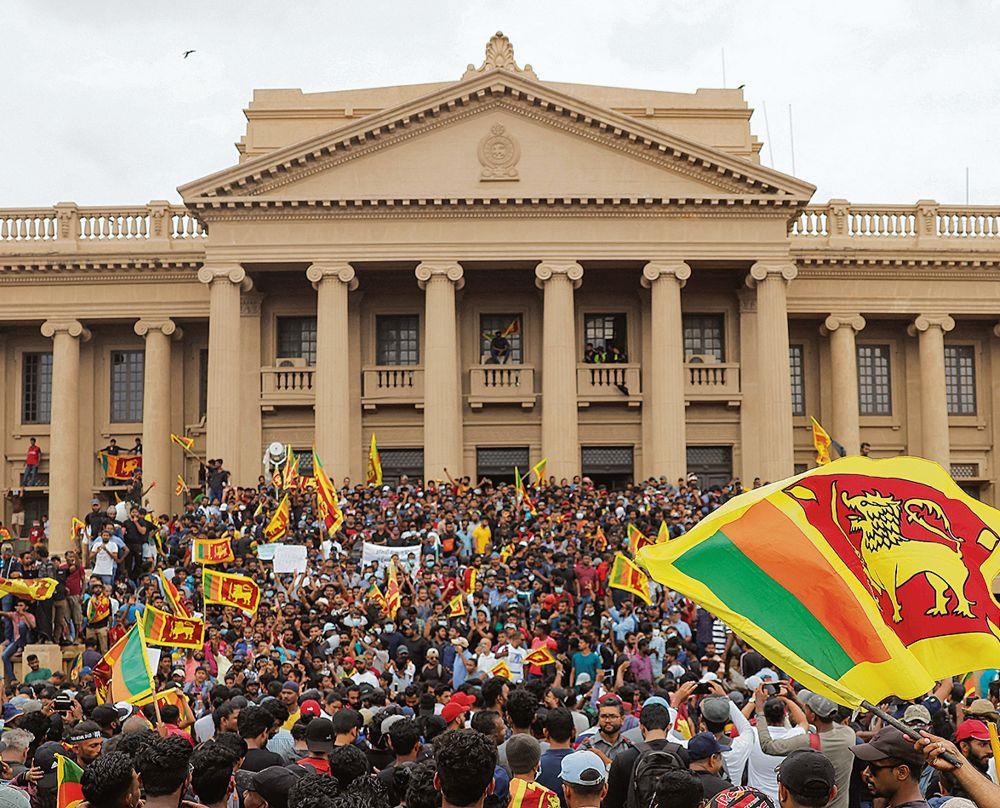 Mob fury: Sri Lankans are ready to take on those in positions of power. Reuters

Recent developments in Sri Lanka have left her people furious over the mismanagement of the country’s affairs by its duly elected government led by two brothers holding the nation’s highest offices — the patriarch and Prime Minister Mahinda Rajapaksa and his younger brother and President Gotabaya Rajapaksa.

After weeks of being torn apart by a bitter internal strife and demonstrations by people, arising from their pent-up fury, the government led by PM Mahinda was forced out of office. Shortly thereafter, President Gotabaya had to flee the country in the face of growing public anger, reinforced by massive strikes.

Immediately after Mahinda resigned as PM, President Gotabaya appointed Ranil Wickremesinghe, an astute politician who had served five terms as Prime Minister, as the successor of his elder brother and PM. An important reason for Wickremesinghe’s appointment as PM was his reputation, even amongst international financial institutions, of being a sound financial administrator. But it soon became evident that the days of the Rajapaksa family in the government were numbered.

The Rajapaksa government was also taken aback by China talking of working with international institutions like the World Bank and the IMF to deal with Sri Lanka’s economic crisis.

Serious trouble started with the onset of the pandemic as tourist arrivals virtually ceased and unemployment across the tourism sector grew. Also, Prime Minister Rajapaksa imposed a ban on the use of fertilisers for the agricultural sector without any serious technical analysis of the impact of such a measure. The tea industry, particularly, received a serious jolt and tea exports plummeted.

There are also indications that China had been miffed at being deprived of its ambitions when the Sri Lanka Government announced in February last year that India and Japan would develop the West Container Terminal at the Colombo port. This move deprived China of getting an exclusive presence in the Colombo Port Terminal.

This was followed by a pact signed on March 29 this year in the presence of India’s External Affairs Minister S Jaishankar on the Indian investment in three hybrid power projects on the Sri Lankan islands off the shores of Northern Jaffna. These projects were awarded to China last year, but withdrawn after security objections were raised by India as the islands were too close to the shores of Tamil Nadu.

These developments have followed India’s understanding with Japan for cooperating in developing countries like Sri Lanka in order to ensure that China does not take control of maritime projects in strategically placed countries across the Indian Ocean.

The world has taken note of what happened in the much-touted ‘Chinese-aided’ project for developing the port of Hambantota and an airport in southern Sri Lanka. The port is located in Mahinda’s constituency. Unable to repay China’s loans for the port and airport projects, Sri Lanka was forced to lease the port to China Port Holdings Company for 99 years in return for $1.1 billion.

Another issue which has received attention is why the self-proclaimed “International Community”, which claims to operate from a high moral pedestal, has not provided a cent to back one of the few authentic democracies in Asia in its difficult times. The answer is that the so-called “International Community”, comprising the US and its European allies, finds it more worthwhile to spend billions of dollars on the war in Ukraine than to help a democracy in Asia which is in deep distress. This, when India, a developing country, had committed $3.8 billion to meet the urgent needs of Sri Lanka.

Just when Wickremesinghe was all set to stand for election as President, the ruling Sri Lanka Podujana Party sprung a last-minute surprise by nominating a former journalist, Dullas Alahapperuma, for the post. Wickremesinghe, however, secured huge support in the parliament for his candidature, winning the endorsement of 134 of the 219 votes cast, with ruling party nominee Alahapperuma getting only 82 votes.

It was clear that even members of the ruling dispensation were confident that Wickremesinghe, who had by now held the office of Prime Minister on six occasions, was best prepared to deal with foreign governments and international financial institutions, like the IMF and the World Bank.

The crowds in Sri Lanka, however, now appear to be ready to take on those in positions of power. Just a few weeks ago, they had set fire to the personal residence of Wickremesinghe. They have since indicated that they are ready to repeat such actions to bring down Wickremesinghe. Dealing with the disillusioned and angry people of his country is the biggest challenge that Wickremesinghe confronts today.

India can derive satisfaction from the fact that its policies have been appreciated in Sri Lanka. There is appreciation of the intent of Prime Minister Modi to improve relations with Sri Lanka. Having served in Sri Lanka in the 1980s, when there were doubts about India’s intentions, External Affairs Minister Jaishankar is well aware of Sri Lanka’s predilections and suspicions. India’s High Commissioner in Colombo Gopal Baglay has quietly ensured that he enjoys trust and respect in Sri Lanka.

India needs to maintain its contacts not only in Sri Lanka, but also with the IMF, the World Bank and the Asian Development Bank to ensure that Sri Lanka’s efforts for economic recovery pick up momentum.

Sanath Jayasuriya, Sri Lanka’s explosive and popular left-handed batsman, recently noted: “India, being very helpful from the start of crisis, has given us aid. We are thankful. India is playing a big role for Sri Lanka.”