Looking for common ground on the borderline : The Tribune India

Looking for common ground on the borderline

The boundary dispute with China is not just along the LAC, east of Ladakh, but also along the Himalayan crest of India’s North East that is known as the McMahon Line. It runs from the northeast corner of Bhutan to the Tibet-India-Myanmar tri-junction. As in the past, Beijing has hinted that it could recognise the McMahon Line and settle for a swap with India, by keeping Aksai Chin for Arunachal Pradesh. 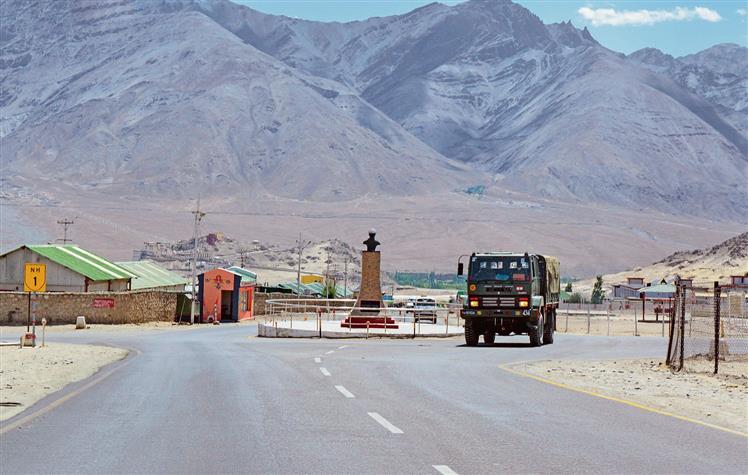 lingering dispute: China wants to revert to the LAC proposed in 1959.

After several months of the standoff on the LAC, China asserted on September 29 that Beijing would abide by a Line of Actual Control based on the boundary proposal made by Chinese Premier Chou En-Lai to India’s Prime Minister Jawaharlal Nehru on November 7, 1959. But as the LAC is only half the boundary — that separates Aksai Chin from Ladakh — China had also proposed in 1959 that troops from both sides should withdraw 20 km from the McMahon Line — the boundary line in India’s North East — from where the armies could exercise control. As in the past, Beijing has hinted that it could recognise the McMahon Line and settle for a swap with India, by keeping Aksai Chin for Arunachal Pradesh. India had rejected this idea during Nehru’s time, and then — according to informed insiders — in Indira Gandhi’s era, when Nehru loyalists felt they shouldn’t betray his legacy! And even when the LAC was finally adopted in 1993, India had insisted that it mustn’t be defined as per China’s 1959 claim line.

To understand the differing claims, some historical hindsight will help. India’s claims over Aksai Chin, as a part of Ladakh, are based on lines drawn on maps by the British from time to time to indicate the extent of their empire in the Indian sub-continent. These have been explained in detail by Alok Bansal in One Mountain Two Tigers, a compilation edited by Shakti Sinha. Until 1947, three lines defined the boundaries of Ladakh. These were the Johnson Line (1865), the Johnson-Ardagh Line (1897) and the Macartney-MacDonald Line (1899). While the Government of India regards the Johnson-Ardagh Line as its official boundary, it was assumed that in 1949, that when the People’s Republic of China came into being, China should have settled for the Macartney-MacDonald Line, which existed then.

The Johnson Line came into being a decade after the British had begun the Great Trigonometric Survey of India in 1855. The survey of the north-east corner of Ladakh, and the route from Leh to the Karakoram Pass was entrusted to WH Johnson, who was encouraged by Maharaja Gulab Singh of Jammu & Kashmir, to show the north-eastern reaches of his kingdom well beyond the Karakoram Pass. And as there was already a fort at Shahidulla, where the Maharaja’s troops and officials were stationed from 1863, the Johnson Line had included all these territories between the Karakoram Pass and the Kunlun mountains.

The British were unhappy with the ‘line’ demarcated by Johnson, but as the Chinese writ then didn’t run as far as these areas, it was apparently never presented to China. When the Maharaja’s soldiers vacated these inhospitable areas by 1866, the Chinese took control of Shahidulla. And with the Russians then exploring ways to extend their reach onto the Tibetan plateau, the British decided on a boundary line — with a few modifications to the Johnson Line — along the crest of the Kunlun mountains, north of the Yarkand River, to limit Russia’s reach. And so, in 1897, Major General Sir John Ardagh, the then Director of Military Intelligence in Delhi, marked out what came to be known as the Johnson-Ardagh Line. Since India’s independence, even though the boundary in the Aksai Chin sector is described as ‘un-demarcated’, New Delhi’s boundary claims since 1947 were based on this line.

There was also another line that was used in British maps of the region that London referred to until 1908, i.e, the Macartney-MacDonald Line. This was proposed by George Macartney, the British consul general in Kashgar (in Sinkiang, now called Xinjiang), with a border along the Karakoram mountains, aimed to limit any Russian advances into Tibet. And even though the Postal Atlas of China, published by Peking from 1917 to 1933, had shown the boundary of Aksai Chin with Tibet along the Johnson Line — that runs along the Kunlun mountains — when PRC (the People’s Republic of China) was founded in 1949, it was assumed that they’d opt for the Macartney-MacDonald Line, as their boundary. But they didn’t.

However, the boundary dispute with China is not just along the LAC, east of Ladakh, but also along the Himalayan crest of India’s North East that is known as the McMahon Line. This came about as a consequence of nine months of negotiations between the representatives of the British government in India, and the governments of Tibet and China, from October 1913 to July 1914, at the Simla Conference of 1913-14. It was to be the most decisive event in defining at least one half of the disputed boundary between India and Tibet, now China — since China occupies Tibet — known as the McMahon Line. Its proceedings — in Simla and Delhi — have been explained in detail by General JJ Singh in his book The McMahon Line: A Century of Discord.

Following his formal nomination to represent the British government at Simla, Lt Col Arthur Henry McMahon, with the rank of a ‘secretary’ in the British Government of India’s Foreign Department, McMahon was “empowered to sign any Convention, Agreement or Treaty which may be concluded at the Conference”. He had, as a young Captain, spent two years demarcating the Durand Line (that separates today’s Pakistan from Afghanistan). And even though McMahon was “moulded in the furnace of responsibility and the anvil of self-reliance, and relished the creation and laying down of boundaries”, he was unable to convince the Chinese to accept his proposals. In the end, however, he drew a line that marked out India’s northeast frontier, that came to be known as the McMahon Line (that India has steadfastly maintained is its border with China, since the 1950s). It runs from the northeast corner of Bhutan to the Tibet-India-Myanmar tri-junction. Thus, perhaps a settlement over China’s 1959 proposal, that could give Aksai Chin to China, while recognising the McMahon Line, by which India keeps Arunachal Pradesh, could be a sensible, as is where is, solution.