The Defence Minister can really make a change. Some are already visible, with defence attachés being called back recently for a conclave in Delhi and then going to DefExpo to see firsthand what Indian products they can push abroad. This was unheard of. But military diplomacy is not just about pushing indigenous industry. It’s also about building up a picture of reliability in military capability and coherence in the upper echelons of the civil-military combine. 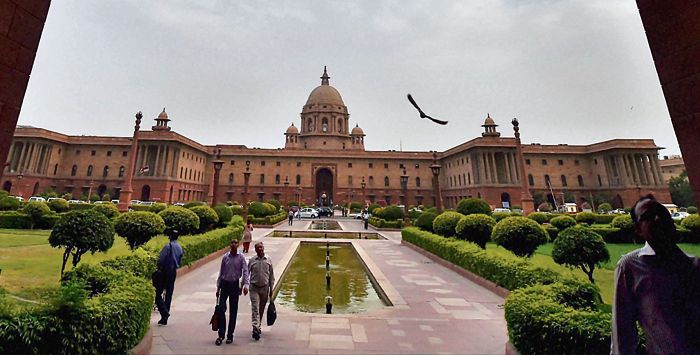 Coherence calling: South Block must look into the issue of the struggle that military officials going abroad on official business have to wage to get monetary entitlements.

A media report that the four Indian Gaganauts in Russia, for the country’s first manned space mission, Gaganyaan, have not been given their monetary entitlements and other allowances due to non-issuance of the government letter authorising these brought back memories of the not-too-happy kind. The ostensible reason for the current impasse is some ‘dispute’ between the finance and external affairs ministries about their ‘consular’ status; in the interim, ‘ISRO is making ad hoc payments for their sustenance,’ as the article puts it. The selected creme de la creme, meanwhile, sweat it out at the Yuri Gagarin Training Centre and live in a state of uncertainty while preparing for the space flight in the mere one year given to them!

My empathy for them stems from my own contrasting experiences of going abroad on official business: one, as an IAF officer proceeding on Air Force tasks, and the second as part of a Ministry of Defence delegation. The difference couldn’t have been more stark! In the former, the government authorisation typically came at 6 pm, with the flight departure due at 11 pm the same night! In the latter case, it was in one’s hand a full week before departure, leaving enough time for preparation.

For the IAF missions, one would have to struggle for getting entitlements endorsed on the authority letter as they were required for the task for which one was detailed. In the other, everything was on a platter. For example, for IAF aircraft that ferries abroad, the Captain is required to be in touch with the Air Headquarters for many issues, including for emergency situations like aircraft unserviceability. It was a herculean task getting the clause for cellphones included, for invariably, the argument was that embassy/hotel facilities could be used. What if the aircraft diverted? What if it was a Sunday when contact was to be done? Grudgingly, some amount would be allotted.

When the IAF team went to the US for training on the multi-million dollar C-130J Super Hercules, its authorisation letter did not specifically cover road movement within the airbase; they couldn’t hire a taxi! Despite having pointed out that the aircrew were walking, lugging their flying gear in a foreign base and that it was not good for India’s image, besides being tiring before flying, the finance was stuck on the point that the hosts should provide transport. All our entreaties and arguments fell on deaf ears.

However, in the MoD mission that I went along with five other joint secretary-level officers of the MoD and MEA, the authority letter stated, ‘Since officers are of the level of JS, each would be authorised a separate car and a cellphone for official use.’ On landing, this was indeed the case and one felt proud moving around in the environs of the United Nations as a representative of a country that looked after its officials. How one wished this was for every armed force’s officer representing India abroad!

The unfortunate fact is that funding for armed forces officers going on most courses of instruction to advanced (western) nations is accepted from the host country. Thus, when I left for my trip to the US for the staff course, the authorisation from the Indian government was zero. One had to subsist on what the US government gave. It was not a good feeling waiting for the cheque every first of the month along with officers from countries that were truly poor. One always wondered why the Indian government had such an attitude to people who were diplomats in their own right. At present, however, it is understood that some, though not the complete, financial authorisation is given; the major amount is still from the host country. Why?

Way back in the late 1980s, when I went to France for the test pilot’s course, there were two DRDO scientists from different labs with us. They were training to be test engineers for the LCA programme. As the senior of the Indian delegation, I was called one day by the commandant and requested to ‘ask the Indian government for tuition fees for the two that had been pending for long.’

Apparently, there was a tussle between the two parent labs and the Aeronautical Development Agency (that was developing the light combat aircraft) as to who would fund the trip, resulting in a payment default. In the office of the commandant, I did not know where to hide. India’s image had come down a notch due to inter-departmental wrangling back home.

Is this situation prevalent only for junior officers? Unfortunately, the answer is a big no. One knows of C-in-Cs returning from Delhi in disgust as their government letter was held up somewhere in South Block. The saga of the Sarang aerobatic team’s aborted attempt to showcase the Indian defence industry in the Singapore air show this year is still fresh in one’s mind — the air show authorities tweeted that, ‘we can no longer accommodate…Sarangs...as we have not received official confirmation of its participation.’

The reason was simply, that the file was stuck somewhere — India’s image was sacrificed at the altar of an incomplete grasp of the bigger stakes involved.

Will things change with the setting up of the Department of Military Affairs (DMA)? Well, one really hopes so as there would (should) be a better understanding of requirements military. However, the DMA can only recommend, as the final powers would still be with finance and the minister’s office.

The Defence Minister can really make a change. Some are already visible, with defence attachés being called back recently for a conclave in Delhi and then going to DefExpo to see firsthand what Indian products they can push abroad. This was unheard of in yesteryear. But military diplomacy is not just about pushing indigenous industry. It’s also about building up a picture of reliability in not only military capability but also coherence in the upper echelons of the civil-military combine.

Coherence is obviously a casualty in the Gaganaut story, and points to straitjacketing in the bureaucracy that does not see the bigger picture, despite the programme being pushed by the Prime Minister himself. If this is not internal sabotage, inadvertent it may well be, what else can one call it? The highlighting of the Gaganauts’ saga (and the Sarang’s too) should serve as an eyeopener for officials to see the bigger picture of national interests. It cannot be anyone’s case that rules should be bucked, but it is also time that a wannabe $5-trillion economy looks after its military diplomats, in a better way. In the final analysis, India would be the winner.