MSP must help farmers get out of debt : The Tribune India

MSP must help farmers get out of debt

It would appear that the arhtiyas are the problem. But the real reason why these traders and commission agents have flourished is because of the farmer’s need for finance. The institutional banking system has failed small farmers and high input costs have pushed them into the arms of the local trader-cum-moneylender. One could argue that big corporates will solve this problem, but if the organised private sector was great, what stopped private banks from entering the space? 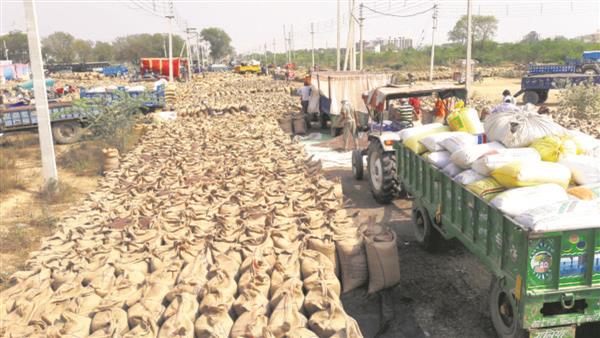 Kisan Jam: The Central government is in a bind over farm laws.

There are about 11 crore farming households in India. Of these, 67 per cent own less than one hectare of land. What does that really mean in terms of farm income? One hectare produces about 50 quintals of wheat in Punjab, but it would yield only about 35 quintals in the badly irrigated zones in Uttar Pradesh. At today’s MSP rates, that means a Punjab farmer would make about Rs 1 lakh per hectare in the wheat-producing season, while a farmer from the arid-zones of UP would end up with Rs 70,000.

Now, we need to remove their costs to get the profit they would make per hectare. Ironically, the comprehensive cost of producing wheat — as calculated by the government — is lower in Punjab than what it is in UP. So, the Punjab farmer would earn a profit of about Rs 35,000 from a hectare of wheat, while the UP farmer would make only about Rs 15,000.

Remember, this is the entire household’s income from agriculture over six months. So, a farming family with less than one hectare of land in Punjab will make just about Rs 6,000 per month, while the small farming household in UP will get a monthly income of just Rs 1,250.

Even that is only if the farmers manage to get the minimum support price (MSP) that the government has announced. As the Shanta Kumar Committee reported in 2015, only about 5.8% of agricultural households in India were able to access APMC mandis and get MSP for their produce. Sixteen years ago, the National Commission for Agriculture had recommended that there should be a regulated mandi for every 80 square km, but as of 2017, the national average was one mandi per 434 square km. Even a well-covered state like Punjab has one mandi per 118 square km.

This means farmers in most states are entirely at the mercy of local private traders or arhtiyas. In fact, even in Punjab and Haryana, where farmers take most of their produce to the APMC mandis, arhtiyas have a massive role in agricultural marketing. They charge large commissions for supposedly helping farmers find buyers, even when farmers take their crop to the mandis on their own, offload them and government procurers are already present to buy the produce.

The Modi government’s new farm bills are supposedly meant to break this iron-grip of the traders and commission agents. By allowing farmers to sell outside the APMC mandis, the government intends to introduce competition amongst traders and help farmers get better prices.

This is sheer wishful thinking that is based on a fundamental — perhaps deliberate — misunderstanding of how the farm economy works in India.

As farming has become mechanised and heavily dependent on high-yield variety of seeds, heavy fertiliser and pesticide use, input costs in agriculture have risen dramatically. Before the green revolution, when farming was largely dependent on local seeds variants and natural fertilisers, lot of agricultural operations existed outside the sphere of market transactions. Modern farming techniques increased the dependence on the market and monetised agriculture.

These processes — high input costs and monetisation — have made the farmer dependent on credit right from the beginning of the agricultural season. When India’s banks were nationalised, 51 years ago, one of the objectives was to increase farm credit. Till this day, small farmers find it difficult to get credit from the organised banking system. An RBI study last year said that 28 per cent of agricultural credit is still provided by the moneylenders, traders and relatives. When it comes to small farmers, nearly 60 per cent have no access to bank loans.

It is here that the local traders enter the picture. They are the key source of loans for small farmers. They give it immediately and without any collateral. That is why they not only charge high interest rates, but also tie the farmers to an entire web of obligations. A 2014 study by Sukhpal Singh of the Punjab Agricultural University gives us a clear picture of how this system works, by making farmers dependent on all input purchases from the arhtiyas and their associates. The study showed that arhtiyas and their associates supplied 77 per cent of seeds, 12 per cent of fertilisers, 95 per cent of pesticides, 98 per cent of fuel and lubricants and all of the animal feed that was bought by the farmers. The arhtiyas supplied over 70 per cent of all inputs bought by farmers.

As part of the loan agreement, farmers were also made to buy household consumption items from these arhtiyas and their associates. The study showed that over 31 per cent of all domestic goods bought by farmers were supplied by shops owned by arhtiyas or by traders connected to them. Finally, farmers had to sell their product through these arhtiyas and they were paid only after the traders had deducted the loans they had extended. It would appear that the arhtiyas are the problem. But the real reason these traders and commission agents have flourished is because of the farmer’s need for finance. The institutional banking system has failed small farmers and high input costs have pushed them into the arms of the local trader-cum-moneylender.

One could argue that big corporates will solve this problem by not just providing capital, but also making inputs cheaper through backward linkages with suppliers and bringing in efficiencies of scale. However, if the organised private sector was so great, what stopped big private banks from entering the space and providing easy credit to small farmers? Why has the government not even pushed public sector banks to break this control over finance that gives immense power to local arhtiyas?

It beggars belief that a smart politician like PM Modi doesn’t know this. PM-Kisaan and various interest-subvention schemes are an acknowledgement that the real problem that ties farmers to arhtiyas is that the MSPs don’t give them enough earnings to get out of their perpetual state of indebtedness. The answer to the kisan’s problems is higher MSP that gives 50 per cent more than the ‘comprehensive’ cost of production, subsidised inputs, public investment in rural infrastructure, more mandis across the country, and easy credit from institutional sources.

The Modi government’s decision to let corporates solve India’s agricultural problems is a political choice determined by its own vote calculations. But that is an entirely different story, that I will tell another day.