China wields direct as well as indirect influence with various stakeholders in Myanmar. On Rakhine, China was quick to object to the internationalisation of the crisis. Immediately after the Rohingya crisis in 2017 that had drawn the attention of the global community, it had attempted to mediate between Bangladesh and Myanmar on the repatriation of Rohingyas, though the process remains practically stalled. 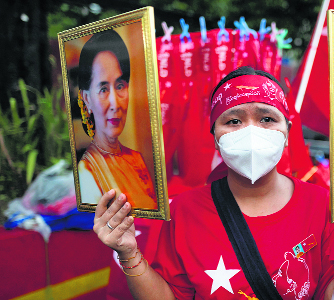 Sign of resistance: During its first term, Aung San Suu Kyi-led National League for Democracy resisted the previous policy of giving the Chinese a blank cheque.

THE recently concluded elections in Myanmar, which lies on the strategic crossroads of South Asia and South-East Asia and between the world’s most populous countries China and India, resulted in the re-election of Aung San Suu Kyi-led National League for Democracy (NLD).

The first term of the NLD left the country even more divided than before. Apart from the military, majoritarian populism counts as one of the main impediments to creating an inclusive, peaceful and united Myanmar. In a carry-over from its first term, three main domestic challenges will continue to sap the political and administrative reserves of the NLD: weeding out the military from civilian structures; amicable resolution of the Rohingya crisis; and addressing the issue of national reconciliation with ethnic minorities. However, a lesser discussed challenge is China’s overbearing influence on the country. Ultimately, some of the domestic challenges are directly or indirectly linked with this reality.

Early this year, Myanmar’s Senior General Min Aung Hlaing triggered a controversy by saying in an interview that the terrorist organisations active in his country were backed by ‘strong forces’. In the interview, Hlaing didn’t name any country, although some reports suggest that he was hinting at China for arming the Arakan army in Rakhine state. The statement was cleverly worded, even though Myanmar had raised the issue bilaterally with China, saying that Chinese weaponry was circulating among various insurgent ethnic groups in Myanmar. Some reports indicated that Chinese weaponry reached Myanmar through neighbouring countries like Laos. China is also the only qualitative arms supply lifeline for the Myanmar military, better known as the Tatmadaw.

The Sino-Myanmar boundary stretches for 1,358 miles. Historically, China is sensitive to any other country playing any kind of facilitatory role, particularly in the ongoing peace process in the north, a territory that adjoins China. On the other hand, China wields direct as well as indirect influence with various stakeholders in Myanmar. China and its provinces adjoining Myanmar, such as Yunnan, have parallel linkages with multiple stakeholders in Myanmar, including the leadership of ethnic minorities. Even on Rakhine, China was quick to object to the internationalisation of the crisis. Immediately after the Rohingya crisis in 2017 that had drawn the attention of the international community, it had attempted to mediate between Bangladesh and Myanmar on the repatriation of Rohingyas, though the process remains practically stalled.

Even within the structural constraints and renewed dependence on China to protect Myanmar at multilateral forums in the midst of the Rohingya crisis, the NLD, in its first term, resisted the previous policy of giving the Chinese a blank cheque. On the Belt and Road Initiative (BRI), financial and technical scrutiny of the projects continue to avoid debt traps in the future. Aung San Suu Kyi did not relent in spite of China’s consistent attempts to allow the construction of Myitsone dam in the Kachin area which was called off in August 2011 following concerns over massive dislocation of human settlements and potential ecological costs. She actively engaged with Japan, Singapore and South Korea that continued to pump in FDI in urban and rural sectors.

In this context, Myanmar’s relationship with India in the coming years becomes important due to the logic of geography, south-south cooperation and potential complementarities. Myanmar shares a 912-mile border with India. India is building the Kaladan project. The multi-modal transit transport project will lessen the distance between Kolkata and Sitwe, the capital of Rakhine, and provide another link to India’s Northeast in addition to the Siliguri corridor. Apart from continuing various economic projects with India, particularly in Rakhine state, the Myanmar military maintained close linkages with the Indian security establishment to assuage the latter’s security concerns in the Northeast. India recently announced to sell a Soviet-era Kilo-class submarine to Myanmar and open a high-tech IT centre at Myitkyina in the Kachin area, which adjoins China.

However, while charting any strategy on Myanmar, one has to factor in the present Asian realities where excluding China is not a wise economic option for many countries. This is due to the vast market, existing supply chains and manufacturing capabilities that take years to build. China is one of the leading members of the recently signed Regional Comprehensive Economic Partnership (RCEP). The signatories include 10 ASEAN countries, including Myanmar and China’s north-east Asian neighbours Japan and South Korea. In the past, some of these countries haven’t shied away from expressing reservations over China’s hegemonistic designs. RCEP member states will have to abolish tariffs on 65 per cent of the trade in goods between signatories once the accord takes effect. Three ASEAN countries — Myanmar, Cambodia and Laos — will have to eliminate tariffs on 30 per cent of the trade in goods due to their development status.

Coordination among like-minded countries on Myanmar will have to account for countervailing regional realities. A cue comes from Indonesia’s diplomatic engagement with Myanmar. Through workshops, Indonesia has shared its own best practices with Myanmar’s diverse institutions in various aspects of governance, including Indonesia’s own transition to democracy and rolling back of the military. Also, a more sophisticated and predictable approach on Asia is expected from the next US administration. With no trans-Pacific Partnership and its exclusion from RCEP, the new US administration will try to recover the diminished political and economic space in the Indo-Pacific region. In an environment where there is unease about China’s military and territorial ambitions in the region, no objective Indo-Pacific strategy can ignore Myanmar and its desire to diversify its options externally.