You would say that Trudeau was ‘playing politics’ and that his remarks are really addressed to the Sikh community of Canada. So what’s the problem? After all, did not our Prime Minister undertake major political rallies in the US? In the Houston ‘Howdy Modi’ rally last year, US President Donald Trump himself participated, uncharacteristically playing second fiddle, all because he, like all democratic politicians, likes votes. 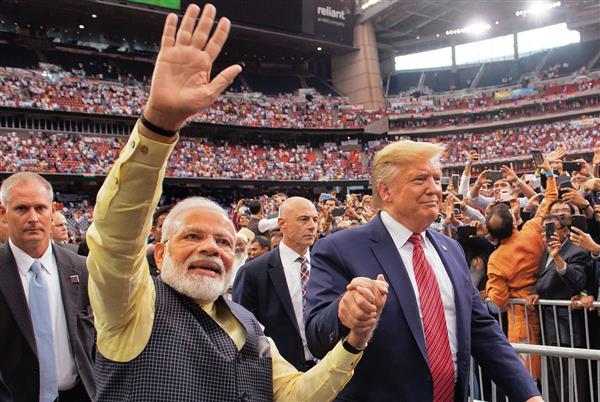 NRI card: Close relations with the US have been a key element of India’s foreign policy. AFP

South Block seems to have got its knickers in a twist over Canadian Prime Minister Justin Trudeau’s comment that “Canada will always stand up for the right of peaceful protests and human rights.”

In the post-World War II period, for a state to claim absolute sovereignty and that such statements are an unwarranted interference in its internal affairs “and will seriously damage ties”, is archaic. In a myriad of ways, all states, big and small, have shed some sovereignty. They must answer to the international law, which in our era is defined by the United Nations Charter, which is binding, and pacts like the International Covenant on Civil and Political Rights (ICPR) to which India is a signatory (and China has yet to ratify). Article 21 of the ICPR is categorical that “the right of peaceful assembly shall be recognised”.

You will legitimately argue that the UN and the international covenants are strictly for the birds, in other words, who cares about them. You would say that Trudeau was ‘playing politics’ and that his remarks are really addressed to the Sikh community of Canada. So what’s the problem? After all, did not our Prime Minister undertake two major political rallies in the US? In 2014, in the wake of his election, the massive Madison Square Garden was more of a political rally aimed at signalling to the Obama Administration the importance of the Indian-American community in the US, as well as Modi’s hold on them. The Houston ‘Howdy Modi’ rally in 2019 was only a confirmation of this. US President Donald Trump himself participated, uncharacteristically playing second fiddle, all because he, like all democratic politicians, likes votes.

In my view, there was nothing wrong in what Modi did. Close relations with the US have been a key element of India’s foreign policy, especially since the gap in the comprehensive national power of India and China has been widening. Playing the NRI card was a shrewd move in view of the fact that India had a few other equities with which to get the US attention.

It is always easy to rally opinion in a country in defence of national sovereignty, but under the international law, this cannot be used as an excuse to abuse the rights of citizens, or cause injury to the global commons. Anyone arguing that would end up justifying the Chinese policy of repression in Xinjiang, or for that matter, the US which despite being a major global polluter, has walked out of the Paris Climate Change Agreement. Likewise, there is a need to understand that while the rights of national sovereignty are an important element in international relations, in the ultimate analysis, they must stem from the ‘sovereignty’ of the individual rights of citizens — the right to life, the freedom of religion, freedom of speech, freedom of assembly, due process and fair trial. An argument that the rights of national sovereignty trump individual rights is a slippery path to an authoritarian state of the Nazi or Marxist-Leninist variety.

The Trudeau statement must also be seen in a context where political protest is being vilified in India. The Shaheen Bagh protests, peaceful as they were, are being sought to be linked with the riots that took place in February in New Delhi. The farmers’ protest is being described as backed by extremists, and some social media commentary has raised questions about its funding, motives and purpose. In these circumstances, making a categorical statement on the right to peaceful protest holds a certain value. In the Islamophobic climate of the country, it was easy and politically advantageous to vilify India’s biggest minority as being ‘anti-national’ in February, but notwithstanding the ‘Khalistani’ allegation, the trick is not working in the case of the Punjabi farmers who have landed at the gates of Delhi and have now received widespread support for their massive, but peaceful protest, both in India and abroad.

New Delhi has become uncommonly sensitive to protests. There is a whole theory spun out by the people who advise the Union Home Ministry, that all collective protests must be organised by some person or party. People by themselves are incapable of mounting a mass protest. There has to be an organisation, someone must be providing transportation, food and facilities and so on. All that is true, but from there to assume that those who are doing so are ‘anti- national’, is a big leap.

The farmers’ protest should actually be a salutary experience. It’s quite open. The Intelligence Bureau, no doubt, has its agents scouring the gatherings, looking for conspiracies. Those organising the logistics, food and medical care for the protesters are known, they have appeared in the pages of newspapers and on TV. Try as it might, the government has been unable to join the dots to claim that this is some kind of a conspiracy, funded from abroad, as it is attempting to do in the case of the anti-CAA protests.

No doubt, Trudeau is looking for votes in the fairly innocuous stand he is taking. All he has done is to stand for the right of peaceful protests. The Punjabis are a significant minority in Canada, evidenced by the fact that their Defence Minister Harjit Singh Sajjan is a Sikh. In the UK, the Home and Finance Ministers are both of Indian origin, and so it is not surprising that a number of MPs have called on their government to take up the issue with New Delhi on the farm laws. At least Canada and the UK are sensitive to their minorities, unlike India which is seeing a systematic effort to marginalise and demonise its largest minority, the Muslims.