Our patriarchal society still holds women responsible for their victimisation. Around 95% of rape victims know their rapists; they are family members, friends, colleagues or boyfriends. Families prefer to silence the girl if the rapist is a family member, for fear of public shame. The victim’s silence emboldens rapists to keep perpetrating sexual crimes. Only a minuscule proportion of rape cases are reported, few of which reach the prosecution stage. 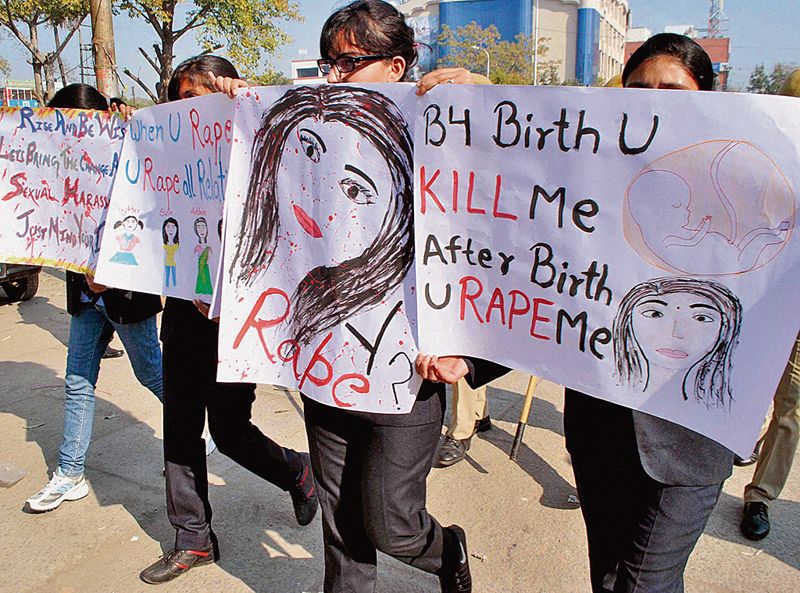 Alarming: An average of 106 rape cases are reported daily in India. PTI

THE remission of life sentence of the rapists in the Bilkis Bano case has brought the brutal gangrape into focus again, while bringing back memories of similarly horrifying incidents in Delhi, Unnao and Kathua. An average of 106 rape cases are reported daily in India.

More shocking are the facts that 99 per cent of the sexual assault cases remain unreported if marital rape is included and 85 per cent if it is not. Very few rapists are convicted. Underreporting, coupled with limited and corrupt law enforcement, allows perpetrators of sexual violence to commit crimes with little fear of punishment.

Why are women and their families so reluctant to report rape? Victim blaming and shaming keep most of the women silent. Indian patriarchal society still holds women responsible for their victimisation. Approximately 95 per cent of the rape victims know their rapists; they are family members, friends, colleagues or boyfriends.

Families prefer to silence the girl if the rapist is a family member, for fear of public shame. The girl’s mother often has no resources to support her child, even if she wants to move out of the house. What alternative does a girl have if she reports incest?

If the rapist is a senior colleague, the victim may lose her job or suffer harassment. In a large section of society, where marriage is seen as a physical and mental surrender to the husband, sex of any kind is legitimate, and there is no concept of marital rape. If the boyfriend is the rapist, the girl may be in a surreptitious relationship disallowed by her parents, so guilt and fear of blame keep her silent. The victim’s silence, aimed at avoiding social shame and stigma, emboldens rapists to keep perpetrating sexual crimes. The fact that only a minuscule proportion of rape cases are reported, few of which reach the prosecution stage, assures the rapist of getting away with impunity.

The vast disparity in wealth distribution is another key factor. In a social set-up where a man’s worth is recognised by money, cars and a bungalow, a vast number of unemployed and underemployed youth are sunk in a quagmire of frustration, angst, rage and low self-esteem by constant exposure to affluent lifestyles around them. Many work as drivers, bellboys, waiters and daily labourers, living lonely lives in low-income neighbourhoods or slums, watching wealthy youngsters drive expensive cars in designer clothes and party with their girlfriends. The yawning chasm between aspiration and sordid reality causes an identity crisis that is difficult to handle.

An angry rapist, with an emasculated self-view, aims to debase and humiliate the victim through verbal and physical abuse. In a culture where the ultimate abuse is threatening to rape an adversary’s mother, sister or daughter, sex becomes a weapon of forceful possession, subjugation and anger and a way to compensate for underlying feelings of inadequacies.

Access to smartphones and the Internet gives men a peep into a make-believe world of glitz, beautiful women, ‘fun’ and an escape from the sordid reality of their lives. Pornography, which is freely available, objectifies women as ‘sex toys’. It also perpetuates the myth that women enjoy sexual innuendos and that any resistance on their part is just pretence. Bollywood movies reinforce a sick paradigm of romantic behaviour where the hero chases, teases and makes physical overtures to the girl, who, initially refusing his advances, eventually melts into his arms.

Empirical evidence shows that violence begets violence. Boys who grow up being subjected to physical or sexual violence by dominating men at home or outside or those who have watched their fathers abuse their mothers are mentally scarred. Too young to make moral distinctions and too weak to resist the aggressor, boys may internalise violent behaviour as a mark of adult power and masculinity. An abused child develops aggressive behaviour patterns with diminished moral development and sensitivity towards others, adopting sexual violence to subjugate women and score a victory in his peer group.

A skewed sex ratio has a role to play too. ‘Surplus’ male population translates into frustrated men, who will possibly indulge in crime and violence and cause social disorder. When exposed to the urban life, males from rural or backward areas see modern and fashionably dressed women step out for work and leisure. How do they process this unexpected scenario? A ‘good’ woman dresses modestly, stays home and does not step out alone. A rapist justifies his sexual violence by saying that a woman who dresses provocatively and roams around unescorted is ‘available’ and asking for trouble. Growing women’s empowerment is in conflict with deep-rooted cultural paradigms of patriarchy, which dictates that women must be kept ‘in control’.

Gangrapes are sometimes committed by powerful people to punish and teach a lesson to women or their families who do not toe the line. Gangrapes of women belonging to minority groups and communities low in social hierarchy have been committed to humiliate and show the community its place, such as the Bilkis Bano and Bhanwari Devi cases. The helplessness of such communities and the limited reach of law and order agencies embolden the violators.

Deprivation leads to depravity. Poverty, exposure to childhood violence and the absence of a meaningful social and personal life make some men resort to sexual violence to vent their rage.

Economically well-off rapists may be violent out of a sense of patriarchy or entitlement or suffer from damaged self-esteem or insecurities of their own. The alarming statistics must awaken us to the need for a stringent law and order setup for the follow-up of rape cases and enforcement of women’s anti-harassment laws in workplaces and educational institutes. More than anything else, we need to change the social perspective regarding rape. A woman is the victim; she does not invite rape and does not deserve shaming and blaming.