Neutrality of CAPFs should not be compromised

All personnel of the CAPFs are considered to be on deputation to the Election Commission of India (ECI) when they are engaged in the smooth conduct of elections. ECI officials brief all commanders of the CAPFs about the way they are to conduct the polls and the rules that need to be strictly adhered to. These commanders then brief all their personnel and depute them to various polling booths. 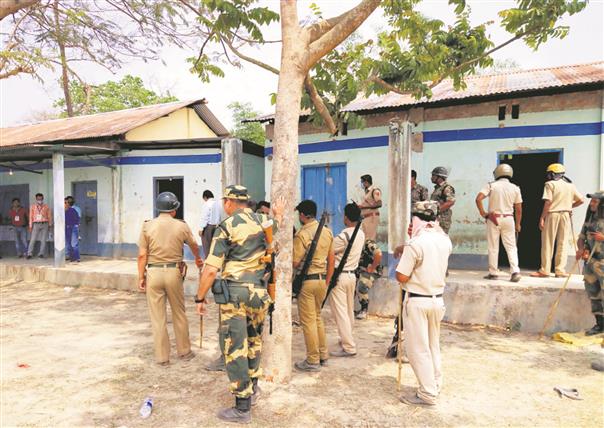 Duty-Bound: The CAPFs must not be dragged into political controversies. PTI

THE death of four young men at a polling booth in Sitalkuchi area of Cooch Behar during the fourth phase of polling in West Bengal on April 10 has led to allegations that the Central Industrial Security Force (CISF) personnel were responsible for the incident. Chief Minister Mamata Banerjee has accused Union Home Minister Amit Shah of using the Central Armed Police Forces (CAPFs) that comprise the Central Reserve Police Force (CRPF), Border Security Force (BSF), Sashastra Seema Bal (SSB), Indo-Tibetan Border Police (ITBP) and the CISF to intimidate the voters to vote for the candidates of a particular party.

Quite a few versions are floating around about the firing incident at Sitalkuchi, one of which is that a 14-year-old boy who had accompanied his mother to the polling booth, fainted outside while his mother was inside the booth. When other women around him were trying to revive him, some CISF personnel went to them and offered to take him to the hospital which later led to a fracas between them. According to another version, word had gone around that the boy was assaulted by the CISF men which irked the villagers and they tried to attack the CISF personnel. In the melee, some villagers attempted to snatch the weapons of the CISF personnel who had to open fire in ‘self-defence’.

During basic training, it is hammered into every paramilitary trainee’s brain that his service weapon has to be guarded at all times because it will protect his life as long as he is in possession of it. Hence, any attempt to snatch the weapon will be fully resisted and drive the person to retaliate by firing — not just to safeguard the weapon in his possession, but also to disperse the unruly mob that could have endangered his life and that of his colleagues.

Having served in the CRPF for nearly four decades and having been involved in the conduct of elections all over the country several times, this writer never once came across any such instance where the CAPF personnel intimidated or asked any voter to vote for any particular party. The neutrality of the CAPF was never questioned. On the other hand, almost all political parties demanded the deployment of CAPFs, more particularly the CRPF, which has earned the reputation of being fair and impartial in the conduct of elections in every corner of the country.

The very composition of the sections, platoons, companies and battalions is such that every section would normally have personnel from different states and religions and thereby every battalion is a mini-India in itself with no political affiliations. Such a mix of personnel would by itself hinder any person from showing any bias or leaning towards any political party.

All personnel of the CAPFs are considered to be on deputation to the Election Commission of India (ECI) when they are engaged in the smooth conduct of the elections. Prior to polling, senior officials of the ECI brief all commanders of the CAPFs about the way they are to perform their job and the rules that need to be strictly adhered to, though a majority of them are well conversant with the way the polling booths are to be secured. These commanders then brief all their personnel and depute them to various booths.

The heavy dependence of the ECI on the CAPF can be gauged from the fact that a senior CRPF official is designated as the senior coordinator for elections in all states with a control room in New Delhi. Not just the movement of CAPFs from different corners of the country to the states where elections are to be held are coordinated, even the deployment is coordinated with the nodal officers designated in every state.

In recent years, allegations have been levelled against individuals from the CAPFs of playing a partisan role and intimidating voters, but these are exceptions. Exemplary punitive action is called for against such elements who attempt to thwart the democratic process of holding free and fair elections and dent the image of the CAPFs.

The nature of duties related to elections are too arduous and hectic and call for utmost perseverance and dedication of a high order. Moving from place to place for weeks after weeks to conduct elections saps one’s energy. It speaks volumes of their grit and determination that they remain composed and go about their duties faithfully, shouldering the onerous responsibility of guarding the vital element of our democracy — the elections.

Between 2013 and 2017, 13 CRPF personnel lost their lives while on election-related duties. They trudge miles after miles to reach the remotest villages in far off places so that no eligible voter is deprived of his right to exercise his franchise. In states affected by Left wing extremism or insurgency and terrorism, they ensure safe conduct of polling at grave risk to their lives.

The Central Armed Police Forces have so far been apolitical and their neutrality is their asset, on which they pride themselves. Let us not pull them into the vortex of politics, lest our democratic values get compromised.

18 hours ago
8
Punjab Assembly session: On the sidelines