The more substantive strand from Gen Rawat’s tenure is the dismay created when he made an off-the-cuff remark about the Air Force and some less than positive observations about the Navy. This went against the ethos of the inter-service synergy that the CDS was expected to usher in and Gen Chauhan will have to address this matter with empathetic persuasiveness. 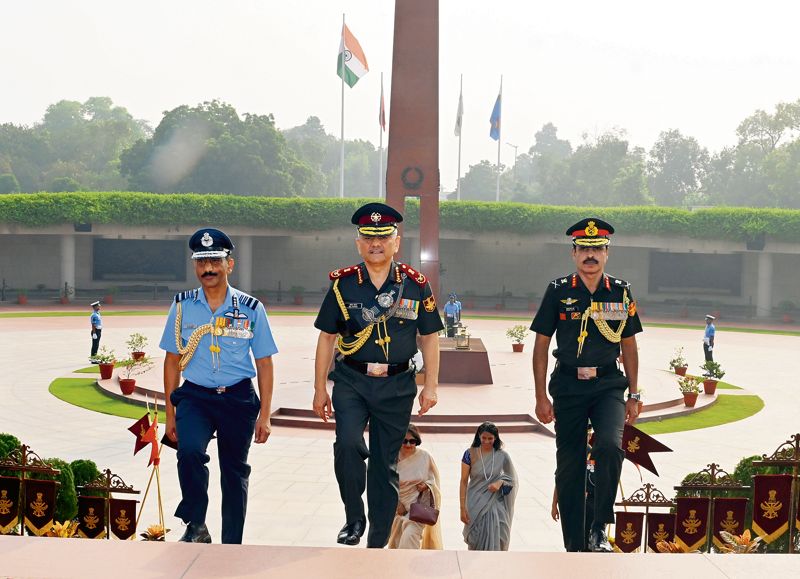 DISTINCTIVE CHALLENGE: The new CDS, General Anil Chauhan (centre), will have to draw a line in relation to the military-political overlap. ANI

ASSUMING charge as the country’s second Chief of Defence Staff (CDS), Lt Gen Anil Chauhan (retd) assured his fauji brethren: “I will try to fulfil the expectations from the three defence forces as the CDS. We will tackle all challenges and difficulties together.”

This statement acquires greater salience on Air Force Day today since nurturing ‘jointness’ or higher levels of inter-service synergy was a major objective when the post of the CDS was announced by Prime Minister Narendra Modi in August 2019.

Given the many national security challenges that need to be addressed, some immediate ones such as the Ladakh standoff and others that are complex, Gen Chauhan will have a wide spectrum ‘must-do’ list. This will not only seek to take forward the work in progress initiated by his predecessor, General Bipin Rawat (whose tenure was tragically cut short in a helicopter crash in December last), but also factor in the multi-dimensional turbulence engendered by the war in Ukraine that began in February.

The CDS has an anomalous institutional profile; in that he is the first among equals along with the three service chiefs as a four-star General. Concurrently, he is Secretary to the Government of India in the Ministry of Defence and Principal Adviser to the Defence Minster on inter-service issues. This is a daunting combination of roles and each hat has its own distinctive challenge for the new incumbent.

Chauhan retired as a three-star Army General and his last appointment was that of an Army commander, Eastern Command in Kolkata.

In an unprecedented move, the government has recalled and re-commissioned a retired officer in a higher rank with much greater civil-military responsibilities. A four-star service chief has a higher defence management exposure that is very different from that of an Army GOC-in-C (and equivalent) and the new CDS will be expected to provide the ‘firm hand on the tiller’ as the Chairman of the Chiefs of Staff Committee, without the benefit of having been a chief. While Gen Chauhan’s professional acumen is commendable, the enormity of what he has been tasked to shoulder is to be noted.

Presumably, an objective review of Gen Rawat’s experience must have been undertaken by Gen Chauhan when he was serving as a military adviser to the National Security Adviser (NSA). However, some issues related to the office of the CDS that attracted comment during the Rawat tenure merit recall and an objective in-house review by the new incumbent may have a bearing on the evolution of this high office with its onerous responsibilities.

The first is related to ceremonial matters. It may be recalled that Gen Rawat assumed office as the CDS in January 2020 in the same rank that he held as the Army Chief — namely that of a four-star General. However, Rawat assumed office with a newly designed rank badge that was incongruous and raised eyebrows — for the CDS was not envisaged as a rank, but a post.

The grapevine has it that this new rank badge was mooted by Gen Rawat when he was the Army Chief and his name was announced as the first CDS. At the time, his peers did not agree to this proposal for it would not have been possible for an Admiral or an Air Chief Marshal to wear such a badge! Some retired senior Army officers had also conveyed their unease with this ‘new badge’ to Gen Rawat, but the horse had bolted and this sagacious counsel was not taken.

Gen Chauhan must have been aware of the flutter that the rank-badge issue had caused and the import of such symbolism in the military. This is a purely military ceremonial matter and the CDS could decide how best to arrive at appropriate in-house closure.

The more substantive strand from Gen Rawat’s tenure is the dismay created when he made an off-the-cuff remark about the Air Force and some less than positive observations about the Navy. This went against the ethos of the inter-service synergy that the CDS was expected to usher in and Gen Chauhan will have to address this matter with empathetic persuasiveness.

More recently, Air Chief ACM Vivek Ram Chaudhari expressed his nuanced ‘reservations’ about doctrine and structures while pursuing theatre commands when there is a paucity of air assets.

The last, but perhaps most, substantive strand is the ‘lakshman rekha’ that the new CDS will have to draw in relation to the military-political overlap.

Eyebrows had been raised when Gen Rawat chose not to attend the Navy Day event in December 2020 and instead participated in a programme with ‘overt religious overtones’ in the company of UP Chief Minister Yogi Adityanath.

The fact that Gen Chauhan was handpicked by the Modi government as the CDS and that the existing rules were tweaked to enable this appointment have attracted notice. While it is the prerogative of the government to choose its military top brass, the CDS is his own ‘sherpa’ in such sensitive matters and will have to evolve the appropriate template of rectitude and restraint to insulate the military from the prevailing socio-political churn that India is experiencing.

Whereas caste and religion have become central to the Indian politics, to its credit, the armed forces have not allowed these determinants to impact military professionalism and commitment to core democratic principles.

When Gen Rawat assumed office, former Naval Chief Admiral Arun Prakash had sagaciously advised, “The military ethos requires that he (CDS) retains his professional independence and upholds his oath of allegiance to the Constitution.” This principle is cast in stone and should remain inviolate.