MK Stalin, who earned his spurs by sweeping the 2019 Lok Sabha polls, managed to keep intact the ‘secular’ alliance he stitched in the run-up. The coalition led by the DMK includes the Congress, the Left parties, the Indian Union Muslim League and the Viduthalai Chiruthaigal Katchi, formerly known as the Dalit Panthers’ party. 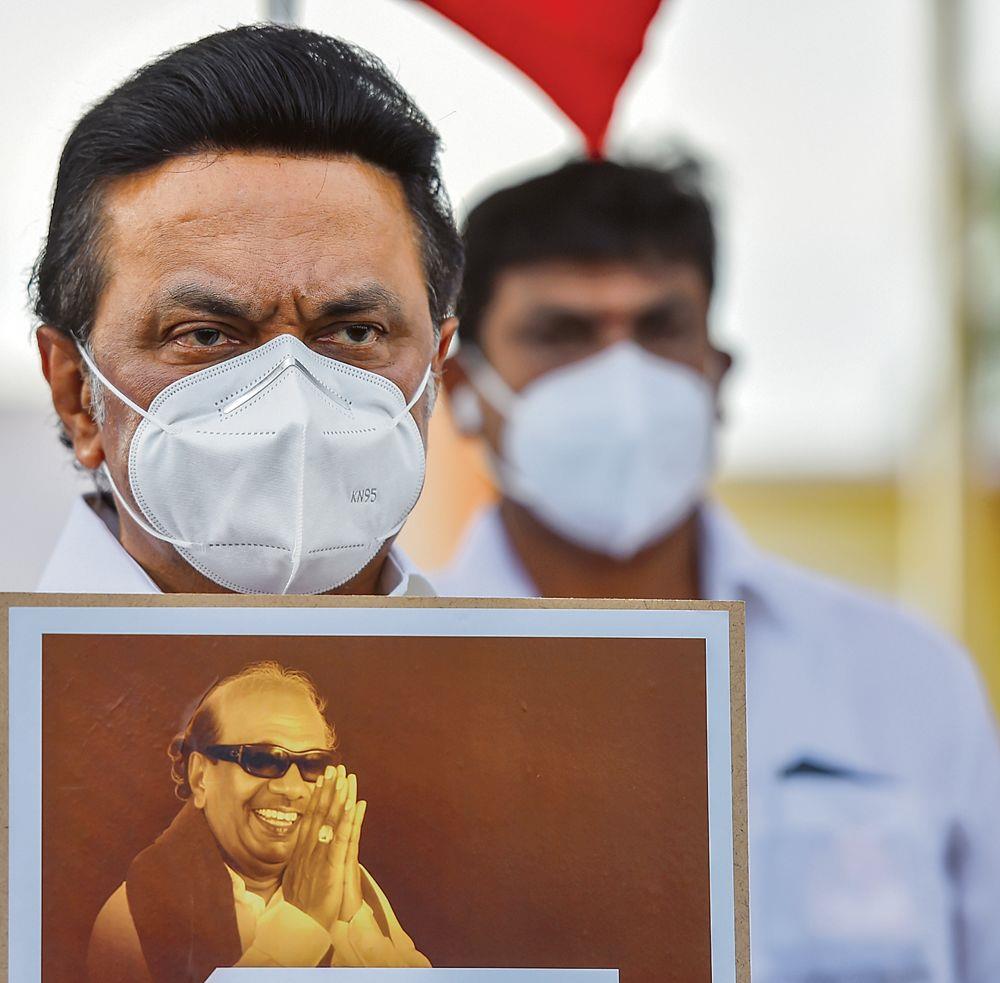 The challenger: Stalin, the anointed heir to Karunanidhi, manages a party that was once cadre-driven, but has now been reduced to a mere dynastic entity. PTI

For 53 years, Tamil Nadu politics moved in a circle around the twin offspring of the Dravidian ideology and worldview, birthed by Periyar EV Ramasamy and fine-tuned by CN Annadurai to fit into the exigencies of statecraft, a vital element of which entailed straightening out the state’s troubled relations with a Congress-ruled Centre. The two poles are the Dravida Munnetra Kazhagam (DMK) and the All India Anna Dravida Munnetra Kazhagam (AIADMK). Squeezed between the ends of a warring spectrum were offshoots of one of the Kazhagams or caste-based entities that aligned with the DMK or the AIADMK to find a place under the sun.

The Assembly elections in April-May 2021 will see the play of new elements and personas. The polls will be fought without the larger-than-life presence of M Karunanidhi (DMK) and J Jayalalithaa (AIADMK), who had the voters in thrall for decades. Their parties are bereft of leaders who can remotely match their charisma, oratory and mass appeal. The DMK, which started as a cadre-driven party, is reduced to a dynastic entity ruled by a family whose principal members are at loggerheads. MK Stalin is the anointed heir to Karunanidhi’s legacy, but his older brother, MK Alagiri, is estranged from him. Alagiri cultivated a base in southern Tamil Nadu that cannot be scoffed at. Their half-sister and Thoothukuddi MP Kanimozhi Karunanidhi nurses her own ambitions, although her remit lies in Delhi.

However, Stalin, who earned his spurs by sweeping the 2019 Lok Sabha polls, managed to keep intact the ‘secular’ alliance he stitched in the run-up. The DMK-spearheaded coalition includes the Congress, the Left parties, the Indian Union Muslim League and the Viduthalai Chiruthaigal Katchi (VCK), formerly known as the Dalit Panthers’ Party. The VCK came into being to seek a niche for the under-empowered Dalits in a polity dominated by the ‘muscular’ backward castes.

Pitted against this rainbow formation is the AIADMK that floundered for direction and stability after Jayalalithaa passed away. Closer to the elections, there are signs that under Chief Minister Edappadi Palaniswami and his deputy O Panneerselvam, the AIADMK might steady itself, but at a political cost. In November-end, after Amit Shah, Union Home Minister, visited Chennai ostensibly to survey the pre-poll scene, the AIADMK declared it will have an alliance with the BJP.

The BJP, that secured just 2.8 per cent votes in the 2016 elections and scored a duck, became visible and even sought after, following Shah’s trip. The AIADMK blew hot towards the BJP earlier when the BJP announced its plan to launch Vetrivel Yatra in Tamil Nadu with religious overtones. Its quest for regional symbols and icons took the BJP towards the calendar image of Lord Murugan, a subaltern deity who is venerated as an antipodal to the religious icons worshipped in the north. The BJP proposed to raise the war cry ‘Vetrivel Veeravel’ (victorious vel, the spear Murugan carries) in the yatra. It was stopped by the AIADMK government for being potentially ‘inflammatory’. What then compelled the AIADMK, which regarded the BJP as a communal and electoral baggage, to seek out its hand?

The Dravidian parties began as the forebears of federalism, using symbols such as the Hindi imposition and Brahmin dominance to bolster their resistance to the Centre’s sway over Tamil Nadu. Decades later, the AIADMK leaders believe that aligning with the BJP is the only way to keep their party from fragmenting. That’s not the only reason. VK Sasikala, Jayalalithaa’s confidante who is in jail, is expected to be released in January 2021. The AIADMK is afraid that if a party she could form with her nephew TTV Dinakaran becomes a reality, it could be in trouble because it would make a play for the same votes. Therefore, it believed it should lean on the BJP and use its political guile to keep the Sasikala-Dinakaran duo at bay. The prospects of the BJP teaming with the yet non-aligned parties such as the DMDK, PMK and the Tamil Maanila Congress (Moopanar) was something the AIADMK did not relish. If a partnership with the BJP meant extracting big-ticket projects from the Centre, nothing like it for the AIADMK that needs to buck anti-incumbency.

This pastiche of acronyms and players was enlivened by the entry of a phenomenon: actor Rajinikanth or ‘Thalaivar’ (supremo). Enigmatic at the best of times, Rajinikanth strung along his fans and cheerleaders for years over his political plans. He finally proclaimed he will launch a party whose name and symbol will be unveiled during the auspicious Pongal festival in January. Given Rajinikanth’s mood swings, he might change his mind again, but the BJP will ensure he will not.

The BJP, adept as a talent scout, has not identified a leader of its own in Tamil Nadu. It had a scattering of MPs and MLAs in the past in alliance with the AIADMK but has little to show for itself independently. Rajinikanth seems to be the talisman the BJP waited for. S Gurumurthy, the Chennai-based chartered accountant who was an adviser to the RSS’s Swadeshi Jagran Manch, worked from behind the scenes and quickly placed Arjuna Murthy, who helmed the Tamil Nadu BJP’s intellectual cell, as the actor’s ‘chief coordinator’.

Rajinikanth spoke a language that the BJP thought could strike a chord with voters fed up with the ‘corrupt’ and ‘family-centred’ Dravidian parties. The phrases he chose were ‘spiritual politics’, ‘honesty’ and ‘freedom from corruption’. Would a ‘spiritual’ stream click in a state that rejected theism in politics in the past and preferred to pursue religion in private and temple spaces, away from electioneering?

Doubtless, Tamil Nadu politics was anchored in filmdom as the epic successes of MG Ramachandran and Jayalalithaa proved. Lately, however, stars like Captain Vijayakanth, Vijay and Kamal Haasan scarcely made an impact. Perhaps cinema may no longer ensure a safe passage to politics. Rajinikanth could be the ultimate test.