No compromise on security

The pointer to future economic prosperity is ‘Make in India’. The Indian armed forces are a prominent stakeholder in its success. The numbers related to equipment and wherewithal of the services are huge. The making of military equipment gives a push to the industry. It also builds up a dual-use ecosystem of many smaller items, which in turn, boosts entrepreneurship and generates employment.

Imperative: Maintaining and equipping the three services with state-of-the-art and platform-centric systems is needed to deter war. PTI 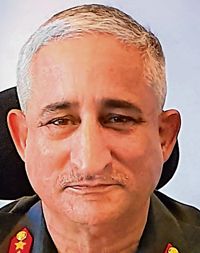 As independent India turns 75, the most important aspect of its nationhood is its territorial integrity and the safety and security of its citizens from any external threat or externally sponsored threat. At the forefront in safeguarding our country are the armed forces, supported by various other elements of state power, the prime one being the economy.

We went through four major wars within the first 24 years as an independent country and the last of these conflicts saw India liberating and facilitating the birth of a nation. A limited war was again fought successfully against Pakistani intrusions in Kargil. Virulent insurgencies, which are actually proxy wars, have been effectively combated and kept under check.

However, disputed borders and large areas with constant friction continue to impinge on our developmental goals and territorial integrity. India’s ongoing security problems are land-centric. We have unsettled and disputed borders with our two major adversaries.

Going from the east to west, there is a 3,488-km-long Line of Actual Control (LAC) with China, which is contested all along by the manufactured claims of our northern neighbour. It has well-identified disputed and sensitive areas.

Almost in continuation is the disputed boundary with Pakistan on the world’s highest battlefield at the Siachen glacier. Thereafter, is the Line of Control (LoC), stretching over 740 km through J&K.

As the international border with our western neighbour nears the Persian Gulf, we have the boundary dispute at Sir Creek in the Rann of Kutch.

Moving inwards from the borders, the Indian Army, paramilitary forces and Central police organisations have been embroiled in combating militant insurgency in J&K and the North-East, which is aided and abetted by our inimical neighbours.

Then there is a Maoist insurgency waxing and waning in the heartland states, where the Army deployment has been rightly avoided so far.

As we look ahead, there are some pressing issues which need increased focus, relative to our national security. The first one is the economy and the optimum use of the defence budget.

The major economic thrust of the government and the pointer to future economic prosperity is ‘Make in India’. The Indian armed forces are a prominent stakeholder in its success. The matrix of numbers related to equipment and wherewithal of the services is of a very large dimension. The manufacture of military equipment not only gives a boost to the defence industry, but also builds up a dual-use ecosystem of many smaller items and sub-items, which in turn, encourages entrepreneurship, generates employment and multiple other benefits. The success of ‘Make in India’ for defence equipment will lead to an enhancement of defence exports, accrue forex earnings and contribute significantly to the GDP.

The big-ticket missile export to the Philippines was a clear pointer in the direction of becoming a net exporter of defence equipment. The recently tabled report by the Ministry of Defence in Parliament has highlighted a notable decrease in India’s military equipment imports. This is primarily due to the new acquisition policies, thrust on indigenous manufacture and successive increase in items on the negative import list, giving a boost to the start-ups to work increasingly in the defence manufacturing eco-system. In this vein, very useful work is now being done in robotics and AI technologies by new small-scale entrants.

Organising the armed forces into integrated theatre commands is another subject which needs urgent attention. It directly impacts how the forces should be structured and evolved into a robust organisation that optimally harnesses the national military power.

At the outset, there is no gainsaying that to be a great power, India needs a large and modern navy with a trans-oceanic reach. The Indian Navy is a formidable force but given our emerging challenges, it definitely needs to be on a growth trajectory, adequately equipped with surface, sub-surface and aerial platforms for varying roles.

The Air Force has to possess the capability to not only guard our vast air space but also provide operational reach that can also act as an effective deterrent. The IAF is a highly professional service but its capacity needs to be enhanced, upgraded and modernised on an ongoing basis.

However, the issue of integrated force structures has to be viewed in terms of our current challenges and not as one that a superpower with expeditionary forces would see it. Our deployments beyond the Indian shores are only under the UN aegis with two brief exceptions in the past and that too in the immediate neighbourhood.

The US girdles the globe with its theatre commands and aircraft carriers and the wannabe superpower, China, has carved out its own version of such an organisation in keeping with its aspirations and perceived threats. India is neither an expansionist nation nor does it covet foreign territory or aspire to act as a global security provider on its own through the deployment of forces overseas.

The primary role of our armed forces is to deter war against the country and prosecute operations to safeguard our territorial integrity in case deterrence fails. Given the adversarial relationships with our two major neighbouring countries, it is imperative to maintain and equip the three services with state-of-the-art and platform-centric systems.

However, given the force parities and stakes involved, as long as the disputes along the LAC and LoC are managed with resolve and sagacity, the actual occurrence of a large-dimension conventional conflict can well be deterred. At worst, face-offs and intrusions could lead to local clashes, which would lie in the domain of the Army with support from the Air Force. Within these parameters, the creation of an integrated theatre command system would be well served if it leads to greater synergy and optimisation while fulfilling this role.

A concurrent aspect has to be economisation of effort and resources, which will help in balancing the revenue and capital expenditures in the defence budget. This can be achieved by working in a time-bound manner towards commonality in procurement, logistics and administrative issues, which are not service-specific, for the Army, Navy and Air Force.

There are many such areas that require a merger and a patient examination for all three services, ensuring that there is no repetition and wastage of effort. These need to be pursued vigorously, overcoming procedural and service-centric hurdles.