Is there a case to be made for privatisation to help the government raise funds and reduce its fiscal burden and avoid having to recapitalise them every now and then? It is based on an entirely faulty understanding of why the govt needs to own banks. Banks are instruments through which capital flows into the economy. 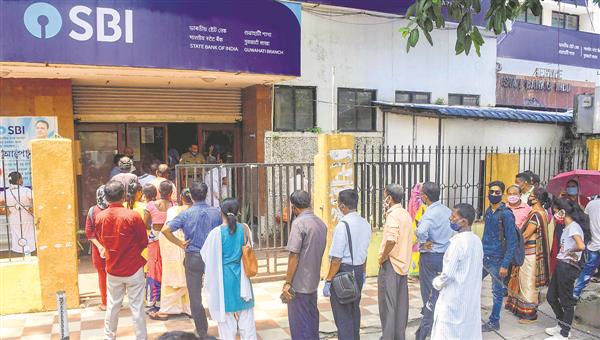 Savings safe: Depositors in public sector banks know that even if their banks are in trouble, the government will come to their rescue.

Bank privatisation is a hot topic again. It kicked off when Finance Minister Nirmala Sitharaman hinted that the government would like to have at least one company in each strategic sector and sell off everything else. That meant, except for a couple of big government banks, the others could be put on the block. In the past week, the privatisation chorus has become louder. The NITI Aayog was reported to have suggested that three government banks — the Punjab & Sind Bank, UCO Bank and the Bank of Maharashtra be sold off. An RBI director proposed that the government reduce its shareholding in public sector banks (PSBs) to 26 per cent. And, former RBI Deputy Governor Viral Acharya recommended that ‘healthy’ government banks should be privatised.

There are three key arguments for privatising PSBs. The first is that the private sector is more efficient, and a private owner will cut the flab in government banks and make them more profitable. The second is that the government needs money and selling its shares in the banks it owns will help it raise funds. Finally, there’s the issue of NPAs or bad loans. Government banks are saddled with loans which are unlikely to be paid back. It means that at some point, the government might have to ‘recapitalise’ them. Pundits say taxpayers will end up paying for mismanagement by government banks. So, privatise them and everything will be fine.

It is ironical that this pro-privatisation campaign is coming at a time when three of India’s top private banks have shown serious signs of mismanagement. ICICI Bank had to sack its MD after allegations of nepotism in giving big loans. Yes Bank was almost going under and had to be saved by the government’s own SBI. Now, HDFC Bank is under a cloud over conflict-of-interest allegations in its auto-loan department. Reports also suggest that Experian Plc, one of India’s largest credit bureaus has told the RBI that HDFC Bank hasn’t given details about its retail loans in time. So much for private sector efficiency!

The larger question is: who is responsible for the current state of government banks? The government itself. And, it is not because PSBs were forced to fulfill welfare functions, for which banks were supposedly nationalised 51 years ago. As the Modi government’s own Economic Survey of 2016 pointed out, the private sector-driven economic boom from 2004 to 2008 was overwhelmingly funded by PSBs. The boom years focused on building infrastructure and expanding capacities in steel, mining, power, telecom, textiles and aviation. As TT Rammohan Rao of IIM-A showed, at the end of 2014, these stressed sectors accounted for 29 per cent of all advances given by PSBs, but only 14 per cent of advances at private banks.

Was this because government banks took foolhardy decisions to lend, or was it because they had to back government policy to help private companies finance their infrastructure and manufacturing projects? It is common knowledge that many industrialists — some of whom are on defaulter lists today — used political contacts to get easy loans. Private corruption is now being passed off as a systemic problem with government ownership. Instead of reforming the management of these government banks and taking it away from the oversight of netas and babus, the proposal is to sell it to the same corporates who gained the most from the loose lending norms of PSBs.

Is there still a case to be made for privatisation to help the government raise funds and reduce its fiscal burden and avoid having to recapitalise them every now and then? This idea is based on an entirely faulty understanding of why the government needs to own banks. Banks are instruments through which capital flows through the economy. They collect public savings and use that as a notional base to create money, which is then lent out for consumption and investment. Who the banks lend to determines who gets access to a nation’s savings and capital. Privatisation backers say the market is the most efficient allocator of capital. The history of India’s banks shows the exact opposite.

Before bank nationalisation, a few corporate houses controlled all funds, credit flowed into speculation and the agriculture sector had virtually no access to credit. Nationalisation ensured that a large chunk of India’s population could access banking facilities, farmers got loans and the state could direct the flow of credit to priority sectors. Public sector banks, therefore, have a social role which is larger than their quarterly profit & loss statements. Selling them amounts to diminishing this social role and public control of the flow of capital.

Instead of privatising PSBs for fiscal firefighting, the government should stand up to international financial institutions and postpone Basel III compliance norms. They are meaningless in the Indian context, especially when it comes to a PSB’s capital requirements. Depositors in government banks know that even if their banks are in trouble, the government will come to their rescue. That is why, when the 2008 global financial crisis hit India, many middle-class depositors decided to open accounts with the State Bank of India, and shifted some of their money out of private banks to ensure that their savings were safe.

As economist Prabhat Patnaik has argued, even if the government needs to recapitalise PSBs at any point, it will simply have to make a ‘paper’ borrowing from the RBI. Since banks would never really have to dip into their capital base, the government’s borrowings would simply remain with the central bank. Thus, even though it would affect the government’s fiscal deficit accounting, in real terms it would not make an iota of a difference to the economy. There is no economic reason to privatise government banks. It is only a means to hand over public assets to the richest few, so that they can control all capital flows in the economy.