No lessons learnt from past flood disasters

Along with better forecasts, we need better monitoring and reporting of actual rainfall, water levels in rivers and incidents of landslides. More timely and location-specific forecasts that would enable the disaster management authorities to take the necessary advance actions would help. Such emergency action plans would follow only if there is a functional, accountable and participatory disaster management mechanism in place. 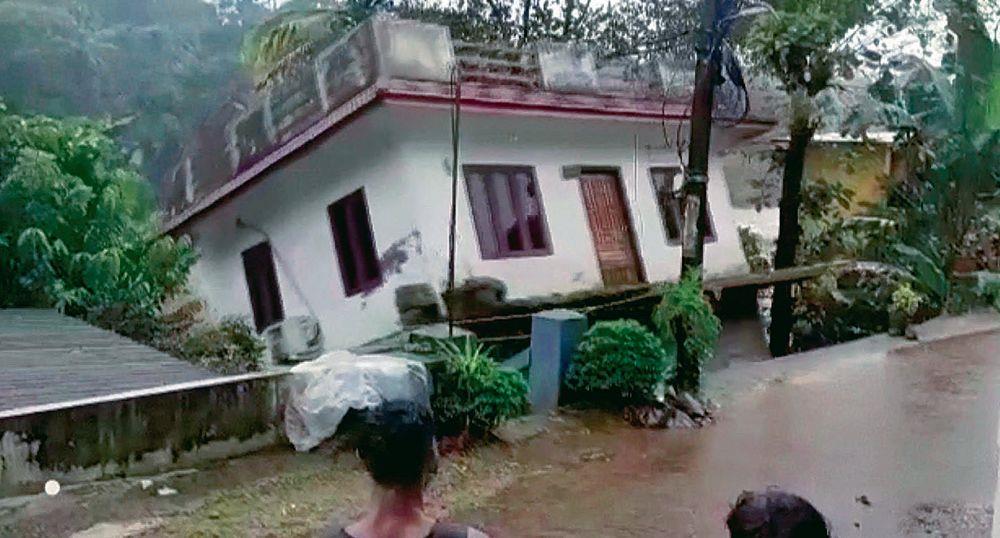 This month’s flood disasters in two states distant from each other — Kerala and Uttarakhand — have a lot in common. Both happened after the end of the normal dates of the south-west monsoon. It was a repeat of earlier such disasters in the respective states. In both cases, there were reports by experts warning about the disasters. The rainfall events were broadly along the lines warned by the climate scientists. But the states were ill-prepared to cope with the situation. Inappropriate human interventions worsened the disasters in major ways. Disaster management seems to be absent from the ground. In both cases, more precise forecasts about the rainfall quantum and location would have helped.

Over 250 people have lost their lives in these floods in Kerala, Uttarakhand and contiguous areas of Uttar Pradesh and Nepal and the damage is likely to go past Rs 10,000 crore. The disaster is also extending to Sikkim and neighbouring sub-Himalayan West Bengal areas. The full scale of the disaster is still unfolding. The floods have some unprecedented aspects, but that cannot be any justification for the lack of preparedness.

For example, the rainfall at a number of locations has crossed recorded figures, including in Nainital, Mukteshwar, Pantnagar and Pithoragarh. The river water level crossed the highest flood levels at many places, including Pancheshwar, the Banbasa barrage, Ghat and Paliakalan (all four sites along the Sharda river) and Deoprayas and Karanprayag (both along the Alaknanda river). In Kerala, the water level crossed the highest flood levels along the Manimala river in Kottayam district and along the Kodiyar river in the neighbouring Kanyakumari of Tamil Nadu.

Madhavan Rajeevan, former secretary, Ministry of Earth Sciences, says that there were clear forecasts of heavy rains in Uttarakhand and Kerala, but the absence of disaster reaction mechanisms at local levels, advanced landslide prediction systems and some basic ground work of evacuation from the low-lying vulnerable areas resulted in the loss of lives and properties.

Along with better forecasts, we need better monitoring and reporting of actual rainfall, water levels in rivers and incidents of landslides. It was disturbing, for example, to see that the IMD’s daily district-wise rainfall report showed ‘no data’ for Bageshwar and Pithoragarh districts of Uttarakhand on October 20 in the midst of the disaster. Its river basin-wise reporting of rainfall has been persistently callous and problematic for years, but the IMD seems to be making no amends. It needs to understand that reporting the rainfall along hydrological units like river basins and sub-basins is vital.

Moreover, more timely and location-specific forecasts that would enable the disaster management authorities to take the necessary advance actions would help. Such emergency action plans would follow only if a functional, accountable and participatory disaster management mechanism is in place.

Such actions would include advance water releases from dams, shifting of vulnerable people from landslide-prone areas, ensuring sufficient stock and distribution of essential items.

In Kerala’s flood disasters of 2018 and 2019, the inappropriate operation of dams played a significant role, as it has happened at many other places, including Uttarakhand. But there is no transparent or accountable mechanism in place to either learn lessons from such events or hold accountable those responsible for such wrong operations. Neither the Central Water Commission (India's official flood forecasting body) nor state water resources departments are legally required to publicly display the rule curves for dams and how the actual dam operation compares with it.

By consistently ignoring the recommendations of the Madhav Gadgil Panel, Kerala politicians have ensured that the state will continue to face disasters.

In fact, the CWC's flood forecasting performance is pretty pathetic and it is doubtful if it can contribute to flood management, as also considering the lack of independent oversight or accountability.

It's been more than a decade since climate scientists have been telling us how the rainfall is intensifying, their timing and locations are changing, as has also been clear from our experience over the years. In Uttarakhand, scientists have recorded over 7,500 extreme rainfall events since 2015. The Himalayas are warming faster than the average warming experienced across the world. Snowlines are going up and rainfall is increasing at higher altitudes. Similarly, Kerala has faced the third major flood disaster in four years. The warming of the Arabian Sea has led to a 52 per cent increase in the frequency of cyclonic storms.

So, our disaster management plans, mechanisms and governance should have been prepared for this, but we are far from prepared.

As part of better disaster governance, we need to identify the vulnerable locations, assess their vulnerabilities and prepare appropriate policies and plans.

One of the key steps has to be to ensure that we do not increase the vulnerabilities of these locations by our actions. All development projects and plans that are increasing the vulnerabilities by the destruction of ecology and land use change should be reviewed and reversed.

We are, in fact, doing the opposite. We are continuously increasing the disaster potential of the vulnerable areas in Kerala, Uttarakhand and elsewhere by inappropriate interventions in the name of development.

So, we continue to push disaster-enhancing, unviable hydropower projects, build highways without assessing impacts or looking for less damaging options, continue with indiscriminate and unsustainable mining, blasting, deforestation, keep encroaching on river beds and floodplains, and keep dumping muck and waste into the rivers. All of these are majorly contributing to increasing the disaster potential of the already vulnerable Himalayas and the Western and Eastern Ghats.

It should be clear that the climate change-induced disasters are taking a heavy toll of society and economy. We may be good at saving people once the disaster sets in, but we are pathetic in being prepared to prevent avoidable disasters.

One of the things that can help is to learn lessons from past disasters. For that, a basic requirement is to institute an independent assessment of each such disaster which would tell us what all happened during the disaster and who played what role. Such a credible objective assessment would also tell us what lessons the disaster provides for us.

Do we have the benefit for such an assessment of, say, the June 2013 Uttarakhand disaster or the 2018 Kerala floods or, for that matter, any other disaster? If not, how can we even start the process of identifying the lessons we can learn from a disaster? Till we change this situation, we are possibly destined to experience a repeat of the worst kind of disasters.