No more than dummy PM : The Tribune India

No more than dummy PM

Imran Khan may pretend to be in charge, but even foreign policy is not in his hands 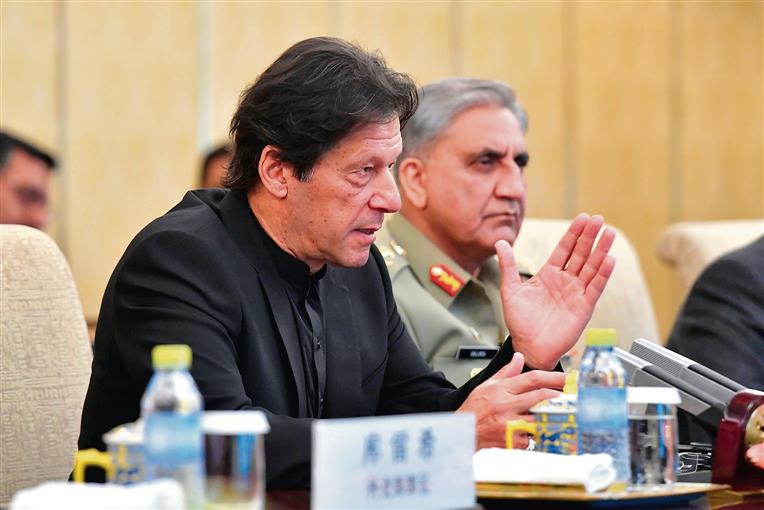 At mercy: A protege of the army, Imran Khan will be discarded when it so chooses.

Whenever I analyse the policies of PM Imran Khan, my mind goes back to meeting Imran, the cricketer, when I was India’s Consul General in Karachi in 1982. I had hosted a reception for the visiting Indian cricket team led by Sunil Gavaskar. Members of the Pakistan cricket team also attended the reception. The Consul General’s residence was located opposite the residence of Benazir Bhutto. She was then under arrest, ordered by military ruler, Gen Zia-ul-Haq. (Dawood Ibrahim now lives royally in the nearby Defence Housing Society). Imran devastated our batting in that series. Gavaskar and Mohinder Amarnath were among the few batsmen who read and played Imran’s devastating reverse swing consistently and confidently.

Karachi was a cosmopolitan city, where one could chat with Pakistani friends over drinks. I asked a friendly Pakistani commentator what motivated Imran to bowl with such venom. I was told that when Imran was asked why he bowled with such fire against India, he replied: ‘I do not regard it as a game. I think of Kashmir and regard it as a jihad.’ Imran’s reverse swing came into play, primarily after lunch and tea breaks, when the ball was in the pockets of Pakistani umpires! Scratching one side of the ball was known to make it swing. Gavaskar and others had noted this.

Pakistan has produced great fast bowlers like Wasim Akram, Waqar Younis and Shoaib Akhtar, who played tough and hard. But unlike Imran, they never treated the game as a ‘jihad’. They were friendly to Indian players. Imran’s politics was moulded by one of the founding members of his Tehreeq-e-Insaf Party, Lt Gen Hamid Gul, who was a hardcore Islamist and a former Director General of the ISI. Gul played a key role in backing militants in Afghanistan. He also backed militancy in Punjab and J&K. Imran was voted to power with the backing of the military establishment and the ISI, who were finding that PM Nawaz Sharif was trying to act independently on relations with India and Afghanistan.

While his predecessors looked the other way, as the ISI backed the Hurriyat and militant groups in J&K, Imran made no secret about his kinship with the Taliban, Hurriyat, and militant Islamic groups, like the LeT. It is not surprising that he is now set on conferring Pakistan’s highest civilian honour, the Nishan-e-Pakistan, on Hurriyat patriarch Syed Ali Shah Geelani. India had political space in the past for contacts at the highest levels in Pakistan. Pakistani prime ministers kept contacts open with their Indian counterparts. We are now dealing with a Pakistani leader who makes no bones about his backing for Islamist militancy. He even described Osama bin Laden, the mastermind of the 9/11 strikes on New York, as a ‘martyr’.

While he may pretend to be in charge of foreign policy, it is the army chief Gen Qamar Javed Bajwa, who calls the shots. Bajwa actively participated in efforts for President Trump to end US combat operations in Afghanistan, before the US presidential elections. When Imran met Trump in July last year, he became the first Pakistan PM who was accompanied by his army chief for a White House meeting with the President. The public profile of Bajwa, whose tenure was extended by three years, till 2022, has risen steadily.

The army now directly calls the shots on developments in Afghanistan after Bajwa made an impromptu visit to Kabul and met President Ashraf Ghani on June 9. The visit was at the behest of US special envoy Zalmay Khalilzad. Diplomatic practices and pretences have now been discarded. It is Bajwa and not Imran who leads the effort for Trump on troop withdrawal. It matters little to Trump if what follows after poorly planned American withdrawal is a return to civil war in Afghanistan, as the Taliban are not given to sharing power with others. Moreover, the Taliban are not trusted by the non-Pashtun population.

It is evident that the army is determined to cut an obviously incompetent Imran to size. The high-profile former army spokesman Lt Gen Asim Saleem Bajwa has now been appointed as Imran’s special assistant for information and broadcasting. He is now Imran’s de facto spokesman. He has also been appointed chairman of CPEC authority. In short, he not only speaks for the government, but also controls the massive funds flowing into the project. There are reports suggesting that Bajwa was appointed after Xi Jinping indicated that he was not satisfied with Pakistani decision-making in CPEC.

The marginalisation of Imran and the civilian government is evident in other areas also. The army now plays a decisive role in the National Command and Operations Centre headed by the federal planning minister. The executive head of the command centre, Lt Gen Hamood Uz Zahman Khan, is an air defence officer. Meanwhile, the National Locust Control Centre is headed by another Lt Gen. Imran, a long-term protege of the Pakistan army, has become the army’s puppet. He will be discarded when the army so chooses. The Chinese have known this for years. They are reconciled to the fact that civilian leaders like Imran are dispensable.

India is right in not rushing into a formal dialogue with Imran. He is not only pathologically anti-Indian, but also is merely a front for the Pakistan army. In these circumstances, it may be worthwhile to open an unannounced and appropriate channel of communications with the Pakistan army. One cannot realistically expect much to emerge from such a back channel, especially given tensions in the Kashmir valley and Ladakh, but a ‘back channel’ for communication, or dialogue, has its own utility, even in difficult times, and particularly during tensions.