No room for absurdity 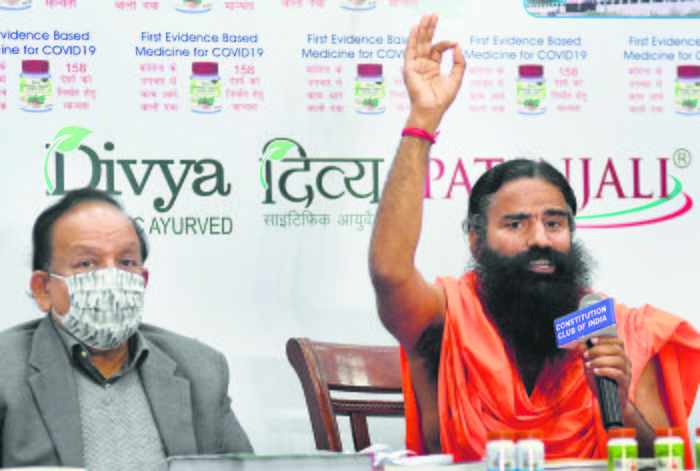 Side by side: Ancient systems of health and modern medicine have to complement each other and not be antagonistic. Tribune photo

Baba Ramdev’s controversial diatribe against the allopathic doctors was simply wrong. It was also completely unnecessary, especially in these Covid times, when they continue to, with great commitment and courage, serve the people. They have been in the forefront of the effort to contain the pandemic. In this process hundreds have lost their lives. PM Modi has, on numerous occasions, recognised their enormous contribution. He has fittingly expressed the nation’s gratitude to the medical community which overwhelmingly consists of allopathic doctors and paramedical staff.

A most distressing part of the current controversy is the possibility of misperceptions being generated by the 25 questions posed by Ramdev to allopathic doctors regarding the efficacy of their medical systems. There is merit in the traditional schools of medicine to promote health, but it is an undeniable fact that contemporary global health systems are based on the allopathic school of medicine. It is this system which has helped to control ancient scourges and for raising standards of health worldwide and the longevity of human populations. This does not mean that it is perfect or that it has been able to find answers to all issues of health. Indeed, there are gaps in medical knowledge in many areas, but modern doctors are the first to admit this fact. The Covid pandemic is a case in point. It is caused by a new virus and allopathic medical science is continuing to work on preventives and therapeutics. Some headway has been made in the area of preventives through the development of vaccines relatively swiftly using emergency protocols. These are yielding good results. These should not be decried to sow doubts about the vaccines in people’s minds.

Modern Indian doctors have a well-earned worldwide reputation. That has led to Indian hospitals attracting thousands of patients from the subcontinent and beyond for treatment. Nothing should be done to shake the confidence of these patients, for that will make a dent in India’s soft power. There is no contradiction in this aspect of India’s soft power and that which derives from yoga. The UN General Assembly recognised in its Resolution 69/131, which designated June 21 as the International Day of Yoga, that ‘yoga provides a holistic approach to health and well-being’.

Thus, ancient systems of health and modern medicine have to complement each other and not be antagonistic. Modern medicine proceeds on the basis of scientific enquiry and a rigorous examination of evidence on the basis of verifiable methods. The same principles guide all the physical and even social sciences. Naturally, as the evidence changes so do conclusions. That is how the development of knowledge occurs. This does not mean that human beings always act on the basis of proven knowledge; human nature is full of contradictions. However, progressive leaders always seek to take their people on the path of science and reason and attempt to establish institutions to help in the evolution of scientific thought. They want reason and logic rooted in science to act as guides to society. They want their people to look forward even while taking pride in their ancient accomplishments.

It was India’s good fortune to have such a leader in Nehru, whose 57th death anniversary was marked on May 27. India is passing through a time when Nehru and his legacy are being almost continuously attacked. His domestic and foreign policies are not only being criticised, but also being derided. There is no doubt that Nehru erred in many specific policy areas and, in hindsight, it would have been preferable if he had made other choices, despite the constraints of the immense problems that the country faced in the first decade of Independence. Certainly, in the foreign policy area his approach to Pakistan and China should have been different at various stages of his prime ministership. Also, in the sphere of security policies Nehru should not have neglected the modernisation and expansion of the defence forces, even if that had meant devoting more scarce resources for this purpose. In the midst of these evaluations what cannot be denied is this: he was determined to make Indian society more progressive and egalitarian through the pursuit of modern science and technology and a more equitable distribution of wealth and income.

One of the causes of India falling in the grip of Western colonialism was the advances made in Europe in science and technology resulting in the first Industrial Revolution. This augmented European power at a time when Indian science was stagnating. The inevitable lesson that Nehru and other progressive leaders of the freedom movement drew was the need to get India into the forefront in the areas of science in technology as part of the process of social and economic modernisation.

Nehru was guided by this thought all through his political career and sought to implement it during his 17 years as PM. Unlike most de-colonised countries, India established scientific and technological institutions in some cases with foreign assistance. Some of these institutions gained international acceptance for excellence and their alumni gained international recognition. These included doctors trained in Indian medical colleges. While setting up the institutional structure for science and technology Nehru also urged Indian society to foster a scientific temperament which would enable it to advance in the modern era.

It is vital today, as the digital revolution is transforming the world in hitherto unimaginable ways, to advance Nehru’s vision by making India an authentic centre for scientific and technological research. That will require singular focus, will and the commitment of far greater resources by both the government and the private sector. That also means that national energy cannot be spent on debates of the kind generated by Ramdev.

One last point: Nehru was a votary of yoga and practised it for a major part of his life.