Not a licence to kill : The Tribune India

Not a licence to kill

The government should review AFSPA in Nagaland and other NE areas 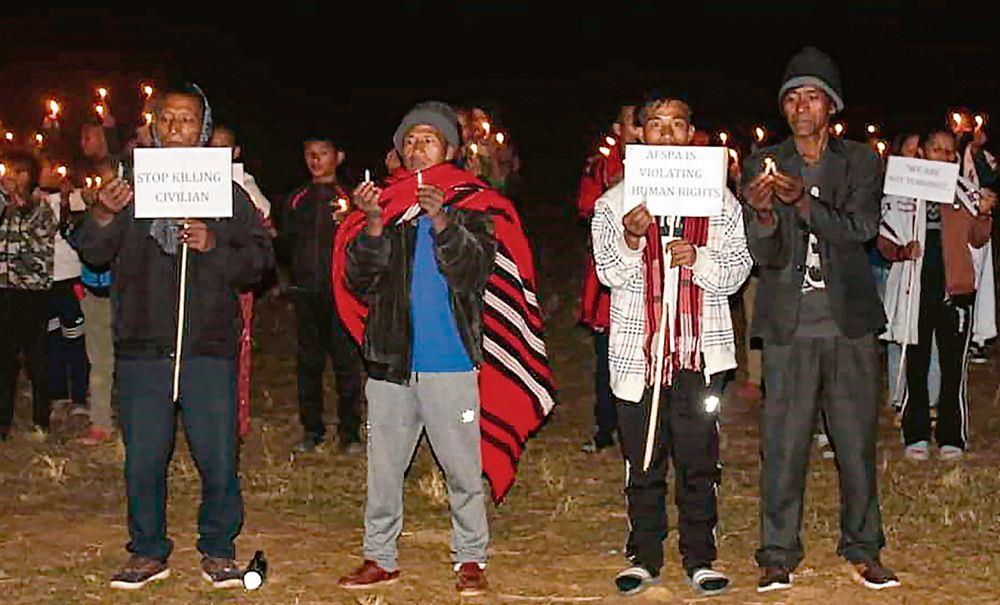 Way forward: The ideal solution is to expand the state police and use homegrown units of the constabulary to deal with insurgency situations. PTI

Many of my former colleagues from the IPS, and even some serving officers, could argue (and legitimately so) that I have no business pontificating on something I have not experienced myself. I confess I have never personally served in the Northeast. As DIGP in the CRPF in the 1970s, three of the eight battalions that were being supervised by me were deployed in that region, one in Mizoram, another in Tripura and a third in Sikkim. But that was just vicarious experience.

My close friend Chaman Lal of the Madhya Pradesh cadre, whose path I first crossed when I headed the Punjab Police at the height of the Khalistan movement, was the DGP Nagaland in the 1990s. The Chaman I know has always been conscious of people’s sensibilities in each place he served. Service to the people has always guided every action and decision he took.

After reading Patricia Mukhim’s (editor, Shillong Times) op-ed piece in a leading English daily, I spoke to Chaman before sitting down to write. He remembered an almost identical incident in Nagaland in 1994-95 involving a Rashtriya Rifles (RR) unit and innocent civilians. As DGP, he had taken a very strong stand against the excessive force used in that operation and supported the locals in their demand for a high-level independent probe.

The Army is not trained to deal with the country’s own citizens turned rogue. It has been trained to deal with hostile enemies. It has been trained to kill. To expect the Army not to use their weapons in some circumstances is basically unjust. I have always felt that the use of the Army within the country when fighting internal battles is a path to be seriously avoided. The RR was raised to get over this hurdle. Unfortunately, to this day it carries all the trappings of an Army formation. The jawans are ex-Army soldiers who had completed their enlisted service and their officers likewise are serving Commissioned Officers who are at the fag end of service. The propensity to use their lethal weapons is embedded in their psyche.

The ideal solution, therefore, is to expand the state police and use the homegrown units of the constabulary, armed and trained for combat of the kind experienced in insurgency situations. Good leadership would be a sine qua non to ensure loyalty and obedience to orders. But the red rag that Patricia Mukhim speaks about, the distinct feeling now exhibited by our troops and the paramilitary that the hill tribes are not one of us and are ‘aliens’ or the ‘other’, will not arise when the combatants are both tribesmen fighting on opposite sides.

I am reminded of my days in Punjab. Khalistani terrorists and the Punjab Police were both sons of the soil. Yet, they fought one another like all good soldiers do, with all their heart and soul. Cases of crossing over to the opposite side were rare. The whole pillar rested on the quality of leadership. And fortuitously, ‘lobbying’ for positions of leadership quietly disappears during times of mortal combat.

Chaman is of the firm view that AFSPA should be withdrawn from Nagaland, and by extension, from the Northeast. It has outlived its utility if the epithet of utility could be applied to it at any time. The Act was introduced in Disturbed Areas of the country where armed insurgents or Maoists or armed terrorists were operating against the State. The Army, whenever and wherever it was inducted, made it a mandatory condition for its entry into civilian terrain. The Army’s logic for insisting on this legal protection against possible entanglement with the law was unexceptionable. It argued, and rightly so, that its officers and men were not schooled in legal niceties, like the police were. They were being pitched into combat with men armed like them with deadly weapons. If they made a genuine mistake, like they say is the case in Mon, they need to be saved from the hassle of a murder trial, an event that is not catered for during times of war.

This logic is difficult to demolish. Another celebrated IPS officer, Prakash Singh of the UP cadre, who served as DGP Assam, advocates due caution when judging the entire episode. But Chaman, who has experienced life in Nagaland, counters the argument. He contends that such a licence to kill can never be open-ended. In the AFSPA itself safeguards are listed to prevent abuse. These are conveniently overlooked by operational Commanders, smug in their understanding that the law and their own superiors will not only forgive any transgressions, but also raise them on pedestals.

In the Mon case, for instance, why was the ‘pinpoint’ intelligence not verified, he asks. If there was no time for that, why was the vehicle not surrounded and the passengers told to get down with arms raised to verify their credentials? This should have been the sensible drill in these circumstances, but instead, it appeared that there was a deeply harboured motive of revenge for the ambush and brutal murder of an Assam Rifles Commandant, his wife and young son that informed their actions.

A much-decorated unit of the Army’s Third Corps was involved in this botched operation. I am truly sorry for the Major who led the operation and his men who followed his orders. They certainly did not intend to kill innocent civilians. And those killed were certainly not involved in insurgency. They did not deserve to die.

The government is in a Catch-22 situation. It may have to capitulate to the demand for repeal of AFSPA in Nagaland and other NE areas. If it does not, it risks losing the support of the Naga, Mizo and Meghalaya political parties now aligned to the BJP. Worse, there is an even bigger danger of the fragile peace of the past two decades being disturbed. That would be disastrous.