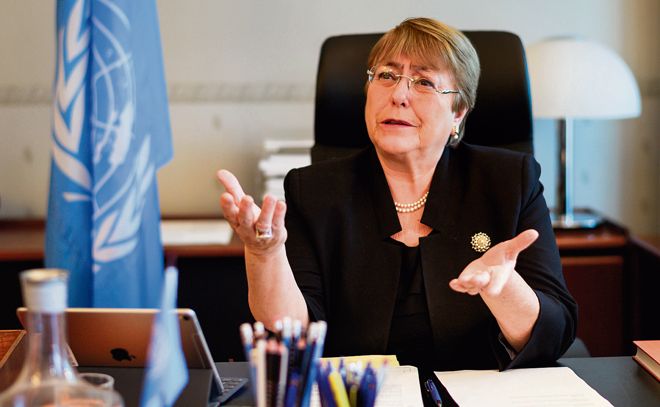 For rights’ sake: The intervention plea by Michelle Bachelet seeks to root itself in instruments which instruct States to shun discrimination based on origin or legal status.

On March 3, the Ministry of External Affairs (MEA) stated that the previous day Michelle Bachelet, United Nations High Commissioner for Human Rights (UNHCHR), informed the Indian Permanent Mission in Geneva that ‘her office had filed an intervention application in the Supreme Court of India in respect to the Citizenship Amendment Act (CAA)’. Bachelet is a former President of Chile and in that capacity had visited India in 2009. She took over as the UNHCHR in 2018 and, like her predecessors, has sought to expand the High Commissioner’s mandate.

Reacting angrily, the MEA stated that the CAA was an ‘internal matter’ and related to the ‘sovereign right’ of Parliament to make laws. It emphasised that ‘no foreign party has any locus standi on issues pertaining to India’s sovereignty’. This blanket rejection is generally valid. However, as the UNHCHR acts under the mandate provided by the UNGA Resolution 48/141, and as she cited her mandate as the basis of the intervention in her draft petition, it would have been appropriate for the MEA to give its finding on her mandate’s ambit. In any event, can a UNHCHR inject herself in matters such as the CAA?

The resolution obliges the UNHCHR to ‘respect the sovereignty, territorial integrity and domestic jurisdiction of States’ while promoting and protecting all human rights within the framework of the rights structures as established through the UN Charter and a plethora of resolutions. It also mandates the UNHCHR to engage in dialogue with ‘all governments’ to ‘secure respect for all human rights’. The term implies the executive branches, not the courts of States. Thus, a plain reading of the resolution would indicate that an advocacy function would have to be with or through the executive branch. The UNHCHR should not therefore seek to submit direct interventions in domestic courts, even though the courts of some countries and the EU courts have allowed such interventions.

The intervention seeks to root itself in rights instruments which instruct States to shun discrimination based on origin or legal status. In dealing with migrants the relevant instruments stress non-discrimination irrespective of nationality. Bachelet concedes that States have ‘broad discretion’ in granting citizenship but argues that ‘such sovereign power is not unfettered and must be exercised in conformity with applicable human rights obligations’. She also admits that ‘not all differentiation, exclusion, restriction or preference of treatment constitutes discrimination or lack of equal treatment or protection before the law’. However, she asserts that measures that ‘constitute a difference in treatment’ have to conform to the law; pursue a legitimate objective; and are proportional to the objective pursued.

Significantly, Bachelet notes that India is right in finding that Pakistani, Afghan and Bangladeshi religious minorities suffer persecution. As she puts it, ‘The factual basis for the arguments provided in the Statement of Objects and Reasons’ of the CAA ‘finds support in the pronouncements by the UN human rights mechanisms regarding the situation of religious minorities in Afghanistan, Bangladesh and Pakistan’. Where she differs from the CAA’s statement is in the extent of protection which Islam, the State religion in all three countries, provides to Muslims themselves. She asserts that ‘there exist a number of religious groups considered religious minorities in these countries, especially of the Muslim faith, including Ahmadi, Hazara and Shia Muslims whose situations would warrant protection on the same basis as that provided in the preferential treatment proposed by the CAA’. She asks ‘if the differentiation made with regard to persecution on religious grounds, as opposed to other grounds, is sufficiently objective and reasonable’, particularly if it would lead to deportation.

The UNHCHR’s intervention is not the first before an Indian court. Two months ago, the UN Special Rapporteur on contemporary forms of racism, racial discrimination, xenophobia and related intolerance filed an intervention petition in a case in the Supreme Court relating to the deportation of the Rohingya. The court has sought the government’s views. The matter is due to be heard shortly when perhaps the government’s views will be known. It is almost certain though that the government will not favour intervention on account of the stand it has taken against the UNHCHR’s move in the CAA case.

Indian courts do consider the decisions of foreign courts while considering similar constitutional issues. Courts of foreign countries, including Pakistan, have looked to the Indian SC decisions, too. However, these processes stand on a different footing from the SC allowing a UN official/institution to make an intervention in domestic decision making, and more importantly, in lawmaking. That will need a very outward-looking mindset, which the court is not currently displaying.

It is different matter altogether if Indian parties before the court make the same arguments as the UNHCHR. The essence of the argument would lie in not seeing a religion, even a State religion, as a monolith. Even if theoretically it is construed as a monolith, the reality is far from removed; minority sectarian sects within it are persecuted. This is especially true of the Ahmadis in Pakistan, who are not even allowed to call themselves Muslims. There is also the issue of atheists and agnostics which is not covered by the CAA.

Ultimately, the intervention does not question the basis of the CAA. Its critique is that it should also take other persecuted sectarian minorities of Afghanistan, Pakistan and Bangladesh into account. That is a point the SC would have to consider, even if it takes no heed of the intervention itself.