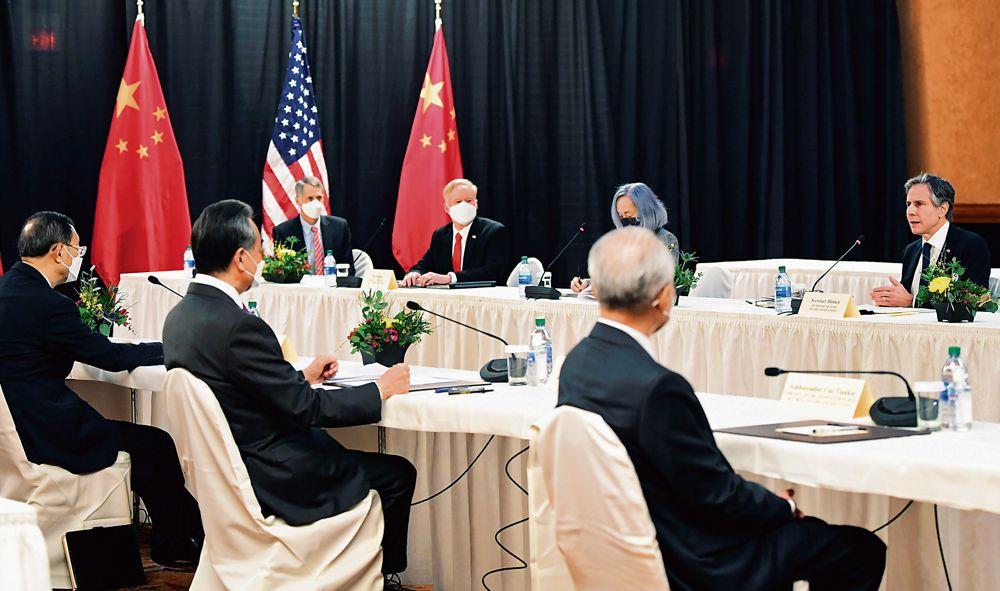 Face-off: If the US objective was to put China on the defensive, the opposite has been achieved. Reuters

The US and China held their first high-level meeting, after the Biden administration took office, at Anchorage on March 18 and 19. The US was represented by Secretary of State Antony Blinken and NSA Jake Sullivan. China fielded Chinese Communist Party Politburo member Yang Jiechi and State Councillor Wang Yi. The meeting was expected to set the tone for US-China relations in a changing geopolitical landscape. Three observations are in order:

One, the meeting took place against the backdrop of a further worsening of the balance of power against the US. Not only in China, but also across the world there is a perception of China as the ascendant and still expanding power while the US is perceived as a declining power, though still deploying formidable economic, military and technological assets. The US felt necessary to come to the meeting after orchestrating a display of its alliances and partnerships, including the first-ever Quad summit. It also announced sanctions against several Chinese officials associated with the new restrictions on civil liberties in Hong Kong on the eve of the meeting. An American warship sailed through the Taiwan Straits around the same time. In contrast, China appeared confident enough in its own power to dispense with additional props to influence the outcome of the meeting. Yang Jiechi pointedly ridiculed Blinken's assertion that the US would approach the bilateral relations from a ‘position of strength’: ‘... the United States does not have the qualification to say it wants to speak to China from a position of strength. The US was not even qualified to say such things even 20 or 30 years back because this is not the way to deal with the Chinese people.’

Two, the Chinese interlocutors made a clear distinction between what the US and the West and India, too, call the ‘rules-based international order’, which they rejected, and instead upheld the international order based on the UN Charter. Clearly, China will play the geopolitical game by its own rules or, at the very least, will insist on negotiating new terms of engagement where its interests must be deferred to.

Three, while some analysts have welcomed plain speaking by US officials in front of the international press, this indulgence in full-blown rhetoric invited an even more aggressive riposte from the Chinese side. This should have been expected. If the objective was to put China on the defensive, the opposite was achieved. The polemical statements by the US officials were a departure from the normal protocol on such occasions when there is a polite exchange of pleasantries before the press before substantive talks take place behind closed doors. If the audience for these remarks was the American domestic constituency, it should have been expected that China would go one better for covering its own flank back home. One does not know what was the outcome of the substantive discussions but it is clear that the kind of competitive coexistence that the US may be envisaging going forward is unlikely. Putting convergent interests such as climate change in separate insulated boxes while sharpening confrontation on other issues of divergence is difficult to sustain in practice.

From the Chinese perspective, the US effort to shore up its alliances and partnerships in confronting China is seen as lacking in credibility. The chief argument put by China is that the US and its allies have deep economic and commercial interests in China which contradict the politics of confrontation. The US will have to find a persuasive argument to counter this. While decoupling in the high-tech sectors, such as semi-conductors, is a reality, this does not extend to the very broad spectrum of trade between China and its key developed country partners.

What is the outlook for US-China relations under the Biden administration? There have been occasions in the past when the US has been written off as a declining and spent power but it has displayed remarkable resilience and capacity for renewal. The opening of American relations with China in 1970 was seen by China, and even several US allies, as a means of counter-balancing an increasingly powerful Soviet Union. The end of the Vietnam War in defeat, and the delinking of the US dollar from the gold standard later in the 1970s, reinforced perceptions of relative decline. A decade later, a similar situation arose with the rise of Japan and the conclusion of the Plaza Accords which devalued the dollar vis-a-vis the Japanese yen and key currencies. When I was serving in Japan from 1986-89, one witnessed a sense of triumphalism, and even arrogance, not very different from what we see today in China. And yet this proved to be merely a prelude to the American unipolar moment that lasted from the end of the Cold War right up to the global financial and economic crisis of 2007-8. The trajectory of US-China relations will be determined in the main by the success of the Biden administration in what is called the ‘building back better’ economic strategy. US excellence in technology is still unmatched and no other power has the global reach that the US military has. Therefore, the key ingredients of renewal are certainly there. Biden has also understood the importance of countering the prevailing pessimism about democracy, including among democracies themselves. The authoritarian model exemplified by China has proved to be more potent than may have been expected. Whether democracies can regain their faith in democracy’s tenets remains an open question. This also implies that India must retain multiple options to deal with its most pressing challenges, including enhancing its developmental prospects, dealing with adversaries both on its northern and western borders and managing a fractious neighbourhood. Quad can only serve as one option and its credibility as a countervailing coalition in the Indo-Pacific remains to be established.