The stage is set for a high-voltage electoral battle in UP in the coming months. This is the moment when the state government must be held to account as regards its performance. This has acquired urgency as the BJP seeks to alter the very basis of politics to create a permanent ethnic voting bloc, privileging the majority community to establish Hindu dominance, with economic issues relegated to the background and matters of jobs, price rise and public health thrown out of the poll fray. 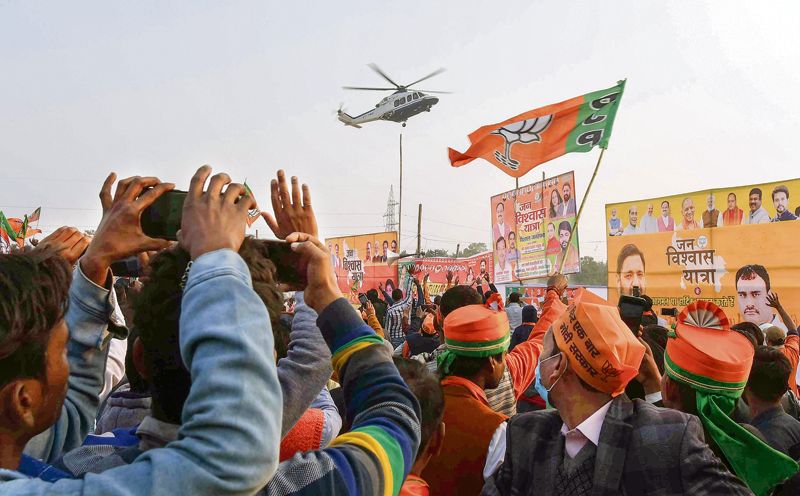 Fudged figures: Most development indicators belie UP govt’s claims of having ‘transformed’ the state under the Yogi regime. PTI 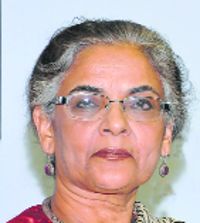 As Ayodhya, Varanasi and Mathura take centre stage in India’s weightiest state, it is clear that the ruling party’s campaign in the poll-bound Uttar Pradesh (UP) is centred on Hinduising the voters, rather than bothering about the economy or harmony. The Bharatiya Janata Party (BJP) and its lead campaigners are reluctant to focus on the track record of their double-engine government in the last five years. But they are never short on attacking past governments for lack of development and making exaggerated claims regarding development under their own government. That’s why, it is imperative to scrutinise the claims of the UP Government and the consequences of its divisive politics.

The state records one of the lowest growth rates in India. On most development indicators, UP ranks poorly compared to other states. It is economically backward and socially conservative. Even a cursory examination of the actual conditions of people would show no significant improvement in the quality of public life, health or education sectors or employment opportunities. Unemployment, lawlessness and the collapse of public infrastructure remain the calling cards of the state.

Even so, the BJP has been trying to portray UP as a ‘transformed’ state under its government. The UP Chief Minister had said in March 2020, while marking his government’s fourth year in office, that UP had been lifted from the ‘Bimaru’ (Bihar, Madhya Pradesh, Rajasthan and Uttar Pradesh) status to ‘Samarth’ (capable). But most development indicators belie these claims. UP was a ‘Bimaru’ state and it has remained so. If anything, it has worsened in some respects in the last five years.

An important indication that things have not changed much can be seen from the state’s per capita income, which has increased by just 0.43 per cent over the four years of this government as against the claim of 100 per cent growth. Per capita income was half (Rs 41,023) of the national average (Rs 86,659) in 2019-20 and the second lowest in the country.

But still, the UP Government has been putting out front-page advertisements in leading newspapers that the state is making great progress, even claiming that UP’s per capita income has doubled. These claims are based on figures of gross state domestic product (GSDP) in the budget documents of 2021-22, which was revised upward, implying an increase in growth over 2019-20.

But this is far removed from the official estimates of GSDP prepared by the Department of Economics and Statistics (‘Economic Growth in Uttar Pradesh in Recent Years’, Economic and Political Weekly, December 11, 2021).

Let us look at the two crucial indicators of health and women’s employment to gauge the state of development. UP is at the bottom of the 19 large states in the latest Niti Aayog health index for 2019-20. It is ranked the worst in institutional deliveries both in 2014-15 and 2019-20. The state was hit by the disastrous second wave of Covid-19. The state’s misery was reflected in oxygen shortages, failing public hospitals and visuals of hundreds of dead bodies buried hurriedly on the banks of the Ganga. UP is among the states with the lowest female participation in the workforce. It was less than 10 per cent in both urban and rural areas in pre-Covid-19 years and is unlikely to have grown since the pandemic. With 91 per cent of women out of the labour market in UP, they are among the poorest and most vulnerable. UP’s economy has clearly failed them in terms of meagre employment generation and the lack of associated income opportunities.

The dismal state of development has to be seen in the backdrop of the growth of Hindu nationalism which dominates politics and society in that state. UP has been critical to the public staging of the Hindutva project in a way that is not true of other states. The figurative significance of Ayodhya, Kashi and Mathura in this process as symbols of Hindu unity and as a wedge around which communal consolidation can take place cannot be underestimated. None of the other states quite have this cache. Currently, nation and religion are interchangeable in UP, but, ironically, the state is more divided and unequal than before. In fact, the ideologues of Hindu nationalism never ever refer to distributive justice or equity or improving the lot of the poor. They seek to unify the majority by disguising the true state of development or livelihoods with the lure of religious nationalism, which then becomes a mask to obfuscate the most significant inequalities.

The head of a mutt is the head of the government. Under his watch, the state’s descent into a communal cul-de-sac has gained momentum. Every day, there is a frontal assault on secularity, justice and decency. Add to this, the discrimination and intimidation of Muslims by the highest political functionaries and their total exclusion from public institutions, fusing the state with religion (of the majority) entirely. This underlines the inability of religious nationalism to conceive of equal citizenship and equal participation as the foundation of democracy.

The stage is set for a high-voltage electoral battle in UP in the coming months. This is the moment when the state government must be held to account as regards its performance. This has acquired urgency as the BJP seeks to alter the very basis of politics to create a permanent ethnic voting bloc, privileging the majority Hindu community to establish Hindu dominance, with economic issues relegated to the background and matters of jobs, price rise and public health thrown out of the electoral fray.

The politics of hate adversely affects economic activity as it overtakes basic issues. As a result, UP is struggling with the contradictions between the socio-economic needs of the people and the communal agenda of the regime.

Hindu nationalism has subverted the political vocabulary from democracy, rights, equality and deliberation to sacrifice, duty, victimhood, pride, law and order, cow protection, love jihad and conversions. This vocabulary undercuts the language needed for actually developing and implementing policies that would benefit the people.

The rights-based approach to development, where people get benefits as a right, rather than as an act of benevolence from the government, is the way to rescue UP and reverse the damages caused by the counter-revolution in the heartland of our democracy.