Not every changeover is as painless as the BJP’s ‘high command’ visualises, not every former state chieftain is as compliant as the Delhi bosses would want. Former Rajasthan CM Vasundhara Raje is back to being defiant despite Delhi’s assiduous efforts to marginalise her. Last week, Raje’s supporters, including some MLAs, launched a forum that called for declaring her as the CM nominee, though the polls are due only in 2023. 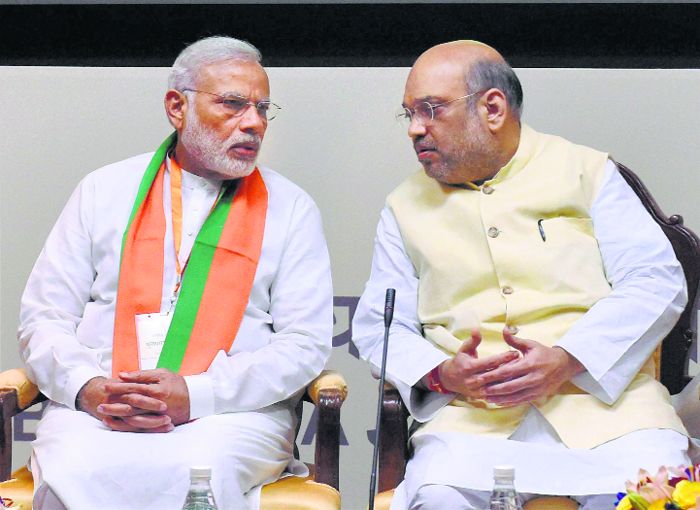 Command lines: There’s no doubt that Modi is in charge within the BJP. PTI

It is conjectured that with a visible ‘high command’ at the Centre, which is apparently unquestioned and unchallenged, the BJP is going the way of the Congress. Which is to say that the wheel of fortune will be spun by a single deity and the followers and the minions will lend their weight and turn the wheel his way, or perish.

Through its misfortunes, the Congress still has a determinate high command, seen in flesh and blood in the first family.

The BJP’s old structures, which never vested veto power in one or two individuals but spanned elaborate decision-making through a presidium that often involved state satraps (Prime Minister Narendra Modi was one when he was the Gujarat Chief Minister), survive in parts. Besides, it is hard to conjecture when the Rashtriya Swayamsevak Sangh (RSS), the BJP’s ideological parent and mentor, will assert its supremacy, perhaps looking for that chink in the party/government’s armour.

Therefore, the command lines in the BJP continue to be amorphous, unlike those in the Congress, but there’s no doubt that Modi, whose gravitational pull is indisputably strong, is the chief, the person in charge.

What happens if a state leader (the chieftains of the past do not exist anymore) clashes with the central command? The situation gets tricky.

Look no farther than the scenario that emerged in Himachal Pradesh after the 2017 elections. Prem Kumar Dhumal had positioned himself as the putative chief minister. He assumed that his old friendship with Modi, dating back to 1998 when Dhumal was the CM and Modi, a general secretary looking after Himachal, recommended him as the ‘natural’ choice.

Dhumal didn’t see the pre-poll smoke signals. The BJP refused to declare him as its CM candidate. Dhumal lost his seat and it should have forestalled his ambitions. Nonetheless, he harboured a sense of ‘entitlement’ that also came, in part, from the presumed patronage of his son and MP Anurag Thakur. Dhumal’s cheerleaders organised a show of strength when the BJP dispatched Nirmala Sitharaman and Narendra Singh Tomar to Shimla to elect the leader of the legislature party.

Dhumal was told in no uncertain terms that his adversary Shanta Kumar got many more of his candidates elected than him despite being pensioned off to the BJP’s margdarshak mandal. But he was reticent about it. Jai Ram Thakur was elected and the choice exemplified a seamless generational transition, regarded as a hallmark of the Modi-Amit Shah regime.

Not every changeover is as painless as the BJP’s ‘high command’ visualises, not every former state chieftain is as compliant as the Delhi bosses would want. Vasundhara Raje, former Rajasthan CM, is back to being defiant despite Delhi’s assiduous efforts to marginalise her. Last week, Raje’s supporters, who included some legislators, launched the Samartak Rajasthan Manch that called for declaring her as the BJP’s CM nominee right away, although the next elections are due only in 2023.

If Raje’s backers had stopped with the clamour, probably the ‘high command’ would not have lost sleep. However, on social media, they released a list of parallel state committees with their own office-bearers. It was a message to the central and state leaders (the latter are carefully chosen Raje critics and rivals) that she still had a significant base and following in the Rajasthan BJP and the repercussions of ignoring her could be grave. Raje’s name had been excluded from the posters of BJP events in the recent past.

Although the BJP has not begun nurturing another state leader, the perception is that Central minister Gajendra Singh Shekhawat is a favourite of Modi and Shah. Raje has tried to frustrate the efforts. A war of attrition is on and it remains to be seen if Raje survives like BS Yediyurappa, the Karnataka CM, or drops by the wayside.

Karnataka remains a pressure point on the BJP command, largely because warhorse Yediyurappa used every skill in the playbook of political endurance and trumped his in-house enemies to live another day. The leaders have not found an alternative to him. But he never had it easy in his tenures at Bengaluru’s Vidhan Soudha. He finally expanded his Cabinet last week after endless consultations with Shah and JP Nadda, the BJP president, hoping to buy peace with the legislators hungering for a slice of the power pie.

Most of them are defectors from the Congress and Janata Dal (Secular), with no use for an ideology coloured in saffron, blue or green. They wanted to become ministers, but Yediyurappa couldn’t please them all. The exercise left a bad taste after allegations of blackmail through an incriminating CD and Yediyurappa’s son ‘distributing’ positions surfaced.

Regardless of the veracity of the charges, the episode proved that the BJP’s credo of using means to justify the end of ensconcing in office and repudiating ethics has an unsavoury underside. The renegades were clear about what they wanted while switching political allegiances; the BJP wanted to pare their expectations and shoehorn them into a ‘system’ that will not brook ‘indiscipline’. The breach between promise and denial is rarely, if ever, healed but it could lead to instability.

The Karnataka scenario was replayed in Tripura, a state the BJP wrested from the Left Front with fanfare. Like in Karnataka, its first government in Agartala is sustained by turncoats from the Congress and the Trinamool Congress who are not ideologically motivated. The CM, Biplab Kumar Deb, who was never an MLA or an MP but was rooted in the RSS, cannot negotiate the interminable demands from his legislators and looks to Delhi for succour when up against a crisis.

There’s a lesson from Karnataka and Tripura for the BJP in West Bengal. Right now, it is acquiring a ‘trophy’ a week from the Trinamool Congress: prize catches of MPs, MLAs and ministers. The price to wrest and, importantly, retain power on its terms might be the biggest challenge for the BJP in the months to come.