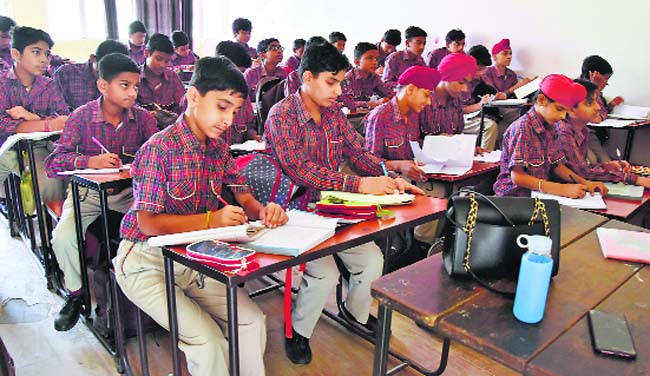 BIG PICTURE: The country needs many more schools, both government and private. Don’t jeopardise the cause of education by missing the forest for the trees. Tribune photo

Do private unaided schools in Chandigarh have any right to privacy? This issue arises in the context of the UT administration requiring schools to upload their financial statements on their website so that they may be available to students and their parents — in other words to the public. This, despite the schools furnishing their income and expenditure accounts and budget to the authorities concerned every year.

To set up a good private school entails a great deal of expense and effort. Why would anyone undertake such a venture if the government’s attitude is as it appears to be?

Apprehending that uploading financial information would render private institutions vulnerable to unbridled dissection of their accounts by the public, and possible resultant unwarranted attacks by parents and other busybodies which may create hurdles in the smooth functioning of the institutions, the private schools took the matter to the high court.

A Division Bench in CW 7706 of 2020 in Independent Schools Association Chandigarh vs Union of India, decided on May 28, upheld the direction of the UT administration regarding the uploading of the financial statements of private schools on their website. It was observed that the uploading of income and expenditure was sought by the administration on account of complaints received from parents regarding schools indulging in profiteering.

Further, it was observed ‘that neither the State Governments are considering the financial record submitted by the private institutions meticulously nor the officials go into depth of the account statements prepared by professional chartered accountants’, and added, ‘if the financial statement of private institutions is uploaded on the website of the institutions, the same will ensure transparency and will be an aid in achieving the goal of ensuring that no institution is indulging in profiteering and charging of capitation fee. It cannot be disputed that there are institutions which indulge in charging of capitation fee and indulging in profiteering. Since the accounts of institutions are prepared by professionals, we cannot expect the officials working in government departments to find out the truth beneath the financial statements.’

With respect, this reasoning cannot be expected to commend itself. It cannot be assumed that government officials are incapable of and do not scrutinise and understand the financial statements furnished by private institutions. Surely, governments do not ask for such statements merely to clutter up their offices. If any school is charging capitation fees or other unauthorised amounts, the departments concerned must be assumed to be capable of detecting it and taking suitable action.

What also seems to have influenced the court in directing schools to upload their financial statements was that some of them had already done so. If some schools may have done so, it does not mean that others too must do so, unless legally incumbent upon them to follow suit.

As is well known, not all private schools are charitable institutions nor are they required to be. There is, in fact, no bar on a private school to be set up as a business venture for profit. One wonders if saying that uploading financial statements of private schools does not breach their right to privacy would stand further judicial scrutiny. Be that as it may, the final word rests with the Supreme Court.

The country needs many more schools, both government and private, particularly those providing quality education. To set up a good private school entails a great deal of expense and effort. Why would anyone undertake such a venture if the government’s attitude towards private schools is as it appears to be?

It would be pertinent to recall here the observations of the Supreme Court’s 11-judge Constitutional Bench in TMA Pai versus State of Karnataka: ‘It is in the interest of the general public that more good quality schools are established; autonomy and non-regulation of school administration in the right of appointment, admission of students and the fee to be charged will ensure that more such institutions are established.’

Let not the cause of education in the country be jeopardised by the government missing the forest for the trees.